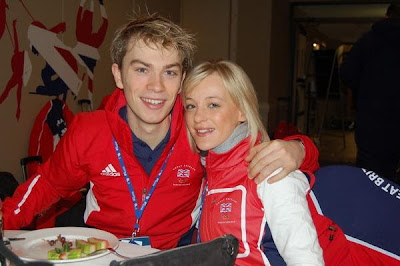 Only outnumbered by Russian and former Soviet teams, the Union Jack has been raised on the top of the podium at the World Figure Skating Championships in the ice dancing discipline a total of 17 times. Following in the footsteps of brilliant and captivating British ice dance teams like Jean Westwood and Lawrence Demmy, Diane Towler and Bernard Ford, Jayne Torvill and Christopher Dean and Sinead and John Kerr cannot be an easy feat by any stretch of the imagination. That said, with interesting and diverse programs and unquestionable technical skill, 3 time and reigning British champions Penny Coomes and Nicholas Buckland seem poised to do just that. With a 5th place finish at the European Championships last year, Penny and Nick have established themselves as a team to beat in international competition: a team on the move. They have progressively risen in the standings at both the European and World Championships every year and have posted strong results in Grand Prix events as well. Qualifying their country a spot at the 2014 Winter Olympics, this team hopes to make a second trip to the Olympics a reality this year and they have the skills and programs to do it. It was my pleasure to interview this talented team about their career to date, goals for the upcoming season and much, much more:

Q: You competed in the 2010 Winter Olympics in Vancouver, finishing in the top 20 and have made 3 trips to the World Championships and 4 to the European Championships. What have you learned most from competing on an elite level for so long and how do you apply the lessons you've learned to the ice every day?

A from Penny: Nick and I were lucky enough to compete at quite a few major events while we were ranked number 2 in Britain under John and Sinead Kerr. We were able to attend these competitions just to gain experience without too much pressure. After skating with each other for 8 years now and experiencing all of our ups and downs throughout the seasons together we have become and stronger team. We know how to work smarter to get the most out of each and every training session. I think that in particular qualifying and competing at the 2010 Olympic Games not only made us more hungry but it has given us a bit of an advantage going into this season. We know what to expect now, and we will perhaps be a little less starstruck than the last time. Competing in Vancouver made our dreams a reality, and we feel very honored to be able to do that again.

Q: Coming from a British family - my grandparents were from England and my father and uncle were born there - I have a lot of love for British skaters. As the defending British ice dance champions, you follow in the footsteps of Jayne Torvill and Christopher Dean. What is it like being compared to these skating legends and what do you appreciate most about them?

A from Penny: Nick and I have looked up to Torvill and Dean our whole lives. They were revolutionary in ice dance during their time, and they still are relevant now. Nick and I still watch their programs for ideas. We were actually lucky enough to skate with them last year at the Olympic Torch Gala in Nottingham. To be compared to the greatest ice dance couple of all time is nothing but an honor. 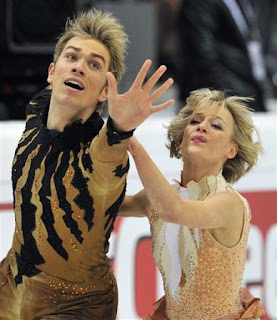 Q: How did you both meet and what is one thing about you most people may not know?

A from Nick: We both met when Penny’s step father came to coach at the National Ice Centre in Nottingham. Penny was then part of the skating school the same as me and she ended up at the same school too! We started skating together when  I decided I no longer wanted to free skate and we got on really well from day one. We enjoyed skating together and that’s why we are still going strong today. One thing you may not know about me is that I have a talented younger brother who is a junior skater at the moment. He and his partner are ones to look out for in the future.

Q: An error late in your program at Worlds cost you a little bit. What exactly happened in the free dance?

A from Nick: During Worlds, I experienced a heart arrhythmia, which I am in the process of getting sorted out. It's something that happens very rarely (maybe once or twice a year) but when it does happen it causes a racing heart and dizziness. Experiencing this meant that we ended up missing our spin in our free dance, which lost us points, and therefore dropping us three places. It’s nothing life threatening but something the doctors think that I can learn to control if I find myself in a similar position in the future.

Q:  How do you think Dancing On Ice has helped figure skating and ice dancing in Great Britain? Do you think this next season being the final one will hurt the sport?

A from Nick: I think Dancing In ice has done so much for the sport during the time it has been on ITV. I think the fact that it has finished is a real shame but I think in the years to come we will see a boost in high level skaters as a result of the increased levels of participation from Dancing on Ice.

Q: What has been your favourite program you've ever skated to?

A from Penny: Nick and I have been lucky enough to love and enjoy all of our programs but my favourite is easily our new free dance for this season. I found the music when we were looking for music for last season but we wanted to save it for the Olympics. Nick and I are skating to music from Cirque du Soleil's Michael Jackson Immortal Tour. It's very challenging but I can't help but smile when The music comes on. We both thoroughly enjoy skating to it. You know it's the right piece when it gets you inside. 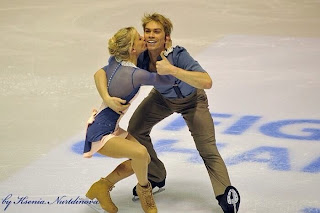 Q: When it comes to technique, what do you believe is the most improved area of your skating since last season's competitions?

A from Nick: I think we have worked on and improved our “overall package” since last season. I feel we have improved in lots of different areas making us a stronger team overall. We’ve strengthened our weaknesses and taken advantage of our strengths! We’ve put everything into this seasons programs that we strongly believe are our best so far.

Q: When you're not on the ice, how do you both enjoy spending your free time?

A from Penny: I really enjoy cooking and baking. I also Skype with my family and friends back home.

A from Nick: To relax, I like to play golf and also play video games with my brother!

Q: What ice dancing teams (of all time) do you most look up to?

A from Penny: There have been so many great teams! I believe you can learn something from everyone. But, I most look up to Torvill and Dean, Platov and Grishuk, Davis and White and Virtue and Moir.


Q: What are your ultimate goals looking towards Europeans, Sochi and Worlds?

A from Penny: This season is important for everyone. Nick and I hope to have great preparations leading to each competition this season. We don't like to think about placements; we think that if your prepare right and skate as you do in practice the results will take care of themselves. As always we are looking to improve our skating skills and share performances the audience will enjoy.

Q: You have skated to everything from Jennifer Lopez to Basement Jaxx to The Lion King and Riverdance in the last few seasons. Why is it important to keep your programs fresh, edgy and innovative and what can you reveal about your new programs for the 2013/2014 season?

A from Penny: Thank you! Nick and I always take time when we are selecting our music for the season. To us, it's one of the most important times! We try to choose something that the audience knows and likes but to put our own spin on it. I spoke before about our Michael Jackson free dance. We choose to use the Cirque music as its composed little differently. We love it. Our short this year is to Fred Astaire's "I won't dance" but again, we managed to find a version from "Step Up 3" which is a little different and more current. We also chose to mix this with a Swing by an alternative hip hop group Jurassic Five. We hope to offer something traditional with a twist.


Q: You are coached by 2 time Olympic Gold Medallist and skating legend Evgeny Platov. What is Evgeny like off the ice, what is his coaching style like and why is he the best coach for you?

A from Nick: Evgeny is a very understanding coach. He knows when to push you and he knows when you need a rest. He is very good at structuring the preparation to a competition and above all he is a master at teaching skating technique. We have learnt so much from him from all of his experiences and they are invaluable when applying them to our own skating careers. It puts his heart and soul into teaching us and we feel because of this we get so much from him that we doubt we could get from anybody else.

Q: If you were going on a month long trip and could only pack three things, what would they be?

A from Penny: Tea bags! I love tea. My iPad, so I can keep in touch with my family. And Nick. 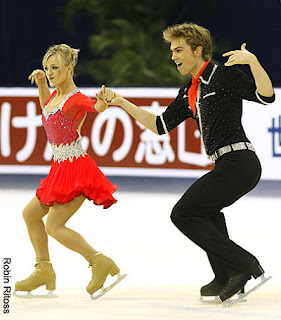 A from Penny: I am lucky enough to travel the World and do what I love every day, but my favourite part is the feeling I get when I'm exhausted at the end of the day when I know I've worked hard. The feeling you get after all the runthroughs, when the lift you've been working on for weeks finally works, and after I finish skating at a competition. It's the best feeling in the world.

A from Nick: I love skating because it provides me with a freedom you cant get from anything else. When I’m on the ice I forget about everything and focus only on what I’m doing. Its real escapism and because of that I think I will always be part ice skating in some shape or form.

If you enjoyed the interview with Penny and Nick, stay tuned to http://www.facebook.com/SkateGuard and http://skateguard1.blogspot.ca for more skater interviews as well as articles, skating history, commentary and special features! You can also follow me on the Twitter at http://twitter.com/SkateGuardBlog for skating tweets and whatever else I've got on the go. It would be rude not to, now wouldn't it honey?
Posted by Skate Guard Blog at August 04, 2013
Email ThisBlogThis!Share to TwitterShare to FacebookShare to Pinterest
Newer Post Older Post Home