Skating Around The Christmas Tree: Happy Holidays On Ice! 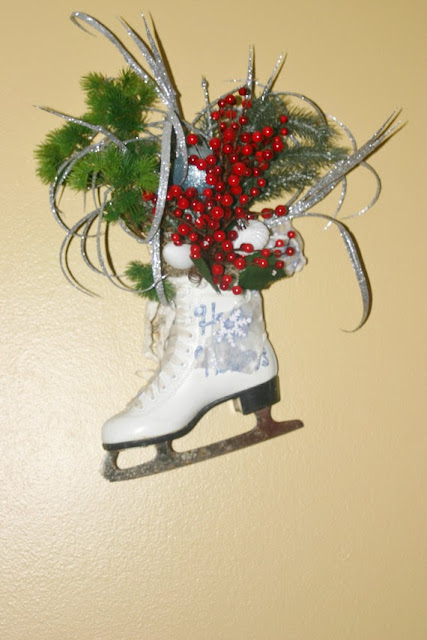 What better way to spend the season than to revisit some of skating's best holiday themed performances! Pour yourself a glass of apple cider, gather around the computer and tell that Grinch to back off and cook his own roast beast, it's time for some holiday skating...


At the 1989 World Professional Figure Skating Championships in Landover, Maryland, Rosalynn Sumners turned in a beautiful artistic program to Irving Berlin's rendition of the Christmas classic "White Christmas". Complete with a one foot axel, double toe-loop, Ina Bauer into double flip, a massive double Axel, a double loop and elegant spirals, spins and connecting moves, this program, its costuming and choreography harkened to an earlier time and had such a timeless, gorgeous quality about it.

In a program that illustrated the dance of The Sugar Plum Fairy and The Prince in the Christmas classic "The Nutcracker", two time Olympic Gold Medallists Ekaterina Gordeeva and Sergei Grinkov were in their element and exquisitely so in this performance to Tchaikovsky's "Pas De Deux" from the 1992 Disney Christmas On Ice special. I've always thought Katia and Sergei were honestly one of the absolute best pairs teams of all time because they made you forget just how technically strong they were and made everything look so effortless all you ever focused on was the performance itself... and this lovely performance was no exception.

With this tongue in cheek Christmas classic set to the music of the inimitable, late Eartha Kitt (whose autobiography "I'm Still Here" is a must read, by the way), Olympic and World Champions Jamie Sale and David Pelletier are at their very best. I've probably seen dozens of skaters interpret this music in made for TV holiday specials over the years, but this interpretation from the 2004 Holiday Festival On Ice has to be my favourite. David in the Santa suit is precious, and Jamie is radiant as always.


Paul Wylie's fiery and passionate interpretation of the holiday classic "O Holy Night" has got to be one of the prettiest holiday skating programs out there. Paul's always dramatic and theatrical style was very well suited to this music choice, and he really gave this program an extra touch of feeling. A pleasure to watch!


When you combine the music of Mannheim Steamroller and the skating of 1976 Olympic Gold Medallist Dorothy Hamill, how can you not have magic? But as magical as the pairing sounds on paper, this performance from "The Christmas Angel" transcends any expectations. The held edges, the glide, the importance of each connection and turn... Dorothy's skating is and always has been in a class by itself and this pairing couldn't be any better suited if it tried.

Skate Guard is a blog dedicated to preserving the rich, colourful and fascinating history of figure skating and archives hundreds of compelling features and interviews in a searchable format for readers worldwide. Though there never has been nor will there be a charge for access to these resources, you taking the time to 'like' on the blog's Facebook page at http://www.facebook.com/SkateGuard would be so very much appreciated. Already 'liking'? Consider sharing this feature for others via social media. It would make all the difference in the blog reaching a wider audience. Have a question or comment regarding anything you have read here or have a suggestion for a topic related to figure skating history you would like to see covered? I'd love to hear from you! Learn the many ways you can reach out at http://skateguard1.blogspot.ca/p/contact.html.
Posted by Skate Guard Blog at December 03, 2013
Email ThisBlogThis!Share to TwitterShare to FacebookShare to Pinterest
Newer Post Older Post Home
"As a rule an author has one or two popular ways of contrasting the past with the present. He can treat the past as lying in comparative doleful ignorance, or he can explain that the past was infinitely superior to the day we live in. Of course, either method is the popular journalism of the moment, and in reality there is no sharp contrast, but a gradual transition which leads the past into the present." - Joel B. Liberman, Skating Club Of New York