Twas The Night Before Sochi 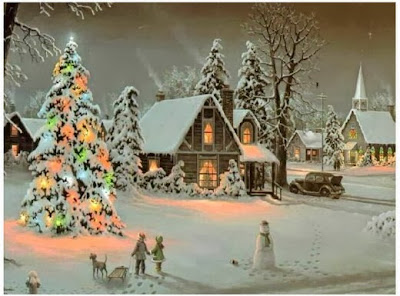 Clement Clarke Moore's "A Visit From St. Nicholas" (widely known as "Twas The Night Before Christmas") is the stuff Christmas dreams are made of, a beloved holiday poem that transcends culture and language. Speaking of beloved, there's absolutely nothing any proper person loves more than a little skating in their life and few people in the skating world as iconic and beloved than 2 time Olympic Gold Medallist and skating legend Dick Button, whose book "Push Dick's Button" is out now (buy it on Amazon here). So, in keeping with the 'festive season' and the upcoming Olympics in Sochi, Russia, here's my holiday take on a Christmas classic, complete with a little St. Dick:

Twas the night before Sochi and all through the rink
Not a skater was lutzing, or flutzing I think
Trankov's yellow pants were hung in the dressing room with care,
In hopes that Dick Button soon would be there.

The judges were nestled all snug in their beds,
While visions of edge calls danced in their heads
Ashley Wagner in pink and Jeremy Abbott in black
Had both settled in for a long winter's nap.

When in the Athlete's Village there arose such a clatter,
the skaters sprang from their beds to see what was the matter.
Away to the windows they flew in a pack,
To see if St. Dick had arrived with his sack.

The moon on the breast of the cold Russian snow
Gave the lustre of mid-day to the Village below.
When, what to their wondering eyes should appear,
But a miniature sleigh, and eight skate-clad reindeer.

With a jolly driver, so lively and quick,
In a minute they knew it must be St. Dick!
More rapid than spread eagles his coursers they came,
And he whistled, and shouted, and called them by name!

As so the sleigh landed and he looked around
And let his sack of presents fall down to the ground.
"Let's get down to business," St. Dick exclaimed.
"We won't be having any tomfoolery or reindeer games!"

"Make those layback spins first rate and those landings tight!
I don't give a rusty hoot what they say, you must do it right!
Keep your back straight, and gosh sakes, hold that edge!
Get your hair cut - get the Dorothy Hamill wedge!

Don't make those referees blow on their whistles!
You better be sure that you nail those twizzles!
There needs to a little more swan in that Swan Lake
Extend that free leg and don't let it shake!

If that doesn't put a fanizzle in their shanizzle nothing else will!
Show them your best! Show them your skill!
Bamboozle them with your feet and not with your hands!
Then they'll be cheering all through the stands!

For you fine young ladies and you fine young men,
all deserve a level ten!"
One skater shouted "but it only goes to five!"
St. Dick laughed and let out a sigh.

"The biggest gift that you can give them is your best skate.
Just do your best and make it first rate!
There's no time for sleep, get on that ice quick!
Practice all night! And watch that toe pick!"

He sprang to his sleigh, to his team gave a whistle,
And away they all flew like the down of a thistle.
But they heard him exclaim, ‘ere he drove out of sight,
"Gold medals for all, and to all a good night!"

Was this your cup of tea? Well, don't just stand there! In order for this blog to reach a wider audience, I could sure use a little help. All you have to do is "LIKE" the blog's Facebook page at http://www.facebook.com/SkateGuard for instant access to all of the new blog articles, features and interviews as they are made available. I also share daily updates and headlines from the skating world, videos and much more that's not here on the blog, so if you love figure skating as much I do, it would really be rude not to get on that inside edge! You can also follow all of the fun along on Twitter at http://twitter.com/SkateGuardBlog. If you know someone who loves skating, tell them! It's all about getting a dialogue going on! Fabulous skating is too fabulous to keep secret. Am I right or am I right?
Posted by Skate Guard Blog at December 22, 2013
Email ThisBlogThis!Share to TwitterShare to FacebookShare to Pinterest
Newer Post Older Post Home
"As a rule an author has one or two popular ways of contrasting the past with the present. He can treat the past as lying in comparative doleful ignorance, or he can explain that the past was infinitely superior to the day we live in. Of course, either method is the popular journalism of the moment, and in reality there is no sharp contrast, but a gradual transition which leads the past into the present." - Joel B. Liberman, Skating Club Of New York