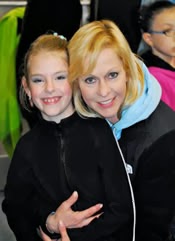 A: Probably the 1992 USSR Nationals. Denis and I won... finally, and it was last in history USSR Nationals because after that there was no more USSR. The Olympics... big time! I managed my nerves and did my best! Also, the 1996 World Professional Championships... we won and we did perfect!

Q: You toured with Stars On Ice for seven years. What did you enjoy most and learn most from your time on tour?

A: I loved every minute of my seven years with Stars On Ice. I learned how to be your best every show and how to share your talent with spectators. I learned and improved my English. I loved traveling on a private jets, going to beautiful American cities and traveling with the best skaters in the world.

Q: Before skating with Denis Petrov, you were won Skate Canada and a medal at the 1986 World Championships with your first partner Valery Kornienko, who was twenty years your senior. What were the high and low points of this partnership and what brought you to Denis Petrov? How did your coach Tamara Moskvina become involved in the process?

A: I always was with Tamara Moskvina. She coached me with Valery too. We were 1986 European Bronze Medalists and traveled a bit within the former USSR. When Valery decided to stop skating, Tamara advised me to try Denis as a skating partner. She knew what she was talking about!

Q: You competed at a time in Soviet pairs skating when you were up against SO many great teams at home, Gordeeva and Grinkov, Mishkutenok and Dmitriev, Shishkova and Naumov and Eltsova and Bushkov among them. How much pressure was there in competition at the Soviet Nationals and what did you learn from your competitors that improved your own skating?

A: There was SO much pressure that at times I did not want to compete. I always wanted to do my best but because of my nerves I had a few very rough events. I learned a lot from Gordeeva and Grinkov. They were my idols. I could watch them skate every day. I also learned how to be tough and positive when things are not that easy. Competing against great skaters helped me to become a stronger person.

Q: You and Denis married in 1990 and divorced in 1995. How challenging was balancing your personal relationship with Denis while still skating together every day on the ice?

A: It was not that hard. We were great friends but were just too young to take care of each other's emotional needs.

Q: Do you and Denis still speak and would you ever consider skating together again?

A: We do not stay in touch and I'm not sure why. He is in China and I am in the U.S. I wish I could talk to him and just see how he is doing. There is no skating together in the near future.

Q: On your father's side of your family, you are of Hungarian heritage. Have you visited Hungary and what cultural traditions from Hungary and Russia do you celebrate in your life today?

A: I have never been there. The only Hungarian items I know these days are my last name and some great dishes my Mom cooks. My dad passed away in 1993.

Q: You have had so many fabulous programs over the years - "You Don't Bring Me Flowers", "The Young Lady And The Hooligan", "Whole Lotta Love" and "Blue Danube" among them. What were your favourite programs to skate and what is one piece of music you would love to skate to even now?

A: "Flowers" for sure. One of the best ever. The "Hungarian Dance" of 1999/2000 was just perfect. "Creation of the World" was simply unbelievable. I can watch those programs every day and still feel proud of Denis and I and all our coaches and choreographers.

Q:  What is your favourite movie, song and book?

A: Sleepless in Seattle and Nicholas Sparks books. He is from North Carolina as well. I love Tolstoy and Dostoyevsky. My favourite song is "Just The Way You Are" by Bruno Mars.

A: Kristi Yamaguchi. She was the most disciplined athlete in the world. Paul Wylie. The most passionate skater of all times. Scott Hamilton. The most creative and engaging skater and person I have ever met.

Q: You remarried in 2001 and now are a mother of two and a skating coach in North Carolina. How has life changed for you since your skating career ended and what do you consider most important in life now?

A: My kids Alex and Sophia are my world and my happiness. My family is the most important part of my life.

Q: If you could tell one person struggling with their confidence on the ice something, what would it be?

If you enjoyed the interview with Elena, like the blog on Facebook http://www.facebook.com/SkateGuard and read along at http://skateguard1.blogspot.ca for more skater interviews as well as articles, skating history, commentary and special features! You can also follow me on the Twitter at http://twitter.com/SkateGuardBlog for skating tweets and whatever else I've got on the go. It would be rude not to, now wouldn't it honey?
Posted by Skate Guard Blog at May 22, 2014
Email ThisBlogThis!Share to TwitterShare to FacebookShare to Pinterest
Newer Post Older Post Home