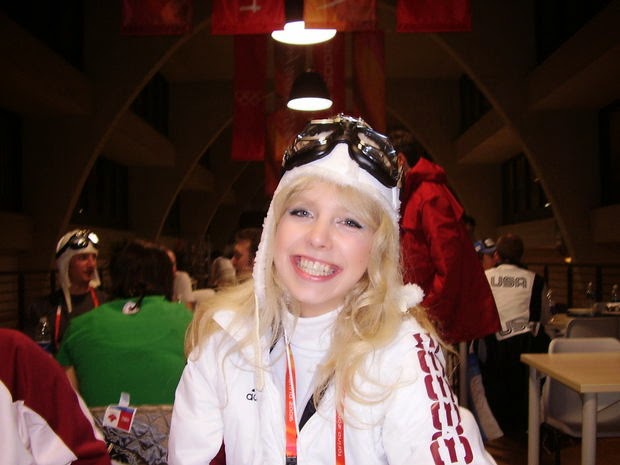 After making her first of four consecutive trips to the World Junior Championships in 2001, Hungarian Champion Viktória Pavuk embarked on a competitive figure skating career that would see her spend a decade competing in senior competitions around the world. In 2004, she narrowly missed the podium at the European Championships in her home country and handily beat eventual Olympic Bronze Medallist Carolina Kostner and European Champion Sarah Meier in the process. After a four year absence from the World Championships, the athletic Viktória returned in 2011 and again qualified for the free skate. It was my pleasure to talk to her about life after retiring from competition in 2012, her competitive career, her favourite skaters and much more in this lovely interview: 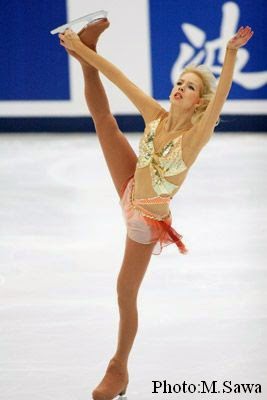 Q: Your competitive career spanned more than decade and saw you win the Hungarian national title, compete at four European Championships and World Championships, represent your country in the 2006 Winter Olympic Games in Torino, Italy and win important international competitions such as the Ondrej Nepela Memorial, Coupe de Nice and Skate Israel. Reflecting on your entire time as a competitive skater, what memories stand out as your proudest or the most special? Contrary wise, which were the most challenging?

A: I have uncountable wonderful memories and find it very difficult to name just one that stands out the most but besides the ones you mentioned (especially the Olympic Games) I am very proud of my Junior Grand Prix gold medal. It was an amazing and special experience in Gdansk being the last to skate in the Gala and my coach Szabolcs Vidrai fondly calling me "my champion lady". It was very important to win here, because it was for the entry of the Grand Prix Final, where I finished at in the third place. I am also proud of my short program bronze medal from the European Championships. I could travel around the world by skating. It's true I could not get every time into the city center, for example to the Eiffel Tower because of the strict schedule. Sometimes we had just some days which are spent with competition but I could walk on the Big Wall. The most challenging competition was the Olympic Games. It was unforgettable memory skating in front of nine and a half thousand spectators during the European Championships in Budapest Arena and in 2004 I was able to take part in the Gala because of my result and not because I am Hungarian. French competitions are close to my heart and I feel French spectators like me as well. Every time I took part in Cup of Nice, I was published with more pictures in their brochure and they exposed them on the ice rink wall. 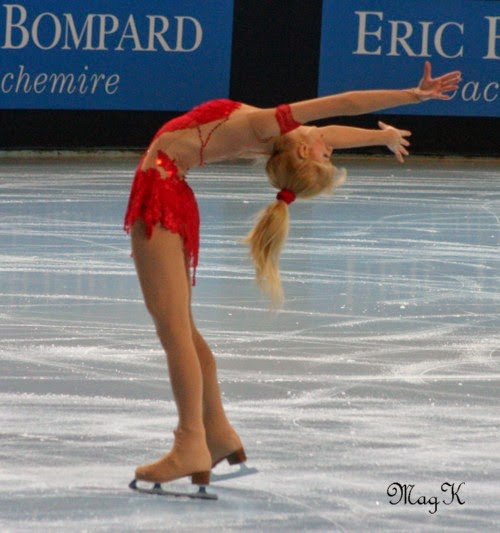 Q: During your skating career, your sister Patricia (a competitive ice dancer) was one of your coaches alongside Szabolcs Vidrai and Istvan Simon. What made your relationship with your coaches work?

A: I reached third place in the Junior Olympic Games with my first coach István Simon. I got good basic training from him and from my first ballet teacher Judit Puskás. I did major expansion during the period of time spent with Szabolcs. At that time, I got to work with Igor Tchiniaev who taught me new skating styles and I was opened to change. I got my best results during these three years in junior and senior category as well. I got to go to Eric Bompard, the Paris Grand Prix and finished seventh place and won two times at the Cup of Nice with Patricia.

Q: Your decision to end your career came in 2012. How did you reach this difficult decision and do you have any regrets about not continuing until 2014?

A: Dancing and skating was my love and I was very dedicated, so I wanted to continue competing. Unfortunately, conditions did not allow me to continue skating. I think almost every professional skater or other athlete's hearts stay half out on the ice or on a court. I grow up on the dancing floor and on the ice and I started skating and doing classical and jazz ballet at the same time when I was three so it is hard to break away. 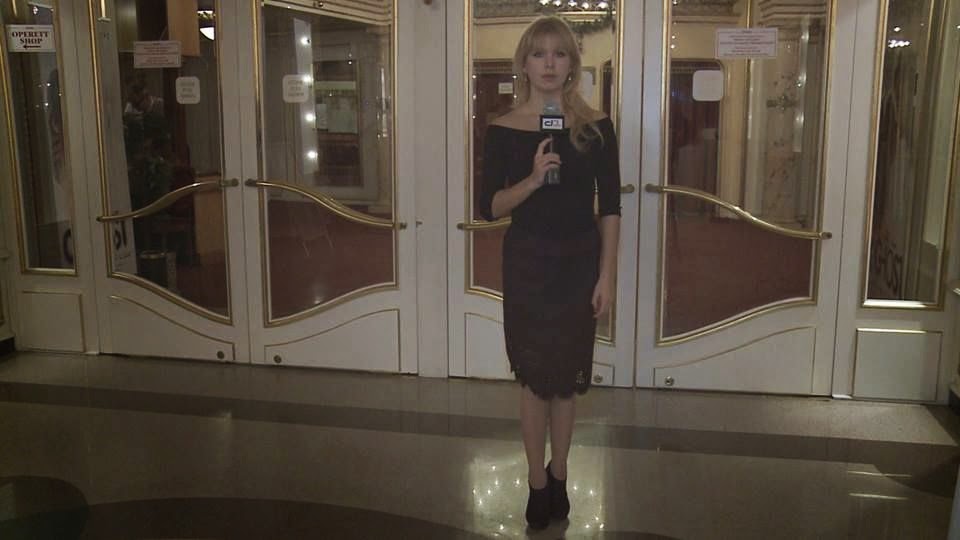 Q: Since retiring from competitive skating, what is your involvement with skating in Hungary and what are your goals in life off of the ice?

A: I wanted to attend the Dance Academy but I couldn't have the time for it because of professional figure skating so I finished my studies and got a diploma of physical education and I made a media school as well. I have worked as a reporter at a Cultur Television for two years. I like this new profession. I mostly do interviews with actors and dancers and I can see their performances at the National Dancetheater and Operetta Theater. Sometimes I hold practices for small skaters. Children and I both seem to like each other. I miss skating so I am thinking about doing a revue and then after staying abroad to continue my life as a coach. However, I am starting get used to and love my work as a reporter. It's a difficult decision!


A: Of course I recognize the results of Krisztina Czakó and Diana Póth. I got motivation from Maria Butyrskaya, Oksana Baiul and Shizuka Arakawa. I think they really loved skating and it showed during their performances. They are my favourite skaters from all time.


Q: Having competed under both systems,  what are thoughts on the current skate of figure skating and the new judging system? Do you feel it has bettered the sport or do you prefer the 6.0 system?

A: In my point of view, it was not a big change. I could conform to the new judging system. I can do difficult variations and change of edges and difficult positions in spins like the Biellmann, split and donut spin. The scoring of the sport will always be subjective. Anyway, there are some funny situations when skaters laugh at the judging requirements... In one season, they asked for changes in speed during the step sequence and Alban Préaubert started to walk on his top of the blades and then started to run. It made for a funny performance and I liked it. 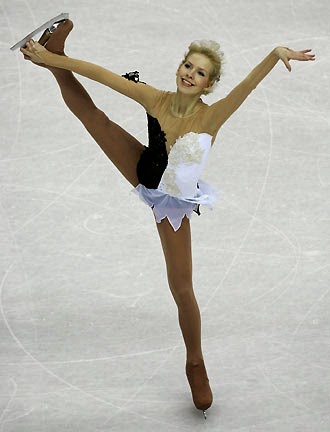 Q: What were your thoughts on the ladies competitions at the 2014 Winter Olympics and 2014 World Championships?

A: Frankly, I was not able to watch a lot of the competitions for the last two years because my heart broke after finishing competing. What I have seen is that figure skating is more technical then ever and lost from its artistic nature. On the other hand, figure skating is sport and the exhibitions and revues are where we have to go to show our acting abilities.

Q: What’s one thing most people don’t know about you?

A: Well, maybe not all people know that I was an almost fanatic hard worker on the ice. I wanted to meet the expectations and prove myself to my beloved fans and of course little skaters, because they gave me energy and had fun. I still start almost every morning start with ballet lessons and nowadays go on the ice so I am ready for exhibition skating. I also like romantic novels. My favourite is "Gone With The Wind". I love this one and the music from the movie as well.

Did you enjoy this interview with Viktória? In order for this blog to reach a wider audience, I could sure use a little help. All you have to do is "LIKE" the blog's Facebook page at http://www.facebook.com/SkateGuard for instant access to all of the new blog articles, features and interviews as they are made available. I also share daily updates and headlines from the skating world, videos and much more that's not here on the blog, so if you love figure skating as much I do, it would really be rude not to get on that inside edge! You can also follow all of the fun along on Twitter at http://twitter.com/SkateGuardBlog. If you know someone who loves skating, tell them! It's all about getting a dialogue going on! Fabulous skating is too fabulous to keep secret. Am I right or am I right?
Posted by Skate Guard Blog at August 05, 2014
Email ThisBlogThis!Share to TwitterShare to FacebookShare to Pinterest
Newer Post Older Post Home