Czech This Out: A Look At Early Czechoslovakian Skating History 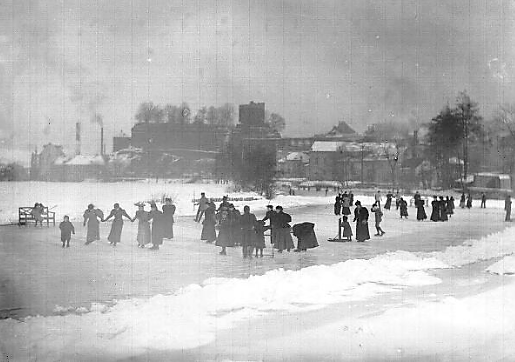 "At noon today I was on the ice, alone. The river was frozen and I went skating on it. The ice was like a mirror, the sun warm. The frost sparkled on the trees, and I, completely alone in this... white world. What sweet, quiet loneliness! Not to be mirrored in anyone... What freedom! Sliding on the ice limited only by the rhythm of my own breath. Thus I would wish to glide through life, carried along by the current of public life, in harmony with it, free and yet part of the whole." - Gisa Picková–Saudková, 1905

During author Gisa Picková–Saudková's time, the country that would later be known as Czechoslovakia was actually part of the Austro-Hungarian Empire. In 1993, Czechoslovakia peacefully dissolved into two countries, the Czech Republic and Slovakia. Yet, borders and politics aside, from Prague to Košice; Bratislava to Brno, skating has united the Czech and Slovakian people for a very, very long time.

In 1845, Frau Henriette Wach von Paalzow referred to the popularity of ice skating in Prague during the winters in her book "The Citizen Of Prague" and less than ten years later in 1854, in "The London Literary Gazette and Journal of Belles Lettres", British traveller Ferdinand St. John recounted Bohemian aristrocrats ice skating at a chateau near Prague during that era: "I had received a large card of invitation, handsomely ornamented with sporting vignettes, announcing six grand days in honour of three young Archdukes who happened to be in that part of the country. The company were particularly requested to arrive on the previous day. I was the first to make my appearance, and found the general skating on a piece of water in the garden. On my approach he came gliding towards me; but whilst intent upon grasping my hand his heels slipped up, and down he fell sprawling on his back. At that same moment we heard the clang of postilion horns, and the General, kicking off his skates, hastened to receive the Archdukes and their retinue."

Speed and figure skating alike enjoyed popularity in the late nineteenth century in the region, with the first organized skating club in Bratislava popping up in 1871. The following January, J. Frank, Vice-President of said club, represented Bratislava in an early figure skating competition in Vienna, Austria. The February 1, 2001 edition of Blades On Ice magazine even purports that "Franz Lehar, the king of Waltz, conducted a band for a skating evening on a frozen lake in a cave near Bratislava under 64 gas lights."

In January 1908, the World Figure Skating Championships for men and women were held in Troppau, Austria-Hungary (modern day Opava, Czech Republic) but it wasn't until 1925 when Czechoslovakia was first officially represented at the World Championships by men's skater Josef Sliva and pairs team Eliška and Oscar Hoppe. Sliva, who narrowly missed out on the bronze medal at the 1924 Winter Olympics in Chamonix, France, would prove to be one of the earliest success stories in Czechoslovakian skating but it would be the Hoppe's that would win the country's first international medal in figure skating at the 1927 World Championships in Vienna. In 1934 and 1937, Prague played host to the European Championships and although Vera Hrubá Ralston, profiled on the blog in 2014, would enjoy success in America, it wasn't until the 1948 European Championships in Prague and Ája Vrzáňová's World title win the following year that skaters from Czechoslovakia really started making the world take notice.


The 1958 European Championships in Bratislava were actually the first to be broadcast live on television and the fact that hometown favourite and school figures specialist Karol Divin claimed the men's title really helped generate interest in the sport in Czechoslovakia and paved the way for the next generation of Czech and Slovakian skaters. When we think Czechoslovakia and skating history, our minds immediately turn to the Sabena Crash and the cancelled 1961 World Championships, to Ondrej Nepela, Jozef Sabovcik and Petr Barna, but the reality is that the story extended back so much further. It's only in the dusting off of those history books that these early footnotes get the audience they richly deserve.

Skate Guard is a blog dedicated to preserving the rich, colourful and fascinating history of figure skating and archives hundreds of compelling features and interviews in a searchable format for readers worldwide. Though there never has been nor will there be a charge for access to these resources, you taking the time to 'like' on the blog's Facebook page at http://www.facebook.com/SkateGuard would be so very much appreciated. Already 'liking'? Consider sharing this feature for others via social media. It would make all the difference in the blog reaching a wider audience. Have a question or comment regarding anything you have read here or have a suggestion for a topic related to figure skating history you would like to see covered? I'd love to hear from you! Learn the many ways you can reach out at http://skateguard1.blogspot.ca/p/contact.html.
Posted by Skate Guard Blog at August 16, 2016
Email ThisBlogThis!Share to TwitterShare to FacebookShare to Pinterest
Newer Post Older Post Home