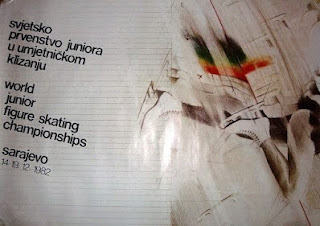 From December 14 to 17, 1982, The 1983 World Junior Figure Skating Championships were held in an ice rink was later badly damaged in a country that no longer exists. The venue was the Zetra Ice Rink; the city Sarajevo, Yugoslavia. The competition was held in the Eastern European city as the first test run for the 1984 Winter Olympic Games and skaters from twenty four nations and four continents were in attendance. Although Sarajevo was surrounded by mountains, thick industrial smog permeated the damp, rainy air. It was hardly an idyllic backdrop for dozens of enthusiastic young figure skaters looking to make their mark on the world, but somehow they managed. Let's take a look back at this interesting competition! 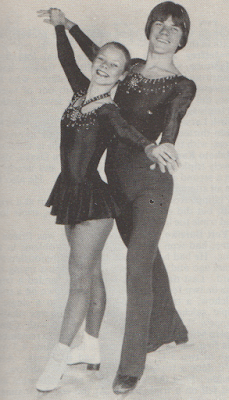 Soviet ice dancers Tatiana Gladkova and Igor Shpilband (name ring a bell?) were silver medallists at the World Junior Championships the previous autumn in Oberstdorf, West Germany. They moved up a notch to claim the gold in Sarajevo over teammates Elena Novikova and Oleg Bliakhman, leading the event from start to finish and earning high marks for their spirited free dance to "Fiddler On The Roof". American siblings Cissy (Christina) and Keith Yatsuhashi finished seventh in the compulsory dances but moved up to fourth with strong performances in the OSP and free dance. The bronze medallists, Christine Chiniard and Martial Mette, were later disqualified in the ISU's first case of a failed doping test in ice dance competition. The culprit? Diet pills. The Yatsuhashi's didn't even learn they'd been elevated to the bronze medal until long after they had left Sarajevo. A club member happened to read the ISU's bulletin and passed on the good news. Canadians Christine Horton and Michael Farrington and Jo-Anne Borlase and Scott Chalmers finished fifth and sixth. Future four time Italian Champions Stefania Calegari and Pasquale Camerlengo finished ninth, ahead of teams from Hungary, France, Great Britain, Poland, Sweden and Luxembourg. Gladkova and Shpilband's victory was the sixth consecutive win by a Soviet ice dance team at the World Junior Championships.

The pairs short program was by all accounts a bit of a hot mess. Soviet teams Inna Bekker and Sergei Likhanski and Marina Avstryskaya and Yuri Kvashnin led the way, but both Sergei and Yuri managed to trip during the required circular step sequences, incurring mandatory 0.2 judges from the judges. East Germans Peggy Seidel and Ralf Seifert, also got dinged on the step sequence for lack of unison. A miss on the side-by-side double loops kept them in third. Considering the issues of the top three pairs, we can only imagine how the other six pairs competing fared! Unfortunately, the free skate was even worse. Avstryskaya and Kvashnin won with falls on the throw triple Salchow, misses on both side-by-side jumps and poor leg extension in their lifts. Seidel and Seifert moved up to second, opening their four minute free skate with a triple twist but falling on a rare throw triple toe-loop attempt. Short program leaders Bekker and Likhanski dropped to third with a botched triple twist attempt, misses on both side-by-side jumping passes, a touchdown on a throw and flying camel spins that were completely out of unison. Despite the fact the pairs event was a bit of a splatfest to say the least, there were some names you might recognize further down in the standings! Ingo Steuer, competing with then-partner Manuela Landgraf, finished fourth. Jason Dungjen finished sixth with his sister Susan and in seventh were another sibling pair, well-known Australians Danielle and Stephen Carr. Canada didn't have a team in the pairs event that year, as 1982 Canadian Novice Champions Christine Hough and Kevin Wheeler withdrew the day before they were to depart due to Christine's tendonitis. 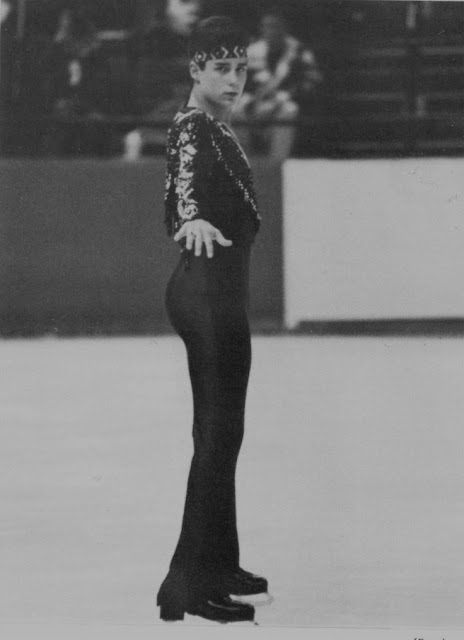 Following in the footsteps of Americans Paul Wylie and Scott Williams who had been World Junior Champions the past two years, fifteen year old Frank Carroll student Christopher Bowman of Los Angeles, California took an early lead in the school figures. He dropped to third with his "Victor/Victoria" short program, where he fell on a flying sit spin and won the free skate with a clean triple loop, Salchow and toe-loop to make it a three-peat for American men at the event in Sarajevo. Fifth in figures, France's Philippe Roncoli skated well in both the short program and free skate to claim the silver. Bolstered by a second place finish in the figures, East Germany's Nils Köpp held on to claim the bronze in a close battle with Beauport, Quebec's Marc Ferland, though neither finished in the top three in either the short program or free skate. By all accounts, Ferland really got gypped at this event. He was third in figures, skated a clean short program with a triple/double combination and landed three triples in a free skate chock full of well-executed spins and footwork. Köpp's free skate, in contrast, was chock full of mistakes. Unfortunately, as was the case at many events back in the day, the ordinals were all over the place. The short program was actually won by the Soviet Union's Yuri Kureiko, but a disastrous free skate kept him in sixth. Hampered by an unlucky thirteenth place finish in the school figures, America's second entry Erik Larson was only able to move up to seventh despite technically difficult and well-executed efforts in the short program and free skate. A second Canadian, Jeff Partrick - who was one of the youngest competitors in the event - placed sixteenth of the nineteen men competing, with mistakes on two of his jumping passes in the short program dropping him down from a twelfth place result in the figures. 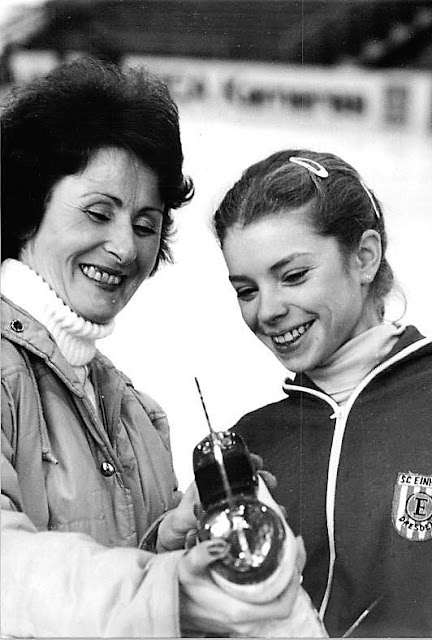 Twenty two women from twenty nations competed in the women's event in Sarajevo. It would have been an even twenty four, but West German Heike Gobbers and America's only entry, Lorilee Pritchard, both withdrew prior to the figures due to injury. The second American women's entry, Staci McMullin, was cut from the event during the draw due to an ISU rule specifying that if there were more than twenty four entries, skater(s) whose names weren't drawn would be cut. She wasn't allowed to be substituted for either of the skaters whose names were pulled but withdrew. To add to the confusion, organizers let her attend official practices after the draw. The situation was a mess that certainly caused hurt feelings.

Leading the way in the first phase of the event was Austria's Parthena Sarafidis, followed by East Germans Simone Koch and Karin Hendschke. Koch skated a clean short program with a triple toe-loop/double toe-loop combination and an artistic yet difficult free skate to coast to the gold medal ahead of Hendschke and Sarafidis. Georgian Nelli Dvalishvili, representing the Soviet Union, was a solid fourth but it was actually a young Japanese skater named Sachie Yuki who was the toast of the competition. A disastrous fourteenth in figures, Yuki placed second to Koch in both the short program and free skate. She even landed a difficult double toe-loop/triple toe-loop combination in her short program that certainly got everyone's attention! 1982 Canadian Junior Champion Monica Lipson landed her first triple Salchow in competition to finish an impressive fifth, while her teammate Melissa Murphy, the 1982 Canadian Novice Champion, placed a strong seventh despite incurring 0.7 in deductions in the short program after a botched jump combination. Skating in her home country and finishing twelfth was Željka Čižmešija, who would later go down in history as the last person to skate a school figure at the World Championships in Halifax, Nova Scotia in 1990.

In "Skating Around The World 1892-1992: The One Hundredth Anniversary History Of The International Skating Union", ISU historian Benjamin T. Wright noted, "An incident occurred in the Ladies event, which resulted in a subsequent rule change. Two competitors were injured after the draw and before the start of the competition, making the total number of entries twenty-two, which was two less than the maximum permitted. Although the announced alternate for one of the injured skaters was present and ready to skate, she was not permitted to do so under the prevailing rule prohibiting any substitutions after the draw. The rule was subsequently changed to permit a substitution before the start of the competition in the case of a withdrawal due to injury or illness." 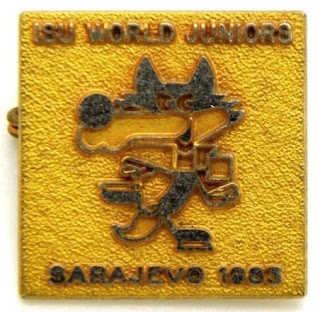 In the February/March 1983 issue of the "Canadian Skater" magazine, men's competitor Marc Ferland recalled, "On the last day, each skater was honoured with an official competition pin and souvenir certificate, both very lovely gifts and souvenirs. That evening, the closing banquet was held. There was much exchanging of gifts, photos and autographs. The evening ended with music and dancing. At six o'clock the next morning, we boarded the bus for the airport, and then the long journey began. Everyone was tired and anxious to arrive home, but we had not forgotten the good times we had. Sarajevo will always be in our memories."

Skate Guard is a blog dedicated to preserving the rich, colourful and fascinating history of figure skating and archives hundreds of compelling features and interviews in a searchable format for readers worldwide. Though there never has been nor will there be a charge for access to these resources, you taking the time to 'like' on the blog's Facebook page at http://www.facebook.com/SkateGuard would be so very much appreciated. Already 'liking'? Consider sharing this feature for others via social media. It would make all the difference in the blog reaching a wider audience. Have a question or comment regarding anything you have read here or have a suggestion for a topic related to figure skating history you would like to see covered? I'd love to hear from you! Learn the many ways you can reach out at http://skateguard1.blogspot.ca/p/contact.html.
Posted by Skate Guard Blog at March 05, 2018
Email ThisBlogThis!Share to TwitterShare to FacebookShare to Pinterest
Newer Post Older Post Home