The Whole Kit And Kaboodle 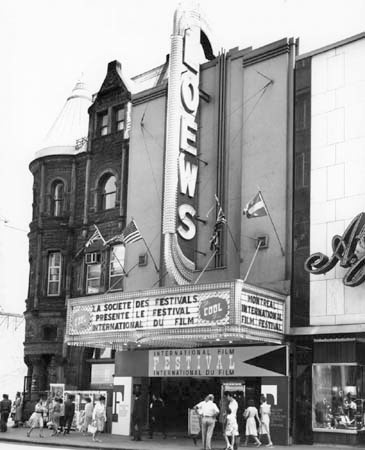 An unlikely mecca for Vaudeville shows in the thirties, Montreal's Loew's Theatre (built in 1917) was notorious for its blackface minstrel shows and tramp comedians. In 1931, its star attraction was a pair of conjoined 'Siamese twins' from the Philippines named Lucio and Simplicio Godina who sang, danced and roller skated for gawking curiosity seekers. Seven years later, the venue played host to an equally unusual attraction - an ice show.

Manager Howard Knevels brought in a revue called The St. Moritz Ice-Skating Carnival over the holiday season in 1937. It opened on New Year's Eve and enjoyed a short run with a cast of twenty five skaters. A 'glittering' set painted with Swiss mountain slopes and trees played backdrop to a tiny stage of artificial ice. Three opening acts - impersonator Beatrice Howell, banjo player and MC Ken Harvey and a team of 'comic tumblers' - preceded the ice show, which "The Canadian Jewish Chronicle" described as "a rapid fire production... that is undoubtedly the most spectacular, novel and entertaining ever offered in any theatre in this city." 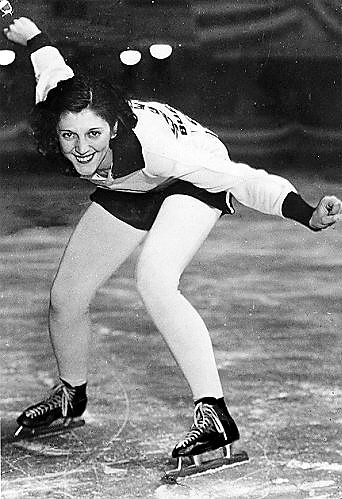 Interestingly, the star wasn't even a figure skater. An American speed skater named Kit Klein who had won the Olympic gold medal in the fifteen hundred meter race at the 1932 Winter Olympics in Lake Placid and gone on to do advertisements for Camel cigarettes had top billing. She was supported by barrel jumper Bobby Hurd, ice dancers Irene and Dick Meister, a sister act, a chorus of twelve 'beautiful ice skating maidens' and an ice comedian from Nova Scotia named Douglas Duffy. The highlight of the show? A matador act with a two man skating bull.

The Ice Follies, Ice Capades and Sonja Henie's Hollywood Ice Revue all made stops in Montreal in the years that followed but the interest generated by The St. Moritz Ice-Skating Carnival at Loew's never ultimately translated to a static series of Vaudeville style ice shows in Montreal. Only three years after the The St. Moritz Ice-Skating Carnival, Loew's Theatre was converted to a film cinema. It remained in operation through the nineties until being partially demolished and transformed into a Club Med and later, a Foot Locker shoe store.

Though we often look at history through people and events, it is important to remember that exploring the past through locations can be just as meaningful. Whether a frozen tennis court in the Himalayas, a bullring in Mexico or a Vaudeville theatre in Montreal, figure skating has made its mark in some pretty unique places.

Skate Guard is a blog dedicated to preserving the rich, colourful and fascinating history of figure skating and archives hundreds of compelling features and interviews in a searchable format for readers worldwide. Though there never has been nor will there be a charge for access to these resources, you taking the time to 'like' on the blog's Facebook page at http://www.facebook.com/SkateGuard would be so very much appreciated. Already 'liking'? Consider sharing this feature for others via social media. It would make all the difference in the blog reaching a wider audience. Have a question or comment regarding anything you have read here or have a suggestion for a topic related to figure skating history you would like to see covered? I'd love to hear from you! Learn the many ways you can reach out at http://skateguard1.blogspot.ca/p/contact.html.
Posted by Skate Guard Blog at April 18, 2018
Email ThisBlogThis!Share to TwitterShare to FacebookShare to Pinterest
Newer Post Older Post Home