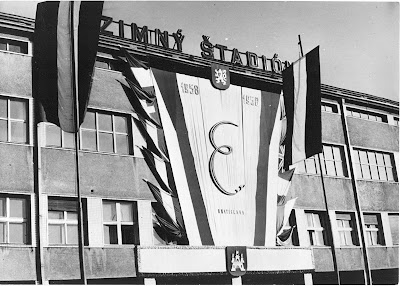 From January 30 to February 2, 1958, Zimný štadión in Bratislava played host to the first post-World War II European Figure Skating Championships to be held entirely on indoor ice. A whopping seventy entries from eleven countries participated. The event, organized by the Czech State Committee For Physical Training And Sport, marked the first time the Europeans were held in Czechoslovakia since 1948, ten years prior. Vladislav Cáp, a Czechoslovakian engineer who competed at the 1948 European Championships, designed the event's emblem - the letter 'E' with a skate blade. 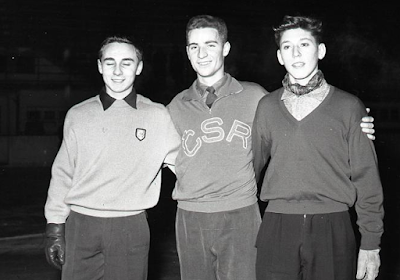 The event marked the first time in history that the European Championships were televised in eleven countries - three of them in Eastern Europe - via Eurovision. Over the course of four days, a total of approximately ninety minutes of coverage was aired, though the BBC pre-empted coverage of the medal winning free dances in favour of football and pheasant shooting 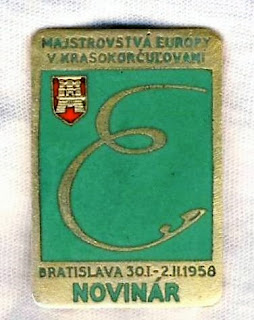 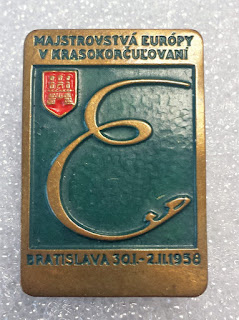 Considering the anti-German sentiment and post-War expulsions of Germans in Czechoslovakia following World War II, the West German contingent of skaters was treated exceptionally well. Heinz Magerlein recalled, "The reception [in Bratislava] was very touching when, after a long journey, the German team got out of the passenger train shortly before midnight and delegations from sports clubs and companies had arrived. Poems and welcome speeches were recited in hard German, and from the Gesidern the joy shone, that we had come. In the shop windows of the prisoners we saw everywhere indications of the ice sports event, sculptures made of dough, fabric decorations, etc. However, the very spacious sports hall had a drawback: from an open piece of the roof soot fell on the ice and had left a fine layer that looked like emery and damaged the expensive ice skates badly." 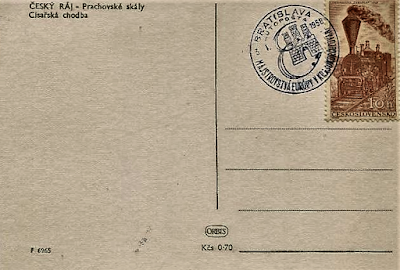 Let's take a look back at how things played out on the ice in Bratislava! 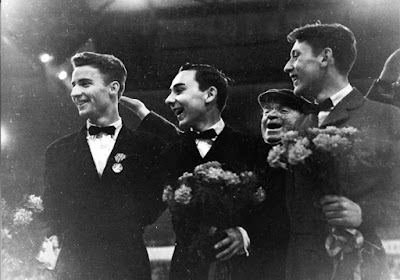 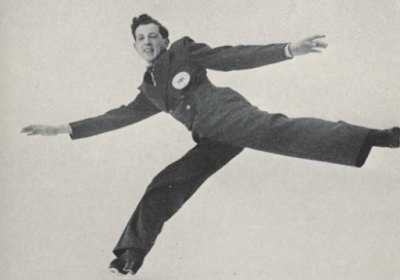 Alain Calmat, who had been fifth in figures, won the free skate over Alain Giletti with eight first place ordinals and an impressive double Axel. Divín received the ninth first place ordinal from the West German judge W. Stanek. That same judge was the only one to place Calmat fourth in free skating. Divín narrowly defeated Giletti overall, with Calmat moving up to take the bronze over Booker. It was the first time in history a Czechoslovakian man won a European title, and Divín
fittingly managed to do it in his home country... defeating the defending champion in the process.


Norbert Felsinger of Austria placed fifth and a trio of West Germans finished sixth through eighth. Tilo Gutzeit, the top skater of the bunch, received second place ordinals in the free skate from the Czechoslovakian and Soviet judges. 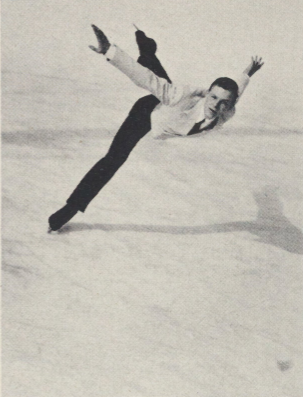 Manfred Schnelldorfer, who placed seventh, suffered a wardrobe malfunction. Heinz Magerlein recalled, "In the freestyle, Manfred picked again, as so often, the starting number one. I had fastened Manfred's silver-shimmering tie with a small safety pin on the high waistband of the coat trousers. His spinning spurred the spectators on to hurricane applause. The tie had come loose from the attachment and struck him in front of his eyes, his nose, his mouth... In between it wrapped itself once or twice and around his neck and it did not wiggle. What was worse: looking for me or skating for Manfred? He did not fall, but he fought a desperate fight with the tie, which shook his sight and direction. One could see that he was close to bursting.... I blamed myself and decided to check everything out ten times since and have kept that tie to this day." 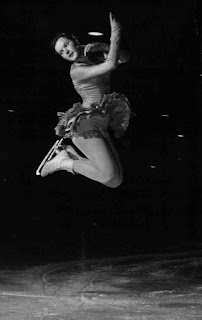 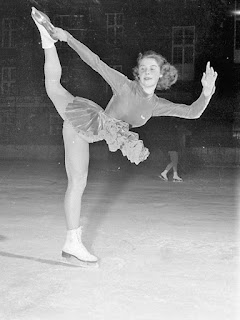 Defending champion Hanna Eigel had turned professional, leaving the European women's title up for grabs. Eight judges had her compatriot Ingrid Wendl first in figures, while the Italian judge tied her with Hanna Walter, who finished second. Joan Haanappel was a unanimous third. France's Dany Rigoulot earned ordinals ranging from fourth to seventeenth in figures... highlighting the nightmarish judging that was to come in the free skate. 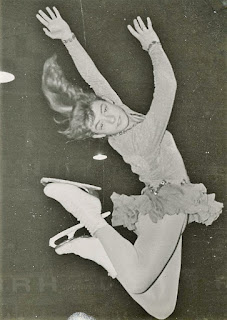 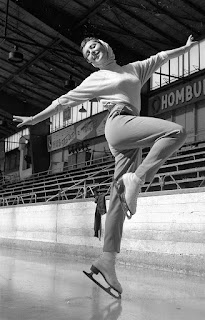 Ingrid Wendl decisively won the free skate with seven first place ordinals but that was about the only thing the judging panel could seem to agree on. Six judges had Hanna Walter in the top three; the Swiss judge had her eleventh. Jidrinka Kramperova had ordinals ranging from second to fifteenth. Five judges had Karin Frohner in the top three; the Czechoslovakian judge had her eleventh. The West German judge had Regine Heitzer in a tie for first, while the Polish judge had her a tie for eighth. Strangely enough, when the overall marks were tallied all but one judge had Wendl first, all but one judge had Walter second and every judge had Haanappel third. Yet Jana Docekalova of Czechoslovakia, who earned two first place ordinals in the free skate, finished eleventh overall. 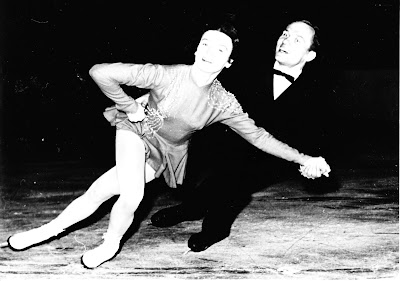 More than fifteen thousand spectators showed up for the pairs event... and the bizarre judging continued! Though Věra Suchánková and Zdeněk Doležal defended their title unanimously, no less than eight teams received top three ordinals. Nina and Stanislav Zhuk, Joyce Coates and Anthony Holles and Marianna and László Nagy, who placed second through fourth, were three of those teams. The Zhuk's and Coates and Holles' medal wins were both considered surprises as they had only finished fifth and sixth the year prior at Europeans. 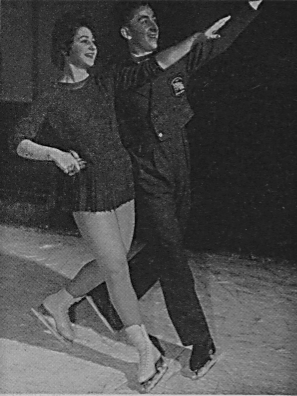 Another team earning a top three ordinal was Marika Kilius and Hans-Jürgen Bäumler, who one judge tied for second and another placed thirteenth. Heinz Magerlein recalled, "They had left the hotel in good time with car, but a railway barrier had considerably delayed the journey. Since they had pulled start number 1 - which also had their share in fifth place! - of course, they were resented in the rink, which was filled to capacity... Lacking concentration and still under the impact of the annoying [delay] they milled about the ice, and their performance fell short of their potential."


Ludmila Belousova and Oleg Protopopov, who received no first place ordinals, were tenth with scores ranging from fourth to thirteenth. It was the young Soviet couple's first appearance at the European Championships. Perhaps most dramatic were the scores of the Austrian team who finished eleventh. The British judge had them second, while the Polish judge had them fifteenth and dead last.

One has to doubt whether any of the ice dancers complained when only five judges sat rink side to judge them instead of nine. In contrast to the women's and pairs events, the judging in dance was somewhat less controversial... at least near the top. To no one's surprise, defending champions June Markham of Durham and Courtney Jones of Bournemouth were the unanimous winners of both the compulsories and free dance. In his book "This Skating Age" Howard Bass recalled, "The cost of travel and accommodation for two people from London to [Bratislava and Paris - the site of the 1958 World Championships] can be reckoned at well over one hundred pounds. The sum actually allowed them by the N.S.A. was twenty pounds each. So patriotic Britons must thank the fact that Courtney and June happened to be able to raise sufficient money themselves to pay for the privilege of winning these titles for their country! As their compatriot, I feel like hiding my head in national shame. How humbling, how utterly humiliating!"

Though France's Christiane and Jean Paul Guhel managed to defeat Barbara Thompson and Gerard Rigby in the free dance, they weren't able to move up to take the bronze. Catherine Morris and Michael Robinson and Thompson and Rigby joined Markham and Jones on the podium in the fifth consecutive British sweep of the ice dance podium at the European Championships. Interestingly, the
teams who placed fifth through seventh each received ordinals ranging from fifth through tenth.
Svetlana Smirnova and Leonid Gordon made history as the first Soviet dance team to compete at the
European Championships. They placed dead last.

Skate Guard is a blog dedicated to preserving the rich, colourful and fascinating history of figure skating and archives hundreds of compelling features and interviews in a searchable format for readers worldwide. Though there never has been nor will there be a charge for access to these resources, you taking the time to 'like' on the blog's Facebook page at http://www.facebook.com/SkateGuard would be so very much appreciated. Already 'liking'? Consider sharing this feature for others via social media. It would make all the difference in the blog reaching a wider audience. Have a question or comment regarding anything you have read here or have a suggestion for a topic related to figure skating history you would like to see covered? I'd love to hear from you! Learn the many ways you can reach out at http://skateguard1.blogspot.ca/p/contact.html.
Posted by Skate Guard Blog at August 07, 2018
Email ThisBlogThis!Share to TwitterShare to FacebookShare to Pinterest
Newer Post Older Post Home