From Stilt Skaters To Sun City: Show Skating In South Africa Under Apartheid

Back in November of 2015, we took a look at how competitive figure skating developed in South Africa and the role that apartheid played in limiting the early international development of amateur skaters in that country. The same factors ultimately applied to the growth of professional and show skating in that country but there were a couple of notable exceptions.


In 1936, British Open Professional Champions Sadie Cambridge and Albert Enders and World and European Medallist Daphne Walker gave an exhibition at the Empire Exhibition Rink in conjunction with the World's Fair in Johannesburg. Then in the early fifties, a former member of Sonja Henie's troupe named Bob White brought his show "Ice Frolics" to Johannesburg. Quoted in the August 2, 1954 edition of "The Courier-Mail" in Brisbane, he claimed, "A team of Zulus broke the ice up with sledgehammers in 120 minutes." White starred in the show with his wife and pairs partner Peggy. Other members of the forty skater cast included stilt skater Doel Johnson and ice ballerina Helen Hayes.

Left: Peggy and Bob White in "Ice Frolics"; Right: an advertisement for Marjorie Chase's "Jack And The Beanstalk On Ice"

From the mid fifties to the early nineties, touring ice revues such as the Ice Capades occasionally made stops in South Africa. A skater named Marjorie Chase who emigrated the country after World War II produced a yearly Christmas ice pantomime at the Durban Ice Rink, which was called Ocean City. Chase's shows would have been largely modelled after the highly popular ice pantomimes produced by Claude Langdon and Tom Arnold in England during the fifties. South African skating history buff Irvine Green explained to me that on one occasion the pantomime toured to Bloemfontein, about four hundred miles west of Durban. "Where they got the equipment to produce ice I don't know," he said. "Probably locally. Perhaps using a deep gold mine working environment cooling type of idea. I can't imagine large scale ice producing systems were ten a penny back then... and probably mostly imported in those post-war days."

The Pro-Skate Company, headquartered in New York and owned jointly by Concert Productions International of Toronto, Leber/Kriebs and Pro-Skate International of New York, was directed by Elva Clairmont Oglanby, a name you most certainly are familiar with if you've read any of Toller Cranston's books or the John Curry biography, "Alone". In the early eighties, the company produced a touring circuit of professional competitions and exhibitions in Canada that included the likes of John Curry, Peggy Fleming, Dorothy Hamill, Robin Cousins, Toller Cranston, Janet Lynn, Lynn Nightingale, Ron Shaver, Dianne de Leeuw and JoJo Starbuck. 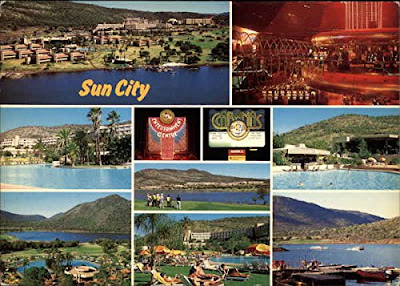 In July 1985, the company made the bold move of staging a professional competition at the Sun City resort in Bophuthatswana, which housed a golf course occupied by baboons and warthogs. Bophuthatswana was a territory under South African control whose independence was recognized by the apartheid government but decried by the United Nations.

A who's who of professional figure skating made the trip, including Scott Hamilton, Toller Cranston, Elaine Zayak, David Santee, Norbert Schramm, Lisa Carey and Chris Harrison, Allen Schramm, Brian Pockar and Carol Fox and Richard Dalley. A number of skaters from South Africa also competed. In his book "Zero Tollerance", Cranston recalled, "The competition, if I'm to be absolutely fair, was between Scott Hamilton and me... That night I gave one of my best performances of recent years. I skated to 'Pagliacci' wearing the peacock costume. Since 'Pagliacci' has never failed and the peacock costume that has never fallen down, I was in rather good shape. Scott skated well also and won, but perhaps his Olympic gold medal was slightly shinier than my bronze. That didn't matter, because we'd all had a great time. The competition ended with a cocktail party in one of the many pavilions on the Sun City grounds." Irvine Green believed that the competition was "kept very hush-hush amongst 'those in the know' to stop international interference and 'attacks' on the foreign skaters."

Results from the 1985 professional competition in Sun City

Despite these fascinating efforts and others, the political climate in South Africa under apartheid simply kept many touring professional shows away. Irvine Green explained, "I am sure we 'missed out' on 'tank shows' due to sanctions. Anyone who had come here would immediately have fallen foul of international support for their shows because they had busted the sanctions on South Africa... We did of course see many international ice shows on TV, as ice skating was a very popular sport on TV in early times [though] TV only came to South Africa in 1975." However stifled by politics the development of professional skating in South Africa was, there's something absolutely delightful about picturing Toller Cranston in a peacock costume skating to "I, Pagliacci" in a territory as controversial as he was.

Skate Guard is a blog dedicated to preserving the rich, colourful and fascinating history of figure skating and archives hundreds of compelling features and interviews in a searchable format for readers worldwide. Though there never has been nor will there be a charge for access to these resources, you taking the time to 'like' on the blog's Facebook page at http://www.facebook.com/SkateGuard would be so very much appreciated. Already 'liking'? Consider sharing this feature for others via social media. It would make all the difference in the blog reaching a wider audience. Have a question or comment regarding anything you have read here or have a suggestion for a topic related to figure skating history you would like to see covered? I'd love to hear from you! Learn the many ways you can reach out at http://skateguard1.blogspot.ca/p/contact.html.
Posted by Skate Guard Blog at December 06, 2018
Email ThisBlogThis!Share to TwitterShare to FacebookShare to Pinterest
Newer Post Older Post Home