Monica's "Angel Of Mine" topped the music charts. Mike Tyson had just been sentenced to a year in prison after assaulting two people a year earlier; President Bill Clinton was acquitted in the U.S. Senate's impeachment trial. Pokémon were the latest fad and the 'Y2K' talk was already in full swing. The year was 1999 and from February 21 to 28, a who's who of figure skating gathered at the Halifax Metro Centre in Halifax, Nova Scotia for the first ever Four Continents Figure Skating Championships. 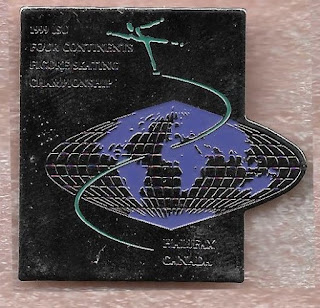 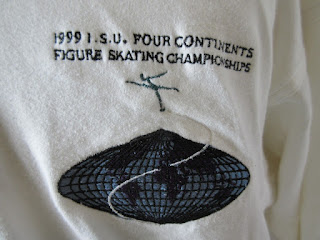 Pin and sweater from the 1999 Four Continents Championships

The event, conceived by the ISU as the equivalent to the European Championships, was awarded to Halifax in June of 1997. It was a big win for the Maritime city which played host to Skate Canada International that autumn. It was also a win for the CFSA, who had just played host to the highly successful World Championships in Edmonton the year prior. The countries eligible to participate at the time were Australia, Canada, China, Chinese Taipei, Hong Kong, Japan, Kazakhstan, Mexico, Mongolia, New Zealand, North Korea, South Africa, South Korea, Thailand, the United States and Uzbekistan. Each country was permitted to have up to three skaters in all four disciplines; all but four of the eligible countries sent entries. All-event tickets, which went on sale in September of 1998, ranged from forty nine to sixty five dollars. Single event tickets went for as low as ten dollars. CTV and CTV Sportsnet had the Canadian broadcast rights. Skaters and media alike were glad to have the pedway system from the Delta Barrington to the Halifax Convention Center, as the weather outside was frightful... snowstorm frightful. 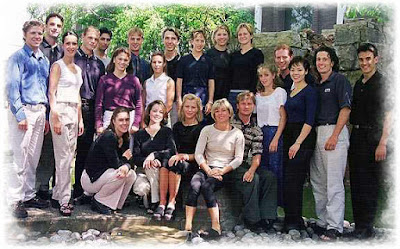 The total purse of prize money was five hundred and seventeen thousand dollars; the exact same amount disbursed at that year's Europeans. An interesting 'behind the scenes' note about this event was the fact it was one of the first times that an instant video replay system was available for judges at an ISU Championship. Some found it odd that there were judges from Europe at the event, but it was really a non-issue as both Canadians and Americans had judged at the Europeans in Prague.

Another criticism, perhaps more valid, involved the entry lists. While the CFSA initially named the top three in each discipline, the USFSA sent what the Canadian press deemed 'a farm team' of skaters. U.S. Champions Michelle Kwan and Michael Weiss weren't named to the team. Matt
Savoie, Sarah Hughes, Laura Handy and Paul Binnebose and Eve Chalom and Matthew Gates also passed. Thirteen year old Naomi Nari Nam, the U.S. Silver Medallist, also wasn't named, but she was too young to be eligible to compete anyway. Canada's number two pair Jamie Salé and David Pelletier withdrew prior to the event due to a herniated disc in Pelletier's back. They were not replaced, as the fourth place team at Canadians (Nadia Micallef and Bruno Marcotte) had split up after the Canadian Championships. Let's take a look back at the great skating from this historic event!

The new addition of the throw double or triple jump made the pairs short program far more exciting. China's Xue Shen and Hongbo Zhao were the unanimous winners, but had low marks as they were first to skate. Canadian Champions Kristy Sargeant and Kris Wirtz missed both the side-by-side jumps and their throw and sat in fourth after the short. Shen and Zhao's daring free skate earned them marks ranging from 5.5 to 5.8 and the gold medal - the first major ISU Championship title ever won by a Chinese pairs team. Sargeant and Wirtz rebounded to take the silver; American siblings Danielle and Steven Hartsell earned the bronze.


Canada's second pair, Valerie Saurette and Jean-Sébastien Fecteau, had been second after the short. They had a terrifying fall on a throw double Axel in the warm-up for the free skate where she slammed into the boards, knocked the wind out of herself and bruised her right hip and ribs. Though the Quebec pair dropped to fourth, they earned a standing ovation for skating their ominous "Carmina Burana" program through the pain. Afterwards, Saurette told reporters, "When I breathe, it hurts. My knee hurts. My hip hurts. My shoulder hurts. Everywhere. It's going to be worse tomorrow." 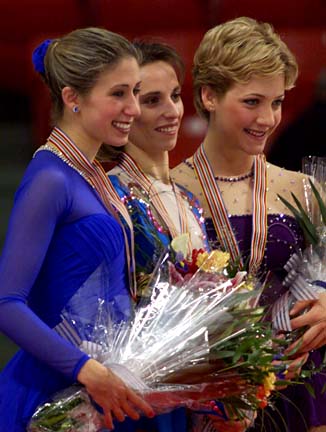 Amber Corwin, Tatiana Malinina and Angela Nikodinov on the podium in Halifax

Twenty women from nine countries competed. Twenty six year old Tatiana Malinina of Uzbekistan was in a class of her own, unanimously winning both phases of the competition with consistent, relatively difficult programs. Her winning free skate included four clean triples. Amber Corwin, the lowest ranked of the three U.S. women at her recent Nationals, took the silver ahead of Angela Nikodinov, Erin Pearl and Japan's Fumie Suguri. All three of the Canadian women - Jennifer Robinson, Angela Derochie and Annie Bellemare - had disappointing results. Robinson was seventh, Derochie tenth and Bellemare twelfth. Bellemare had landed her triple Lutz combination in the short program but fallen on her footwork sequence and double Axel.

Canadian Champions Shae-Lynn Bourne and Victor Kraatz took an early lead with the Tango Romantica and Blues and expanded upon it with a gorgeous performance of their "Seachran" original dance, a Waltz. Chantal Lefebvre and Michel Brunet's Waltz to "It's A Most Unusual Day" moved them ahead of American Champions Naomi Lang and Peter Tchernyshev. The top three remained the same in the free dance, with Megan Wing and Aaron Lowe rallying back after a seventh place finish in the compulsories to finish fourth. Bourne was competing with torn cartilage in left knee. She'd injured it during practice at Canadians but kept it relatively quiet.

During one of the practices, China's Zhengxin Guo smashed into the boards and dislocated his shoulder. Eighteen year old Emanuel Sandhu had a bad case of the flu all week and was barely able to keep his meals down. Japan's Takeshi Honda had missed his Nationals due to an ankle injury and was very careful in practice. Elvis Stojko was still recovering from groin injury that he'd struggled with at Nagano Olympics the year prior. He told reporters he was "at 80 to 85 percent" but was petitioning the ISU to withdraw from the upcoming Grand Prix Final on medical grounds. ISU President Ottavio Cinquanta was in Halifax for the event and told reporters it was the ISU's duty "to trust, to accept what the tongue is saying." Both Stojko and Bourne and Kraatz ultimately withdrew from the Final.


In the short program, twenty two year old Min Zhang of China made history as the first skater to land a solo quadruple jump in the short program at an ISU Championship. It was the first season that the ISU allowed quads in the men's short and Zhang had skated right after his idol Stojko, who two-footed his attempt. Remarkably, it was Zhang's first major ISU Championship since he competed at the 1994 World Championships in Japan... where he didn't even make it out of the qualifying round. Two judges had Zhang first in the short program, but the rest of the panel went with Takeshi Honda, who skated a less difficult, though more well-rounded program.


Takeshi Honda skated superbly in the free, landing eight triples and taking the gold over Chengjiang Li and Elvis Stojko. Zhang dropped to fourth, while Sandhu and Canada's third man, Jean-François Hébert, finished tenth and eleventh. Three quads were landed in the free skate - a solo quad by Zhengxin Guo and quad/triples from Anthony Liu and Chengjiang Li.

Skate Guard is a blog dedicated to preserving the rich, colourful and fascinating history of figure skating and archives hundreds of compelling features and interviews in a searchable format for readers worldwide. Though there never has been nor will there be a charge for access to these resources, you taking the time to 'like' the blog's Facebook page at http://www.facebook.com/SkateGuard would be so very much appreciated. Already 'liking'? Consider sharing this feature for others via social media. It would make all the difference in the blog reaching a wider audience. Have a question or comment regarding anything you have read here? Have a suggestion for a topic related to figure skating history you would like to see covered? I'd love to hear from you! Learn the many ways you can reach out at http://skateguard1.blogspot.ca/p/contact.html.
Posted by Skate Guard Blog at February 07, 2019
Email ThisBlogThis!Share to TwitterShare to FacebookShare to Pinterest
Newer Post Older Post Home