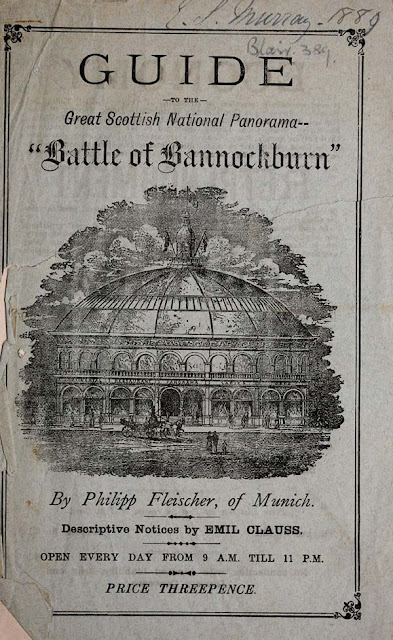 Though Edinburgh holds the distinction of playing host to the first skating club in both Scotland and the world, Glasgow can perhaps lay claim to being the first Scottish city to have its own artificial ice rink.

Built in 1888, the domed Panorama Building on Sauciehall Street in Glasgow was the definition of Victorian era luxury in Scotland. It first played host to a European style Continental Restaurant and Ladies Café which catered to the city's high society. Visiting German artist Philipp Fleischer painted a dramatic panorama of the 1314 Battle Of Bannockburn in 1314 on its walls, where the Scots triumphantly defeated the English. The art installation served quite a conversation piece while the Lords and Ladies sipped tea imported from Ceylon and nibbled on shortbreads and scones.

All that changed on May 16, 1896, when the building was repurposed as The Glasgow Real Ice Skating Palace by Gordon Cameron, one time chairman of the National Skating Palace at Hengler's Circus in London. Financed by a group of men whose interests lied mainly in mining, the Palace was a novelty artificial rink in the vein of the Glaciariums. Skates were rented at reasonable fees and skaters enjoyed music played by a live orchestra, light refreshments and a 'cinematographe' which projected images on a screen while they carved out threes and eights on the same vile, noxious ice that was sneered at in London. 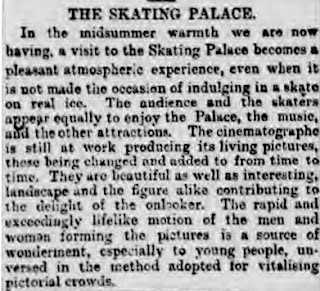 Clipping from the June 16, 1896 edition of "The Glasgow Herald", graciously provided by Mr. Bob Cowan

Renovations of the building were extensive. A new floor was installed as well as a stage in its north-east corner, of a size sufficient to accommodate up to one hundred performers. Fleischer's panoroma painting remained and was incorporated into the decor. The October 9, 1895 issue of "The Glasgow Herald" noted, "The freezing engines employed are those known as Messrs. J. & E. Hall's No. 6 Carbonic Anhydride process. These engines are capable of producing 50 tons of ice per day, and compared with the old-fashioned compressed air and chemical systems the saving in fuel is very great."

Unfortunately, curling and hockey quickly overran the rink and the members of the Glasgow Skating Club ultimately decided to stay loyal to their outdoor pond near the city's asylum until the Crossmyloof rink was constructed in 1907, replete with a bandstand at center ice. In no time flat, the
The Glasgow Real Ice Skating Palace faded into obscurity, a huge loss to its investors and a fascinating footnote in skating history.

Skate Guard is a blog dedicated to preserving the rich, colourful and fascinating history of figure skating and archives hundreds of compelling features and interviews in a searchable format for readers worldwide. Though there never has been nor will there be a charge for access to these resources, you taking the time to 'like' on the blog's Facebook page at http://www.facebook.com/SkateGuard would be so very much appreciated. Already 'liking'? Consider sharing this feature for others via social media. It would make all the difference in the blog reaching a wider audience. Have a question or comment regarding anything you have read here or have a suggestion for a topic related to figure skating history you would like to see covered? I'd love to hear from you! Learn the many ways you can reach out at http://skateguard1.blogspot.ca/p/contact.html.
Posted by Skate Guard Blog at April 09, 2019
Email ThisBlogThis!Share to TwitterShare to FacebookShare to Pinterest
Newer Post Older Post Home