The Rhythm Girl With The Red Hair: The Mae Ross Story 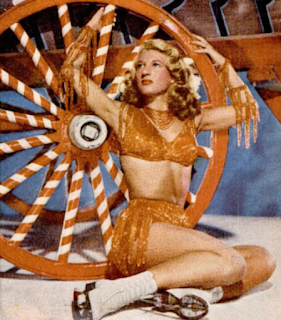 Born April 23, 1924 in Methuen, Massachusetts, (Julia) Mae Ross was the daughter of Robert and Kathleen (Butler) Ross. By the time she was six, Mae's mother had moved her and her sister June Rae to Portland, Maine. Kathleen supported her girls by managing a rooming house. After a time, the Ross family relocated to Boston, where Mae and June studied ballet, tap, ballroom and acrobatic dancing. At the age of eight, Mae added figure skating to her ever growing list of hobbies.

When Mae and June were teenagers, they moved with their mother to Los Angeles, California. While attending the Mar-Ken Professional School - which focused on show biz children - the girls hung around the MGM, Fox and Warner Brothers lots. Mae's fire engine red hair caught the eye of the studio execs and landed her dancing roles in several films, including "Music In The Air" and "The Painted Veil".  By 1940, the five hundred dollars she made a year was helping keep a roof over her mother and sister's heads. 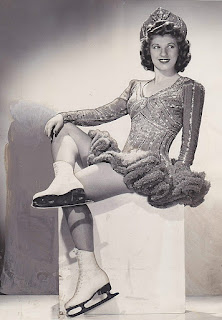 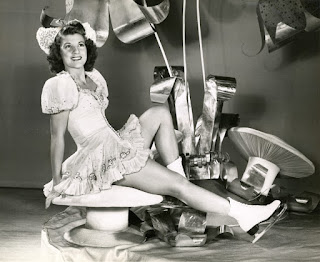 Mae's 'big break' was a starring role in MGM's short-lived ice ballet at the Persian Room in the St. Francis Drake Hotel in San Francisco. Though skating had been nothing more than a hobby of her youth, she managed to turn heads on the nineteen by thirty inch tank enough to earn a part in an ice show at the Mark Hopkins Hotel. However, it wasn't until this self-made skater joined the cast of the Ice Follies at the age of fifteen that people really started to pay attention. 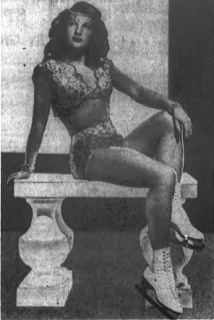 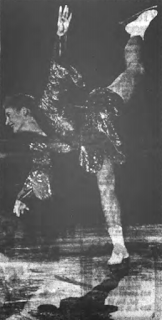 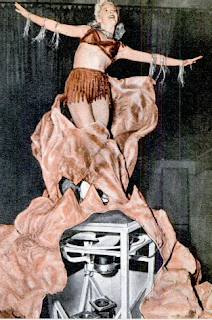 When she was performing with the Ice Follies, Mae was married to a skater named Bill Stine, who doubled as the tour's director and stage manager. A budding actor and assistant director in films, Bill helped promote Mae and skated pairs with her too.  She was billed as a 'rhythm girl', but she soon became known for her interpretive skating and ability to act on the ice. She played everything from a tightrope walker to a gypsy captive of pirates and even the 'Daughter of the Shah' in an act called 'Persian Festival' on the 1948 tour. When she wasn't skating, Mae was swimming, horseback riding, listening to Bob Hope on the radio and putting her airplane pilot's license to use. 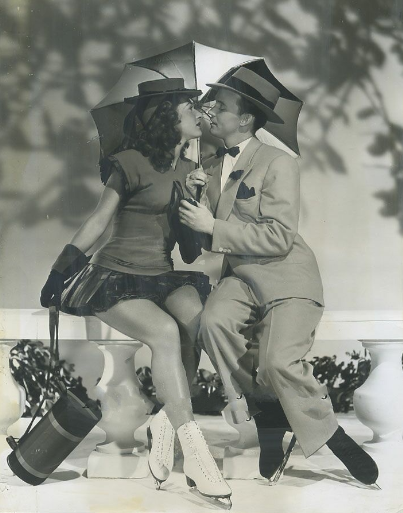 Not long after Bill and Mae divorced, she hung up her skates and moved to Texas, where she remarried and became a mother. She passed away at the age of eighty one on April 10, 2005 in Midland, Texas... her time in the spotlight as one of the leading ladies of the Ice Follies all but forgotten.

Skate Guard is a blog dedicated to preserving the rich, colourful and fascinating history of figure skating and archives hundreds of compelling features and interviews in a searchable format for readers worldwide. Though there never has been nor will there be a charge for access to these resources, you taking the time to 'like' on the blog's Facebook page at http://www.facebook.com/SkateGuard would be so very much appreciated. Already 'liking'? Consider sharing this feature for others via social media. It would make all the difference in the blog reaching a wider audience. Have a question or comment regarding anything you have read here or have a suggestion for a topic related to figure skating history you would like to see covered? I'd love to hear from you! Learn the many ways you can reach out at http://skateguard1.blogspot.ca/p/contact.html.
Posted by Skate Guard Blog at April 14, 2019
Email ThisBlogThis!Share to TwitterShare to FacebookShare to Pinterest
Newer Post Older Post Home