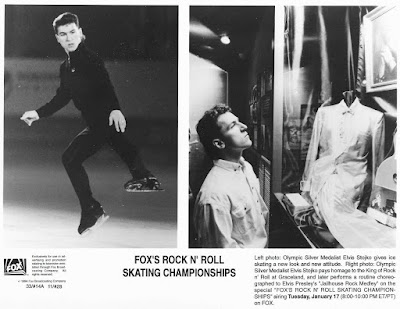 "Right now it's somewhere between wrestling and American Gladiators. It's given the skating audience what they wanted - more!" - Evy Scotvold, "Newsweek", February 13, 1995

In the flood of professional figure skating competitions that materialized in the wake of the Lillehammer Olympics, one event certainly stood out for its uniqueness. The Rock N' Roll Skating Championships were a concoction of Michael Burg, the Executive Producer of Jefferson-Pilot Productions and veteran network sports director Joseph Aceti. Unlike other professional competitions where skaters were given more or less free reign to choose what style of program to use, the Rock N' Roll Skating Championships tried to appeal to a "younger, hipper audience" by asking skaters to perform only to contemporary hits. The FOX network billed the event as "a skating competition with an attitude" and brought in D list celebrities with no skating background to score the skater's two artistic programs on Artistic Interpretation, Individual Performance, Entertainment Value and Audience Reaction.


The first Rock N' Roll Skating Championships were held on December 1, 1994 at the Mid-South Coliseum in Memphis, Tennessee. For twenty five to thirty five dollars, residents of the city known as the Birthplace of Rock 'n Roll and Barbecued Pork Capital of the World were treated to 'the first head-to-head competition' between Oksana Baiul and Nancy Kerrigan since the Lillehammer Olympics. The two Olympic medallists had faced off less than a month earlier at the Ice Wars team event in Uniondale and Providence but had represented the U.S.A. and The World, receiving combined scores with their teammates. As in Norway, Oksana Baiul took the title over Nancy Kerrigan... by one-tenth of a point again.


Rallying the crowd with his trademark program to Aerosmith's "Walk This Way", Scott Hamilton took the men's title over Viktor Petrenko. Some of the music choices were unusual for a competition billed the Rock 'N Roll Skating Championships. Rosalynn Sumners skated to Kenny G's "The Wedding Song"; Oksana Baiul skated to new age group Enigma. The marking was also at times unusual. Mark Mitchell's performance to Prince's "Baby I'm A Star" received marks ranging from 9.0 to a perfect 10.0. Gary Beacom received marks below 9.0 - a rarity in professional competition - while others received 10.0's, perhaps in excess. A sanction was obtained for Elvis Stojko to give an exhibition in conjunction with the competition. Philippe Candeloro had initially been announced as a competitor, but decided to remain amateur. Peggy Fleming refereed the judges panel, which included MTV's Downtown Julie Brown, gymnastics coach Béla Károlyi and NHL hockey player Bryan Trottier. The event's original broadcast on January 17, 1995 (commentated by Kurt Browning and Pat O'Brien) earned an impressive 13.5 Nielsen rating... on a Tuesday night.

On December 6, 1995, the Rock N' Roll Skating Championships moved to the North Charleston Coliseum in Charleston, South Carolina. The women's event proved to be an exact repeat of The Gold Figure Skating Championships (an event open only to Olympic Gold Medallists) less than two weeks prior in Vancouver. Kristi Yamaguchi took the title skating to the music of Tanya Tucker and Björk, besting Oksana Baiul and Katarina Witt - the exact same result as in British Columbia.

Scott Hamilton defended the men's title, besting Kurt Browning and Jozef Sabovčík this time. The 1995 event marked the only time the Rock N' Roll Skating Championships included a pairs competition, which was won by Isabelle Brasseur and Lloyd Eisler.

Barbara Underhill and Paul Martini finished third. It was the first time they lost a competition in the nineties and consequently, one of Brasseur and Eisler's few wins as pros. The event was televised on FOX on January 16, 1996, with James Brown and Dorothy Hamill acting as hosts.

The third and final Rock N' Roll Skating Championships were held on December 4, 1996, again in Charleston, South Carolina. Scott Hamilton won the event for the third consecutive time, besting Kurt Browning, Viktor Petrenko, Jozef Sabovčík and Gary Beacom. In what was considered quite the upset at the time, Liz Manley defeated Kristi Yamaguchi in the women's competition. She brought down the house with her first program to Diana Ross' rendition of "I Will Survive" then power balladed her way to win with a program to Céline Dion's "Call The Man". It was Manley's first win as a professional since the Legends Of Figure Skating Competition in September of 1995. The event also marked one of only two times that both Jill Trenary and Debi Thomas competed post-Lillehammer. The event was aired on FOX on January 14, 1997. Unfortunately, this event was one of many professional events to get the ax prior to the 1998 Olympic season, as over saturation of the market lead to a drop in ratings.

The competition inspired the Skate TV Championships, an unrelated competition with an eerily identical format held on April 24, 1998 in Charleston, South Carolina. The special aired on ABC and featured the professional debuts of World Medallists Tara Lipinski, Surya Bonaly and Viacheslav Zagorodniuk. The ABC executives aimed at "winning back the under 50 crowd" (sound familiar?) with skaters performing to pop music like Save Ferris and Massive Attack, but the competition failed spectacularly in the ratings. One of its flaws was the fact that skaters were "required" to do a minimum number of triple jumps in their programs. By that point in time, Katarina Witt and Oksana Baiul rarely attempted more than one. Not that the judges, who had no skating background whatsoever, would have likely known the difference. Michael Davies, executive vice president, alternative series and specials at ABC, told reporters, "This might not be an incredibly popular view, especially with the skating community, but there has not been a great deal of innovation or uniqueness to redefine what a skating special should be. I do think there's a need to react; both the skating community and TV community have to look at how they're covering it."

Skate Guard is a blog dedicated to preserving the rich, colourful and fascinating history of figure skating and archives hundreds of compelling features and interviews in a searchable format for readers worldwide. Though there never has been nor will there be a charge for access to these resources, you taking the time to 'like' the blog's Facebook page at http://www.facebook.com/SkateGuard would be so very much appreciated. Already 'liking'? Consider sharing this feature for others via social media. It would make all the difference in the blog reaching a wider audience. Have a question or comment regarding anything you have read here? Have a suggestion for a topic related to figure skating history you would like to see covered? I'd love to hear from you! Learn the many ways you can reach out at http://skateguard1.blogspot.ca/p/contact.html.
Posted by Skate Guard Blog at April 02, 2019
Email ThisBlogThis!Share to TwitterShare to FacebookShare to Pinterest
Newer Post Older Post Home