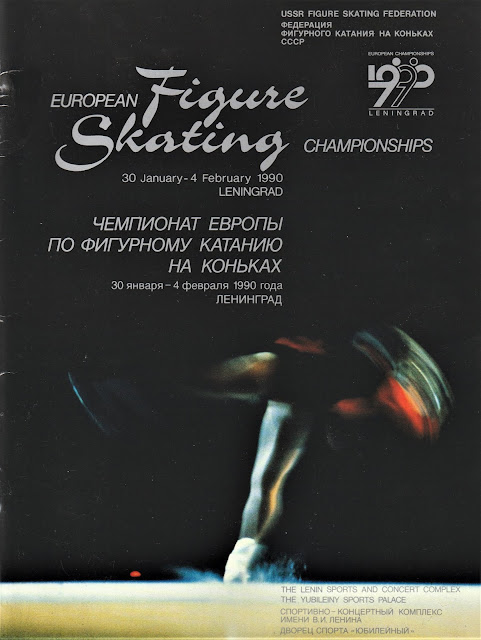 Held from January 30 to February 4, 1990 in Leningrad (now St. Petersburg), the 1990 European Figure Skating Championships provided a welcome distraction from the long Russian winters for some fifteen thousand spectators. Without a doubt, it was a historic competition. 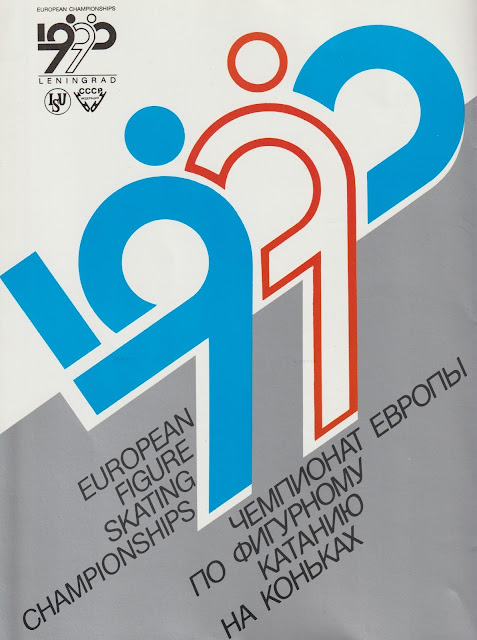 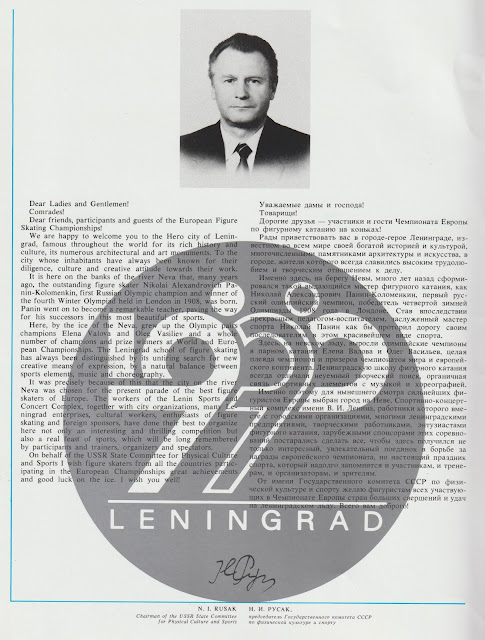 Three venues were used. The official opening draws were held at the Pulkovskaya Hotel, men's and women's figures were held at the Yubileiny Sports Palace and all other events were held at The Lenin Sports and Concert Complex. The ISU's representative was Josef Dědič and the chairman of the local organizing committee was Vasily Rogovtsev, who also acted as the first deputy chairman on the Executive Committee of the Leningrad City Soviet of People's Deputies. 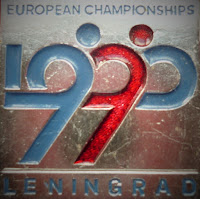 Today on the blog, we will look back at many of the fascinating stories from those 1990 Championships!

Thirteen teams competed in the pairs event in Leningrad, which many perceived was going to be a cake walk for Ekaterina Gordeeva and Sergei Grinkov, the defending Olympic and World Champions. However, three shocking errors - a missed double Axel from Gordeeva, unison problems on the side-by-side spins and a slip on the death spiral - found them third in the short program behind their teammates Natalia Mishkutenok and Artur Dimitriev and Larissa Selezneva and Oleg Makarov. "We weren't in very good shape," admitted Gordeeva in "My Sergei: A Love Story", her 1996 book. "Sergei's shoulder was only part of the problem. I was still having difficulty with my jumps, because of my body change... We were atrocious." The next morning on Soviet television, they were lambasted. They responded with one of their finest performances of their free skate set to "Romeo And Juliet", choreographed by Marina Zoueva.


Gordeeva and Grinkov earned a spate of 5.8's and 5.9's and sole perfect mark of 6.0 to move up and claim the gold medal ahead of Selezneva and Makarov and Mishkutenok and Dimitriev. East Germans Peggy Schwarz and Alexander König and West Germans Anuschka Gläser and Stefan Pfrengle rounded out the top five.

American born Richard Zander, representing West Germany, earned the distinction of being the final men's figure skater in history to win the figures at the European Championships. However, a disastrous short program ultimately plummeted him out of medal contention. The short program was won brilliantly by Czechoslovakia's Petr Barna, whose masterful performance, which included a triple Lutz/triple toe-loop, triple loop and double Axel, was rewarded with marks ranging from 5.5 to 5.9. He held an ever so slight lead over Soviets Viktor Petrenko and Viacheslav Zagorodniuk and Poland's Grzegorz Filipowski, who trained in Rochester, Minnesota, entering the final phase of the competition.


When Petr Barna faltered on a quad attempt in the free skate, twenty year old Viktor Petrenko responded with an outstanding free skate that featured six triple jumps (including a solid triple Axel/triple toe-loop combination) to move up and win his first European title in his home country.


Petr Barna took the silver, followed by Zagorodniuk, Filipowski, Zander and Switzerland's Oliver Höner. Although he finished eighth after placing fourteenth in the figures, a young Frenchman named Philippe Candeloro turned many heads by coming out of nowhere and landing two triple Axel's in the short program in his European debut... and placing eleven spots above French men's champion Éric Millot.

"It was one of the worst events I've ever seen," remarked Scott Hamilton, commentating for American television. He was pretty much spot on. After winning the figures and short program, the competition appeared to be Natalia Lebedeva of the Soviet Union's to lose. And that's precisely what she did in her meltdown of a free skate in Leningrad, settling for silver behind eighteen year old Evelyn Grossmann of Karl Marx-Stadt, a student of Jutta Müller, who really didn't fare much better. 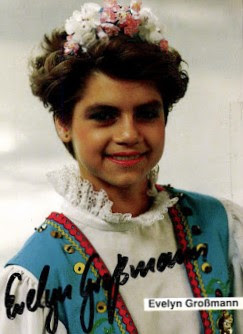 West Germany's Marina Kiellmann took the bronze ahead of a sixteen year old dynamo from France named Surya Bonaly. Coached by Didier Gailhaguet, Bonaly wasn't even in the top ten in the school figures but she grittily attempted two different quads - the Salchow and the toe-loop -in the free skate.


West Germany's Patricia Neske, the Soviet Union's Natalia Skrabnevskaya and Yugoslavia's Željka Čižmešija, who had placed second through fourth in figures, all turned in disappointing free skating performances as well to place fifth, seventh and thirteenth respectively. In contrast with the outstanding skating in the pairs and men's event, the women's event in Leningrad is unfortunately remembered as one of the most lacklustre in the history of the European Championships. It also marked the final time a skater from East Germany won a European title.


Less than two months before the competition, Paul Duchesnay told reporter Herb Zurowsky, "We try to come up with something new, with innovative programs. This sport can be so much more attractive if a certain degree of freedom is allowed. There are so many rules that are not flexible, that take away the possibilities of what can be achieved on the ice. It's a shame, because the sport isn't progressing. Watching the same routines is like watching reruns on television." Armed with a sizzling Samba OSP set to Paul Simon's "Late In The Evening" and a brand new "Missing" free dance to "Dolencias" and "Sikuriadas" - both choreographed by Christopher Dean - the Canadian born brother/sister duo, representing France hoped to break the Soviet ice dance stronghold in Leningrad.

The Duchesnay's were fourth after the compulsories behind Marina Klimova and Sergei Ponomarenko, Maya Usova and Alexander Zhulin and Hungary's Klára Engi and Attila Tóth and a third place finish in the OSP all but dashed any hopes of challenging the top two Soviet teams for the gold. However, in the free dance, the unthinkable happened. In her book "Figure Skating History: The Evolution Of Dance On Ice", Lynn Copley-Graves recalled, "One expected the Soviet audience at Leningrad to support its own ice dancers, but the rebels brought the audience... to its collective feet with the first international unveiling of of the political dictatorship in 'Missing'... The Soviets dared applaud this danced plea for liberty."


Despite the audience's unexpected response to The Duchesnay's performance, Klimova and Ponomarenko's comparatively safe and elegant free dance set to "My Fair Lady" got the nod for the judges for gold. Usova and Zhulin's "Tango Argentina" free dance, termed as "relatively cold" by Nathalie Depouilly in her review in "Patinage" magazine, earned the silver. The Duchesnay's settled for bronze with mostly 5.7's and 5.8's... and one 6.0 for artistic impression from the French judge. Klára Engi and Attila Tóth and Oksana Grishuk and Evgeni Platov (making their debut at Europeans) rounded out the top five.

After the event, Isabelle Duchesnay remarked, "We wanted to prove we could compete against the Russians in Russia. Everybody was thinking that the Duchesnay's didn't have the guts to come and everything was against them. We had to prove that not only we would come, but also were able to do a good job.'' Paul added, "Death, the rain and the judges, we found, are three things you can't control. We are quite happy with the way we skated."

Skate Guard is a blog dedicated to preserving the rich, colourful and fascinating history of figure skating and archives hundreds of compelling features and interviews in a searchable format for readers worldwide. Though there never has been nor will there be a charge for access to these resources, you taking the time to 'like' on the blog's Facebook page at http://www.facebook.com/SkateGuard would be so very much appreciated. Already 'liking'? Consider sharing this feature for others via social media. It would make all the difference in the blog reaching a wider audience. Have a question or comment regarding anything you have read here or have a suggestion for a topic related to figure skating history you would like to see covered? I'd love to hear from you! Learn the many ways you can reach out at http://skateguard1.blogspot.ca/p/contact.html.
Posted by Skate Guard Blog at May 07, 2019
Email ThisBlogThis!Share to TwitterShare to FacebookShare to Pinterest
Newer Post Older Post Home