#Unearthed: Skating: The Fashionable Sport Of The Season When you dig through skating history, you never know what you will unearth. In the spirit of cataloguing fascinating tales from skating history, #Unearthed is a once a month 'special occasion' on Skate Guard where fascinating writings by others that are of interest to skating history buffs are excavated, dusted off and shared for your reading pleasure. From forgotten fiction to long lost interviews to tales that have never been shared publicly, each #Unearthed is a fascinating journey through time. This month's 'buried treasure' is an article from the 1880-81 issue of "Bretano's Monthly" extolling the virtues and health benefits of skating in New York City. It was penned by Henry Chadwick, a renowned English-born American sportswriter and historian.

"SKATING: THE FASHIONABLE SPORT OF THE SEASON" (HENRY CHADWICK) 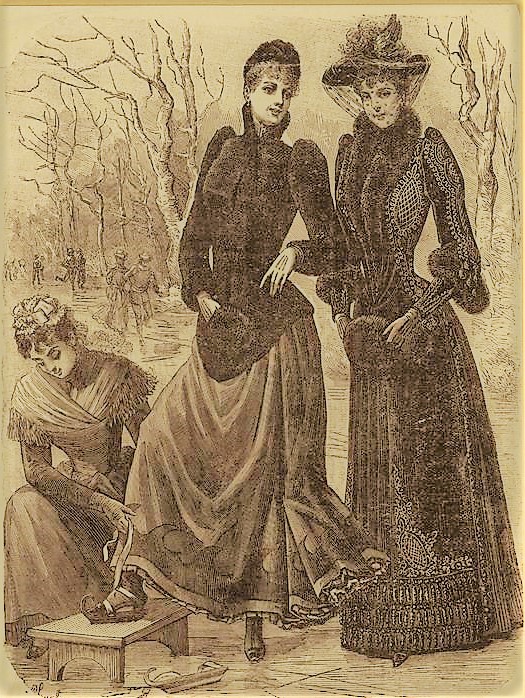 The winter of 1880 and 1881 promises to be quite an exceptional one in regard to the facilities which are to be provided for a full enjoyment of the invigorating and graceful exercise of skating, both as
regards the indoor exercise and the outdoor sport, inasmuch as the Manhattan Polo Association has arranged to transform their grand sporting field into a fashionable skating lake for the winter, and
already we have a very fashionable resort for roller skating at Mr. Greffen's Madison Avenue Rink, near 59th street, which is provided with a splendid asphalt floor surface for the use of the Plimpton roller skates, and with the accessories of music and a select and fashionable patronage, has already become an attractive place for the enjoyment of 'rinking,' as roller skating is called in fashionable circles in England.

There is an attraction about skating - whether on the ice or on an asphalt surface - which is exceeded by no other recreative exercise in vogue. In providing facilities for its enjoyment hitherto, resort has
been had to ice surfaces under cover, such as the artificial ice surface at Gilmore's Garden last winter and at the Madison Avenue ice-skating rink. But all these experiments have proved failures from the
excessive frequency of colds, resulting from standing or even skating in the chill-damp atmosphere of a covered ice rink. In fact, ice skating can only be enjoyed in the open air. Under cover it is dangerous to health; out of doors it is the very reverse. Now, with roller skating everything is different. In the covered roller-skating rink the exercise is at command in a pleasantly warm atmosphere, and nothing but the greatest carelessness can yield any injurious results in the way of catching cold. On the ice-covered lake also, the regular skating can be indulged in with an impunity from colds which is impossible in a covered rink where an ice surface is provided. For the great mass of the public, the park lakes afforded ample fields for skating, both in this city and in Brooklyn. Hitherto the Capitoline
Lake, in Brooklyn, and the Union Pond, in Williamsburgh, have been great family resorts for the skaters of those sections of the metropolis. But the Capitoline is no more, and until the Manhattan
Club enterprise started, we had no fashionable private skating lake at command in this city.

Looking at skating from a moral point of view, there are many excellent characteristics of the sport worthy of special commendation. It is very surprising to people who are thoughtless observers of
cause and effect in things about them, to see the general good humour which prevails on a well-ordered skating-lake. They cannot account for it. They do not see why skating should yield this peculiar result when kindred gatherings of people do not. The matter is easy of explanation. The philosophy of it is this: there is amoral medicine in the oxygenated air of a skating-lake which seems to purge the system of the ulcers and sores of ill-nature, uncharitableness, and bad temper, which so often break out in the public assemblages of city life. There is a wonderful power of exhilaration attendant upon breathing the pure oxygen of a winter atmosphere while engaged in so enjoyable a recreative exercise as skating; and one effect of this is to relieve us of those morbid affections resulting from a general neglect of healthy out-door exercise. Skating sends the blood to the
surface of the body in healthy circulation, and by rousing up the dormant functions of the skin, relieves the over-worked internal organs and gives new life and vigour to the general system. This naturally affects the mental power beneficially, and with the strong breath of restored health the ill-nature incident to a disordered body, and the bad feelings engendered by a neglected physique, disappear and are superseded by the natural good feelings of a healthy human being.

Sickly people - we do not mean actual invalids, but people who, by their neglect of proper exercise, bathing, and other essentials of health, are always indisposed - necessarily become sour-tempered and uncharitable. If you want to realize the truth of this theory, visit the park skating-lakes of New York or Brooklyn of a fine wintry afternoon, when good skating is at command, and watch the pleasant smile of the rosy-cheeked lass on skates, and listen to the gay laugh of the happy youth, and contrast these effects of the exercise with the pale countenance and serious manner of the over-housed girl, and the languid movements of the office-confined clerk, and you will then perceive what a gain it is to indulge in such healthy recreative exercise in the open air. The healthy condition of things above referred to, seems, too, to have an equal telling effect in developing the inherent honesty of man's nature. At any rate more honesty is found on a skating-pond than is found in other public assemblages. It is shown in this way: if a person picks up any lost article in a car or ferry-boat or on
the street, how rarely does it find its way to the lost owner! How does this work on a skating-pond? The answer is to be found in the innumerable instances of lost articles found on the ice being returned
to the office for the owners to call for. A sport which yields such healthy results as these, mentally and physically, is one to be heartily commended to family patronage.

The prominent cause of the delicate and sickly constitutions of the majority of our city ladies arises from their great neglect of outdoor exercise and recreation. Two-thirds of their lives are passed in the
artificial and poisonous atmosphere of their furnace-heated and poorly-ventilated apartments. The result is the prevention of that exhalation of carbon and inhalation of oxygen which are of such vital importance to the health of every human being. This requisite action of the lungs in the reception of the life-giving elements of the air we breathe; and the expulsion of the refuse carbon from the blood, is never better promoted than when the individual is engaged in the vigorous exercise of skating, and inhaling the oxygen of the pure, frosty air, at the same time bringing into activity every muscle of the body, thereby causing the blood to circulate healthily to the surface of the body, and giving life to the dormant functions of the skin.

Exercise, to be beneficial, should have the effect of increasing the insensible perspiration, for in the increase of the circulation of the blood to the surface of the body, and the consequent relief given to
the overworked functions of the lungs and bowels, lies the great benefit of exercise. It is from the lack of this circulation of the blood to the surface of the body that people unaccustomed to out door exercise take cold so readily. Those in whom the functions of the skin are in active play know not what a cold is, and hence the hardihood of those constantly in the open air and actively exercised, in comparison to those engaged in sedentary occupations, and who scarcely know what exercise is.

Skate Guard is a blog dedicated to preserving the rich, colourful and fascinating history of figure skating and archives hundreds of compelling features and interviews in a searchable format for readers worldwide. Though there never has been nor will there be a charge for access to these resources, you taking the time to 'like' on the blog's Facebook page at http://www.facebook.com/SkateGuard would be so very much appreciated. Already 'liking'? Consider sharing this feature for others via social media. It would make all the difference in the blog reaching a wider audience. Have a question or comment regarding anything you have read here or have a suggestion for a topic related to figure skating history you would like to see covered? I'd love to hear from you! Learn the many ways you can reach out at http://skateguard1.blogspot.ca/p/contact.html.
Posted by Skate Guard Blog at July 30, 2019
Email ThisBlogThis!Share to TwitterShare to FacebookShare to Pinterest
Newer Post Older Post Home