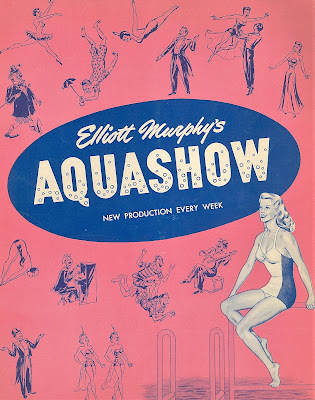 Presented in the giant New York State Marine Amphitheatre at the 1939 World's Fair, Billy Rose's Aquacade was the real deal. While Morton Downey warbled "Yours For A Song", audiences revelled at the 'aquabatics' of Johnny Weissmuller and Eleanor Holm, a light show and a cascading waterfall, all for eighty cents.


Willie, West and McGinty, three physical comedians who clowned around as carpenters on a raft in Rose's show, later joined the cast of Sonja Henie's Hollywood Ice Revue. Following in Rose's footsteps, impresario Elliot Murphy staged lavish aquashows at the Flushing venue throughout the forties, introducing musical, vaudeville and roller skating acts to the watery spectacles. 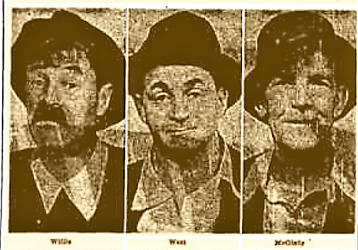 In 1953, the Roxy Theatre had a change in management. The venue had played host to a seemingly never ending series of ice shows, but when new management took over they opted to put the kibosh on the Lutzes and loops. Enter Elliott Murphy to save the summer. He had a 40 X 60 foot artificial ice rink installed in his Flushing venue, told his roller skaters to scram and signed on a small cast of ice skaters to perform as part of his aquashows, which by the fifties featured such recognizable names as Esther Williams, Cab Calloway and Duke Ellington. Each act in the two and a half hour show was announced with great fanfare by John McKnight. The June 23, 1954 issue of the "Long Island Star-Journal" noted, "The gay scenic backgrounds, designed by Albert Johnson, help nature set the mood and atmosphere." Now who wouldn't love a gay background? 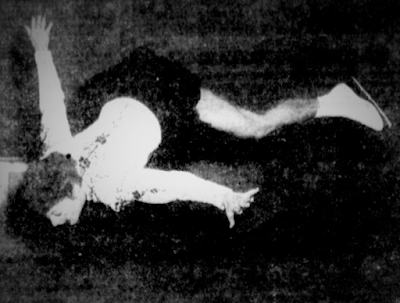 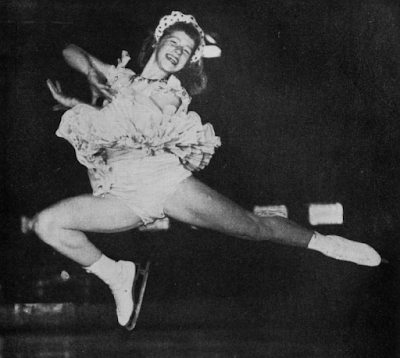 The skating cast in Elliott Murphy's aquashow included Evelyn Chandler, Andra McLaughlin Kelly, Bob and June Ballard, Johnny Melendez, Fred Hirschfeld, Tony LeMac, the eight woman Aquablade chorus and Jo Barnum Wallace, the great-grandniece of P.T. Barnum himself. The July 3, 1954 issue of "Billboard" magazine recalled, "Evelyn Chandler, who was the star of the ice show here last year, won the crowd with her agile and exciting skating. She projects all the time, and the audience loved her highland fling and her Arabian cartwheels... The Ballards, an adagio team, were effective with their pair skating number, showing some pretty lifts. Tony LeMac pulled a fair hand with his one-foot spins, his trademark. The Aquablades, however, demonstrated some cute footwork in some smart and flashy chorus routines that they sold stylishly." Though the Flushing aquashows continued well into the sixties, the ice skating component was axed within a couple of years. Oh well... it was a great summer job while it lasted!

Skate Guard is a blog dedicated to preserving the rich, colourful and fascinating history of figure skating and archives hundreds of compelling features and interviews in a searchable format for readers worldwide. Though there never has been nor will there be a charge for access to these resources, you taking the time to 'like' on the blog's Facebook page at http://www.facebook.com/SkateGuard would be so very much appreciated. Already 'liking'? Consider sharing this feature for others via social media. It would make all the difference in the blog reaching a wider audience. Have a question or comment regarding anything you have read here or have a suggestion for a topic related to figure skating history you would like to see covered? I'd love to hear from you! Learn the many ways you can reach out at http://skateguard1.blogspot.ca/p/contact.html.
Posted by Skate Guard Blog at August 01, 2019
Email ThisBlogThis!Share to TwitterShare to FacebookShare to Pinterest
Newer Post Older Post Home