Axels And Applause-O-Meters: The History Of Audience-Judged Figure Skating Competitions 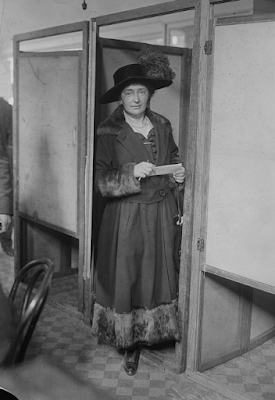 A woman celebrating a victory for the suffragettes - casting her vote in the first election where women could vote in New York City, 1918. Photo courtesy Library Of Congress.

Immersed in an age of figure skating competitions streamed live on the internet, YouTube videos, text messages, Twitter feeds and Facebook Live sessions, it is sometimes hard to imagine a time when audience members didn't have opportunities to instantly communicate their thoughts about a figure skating performance digitally. Sure, 'back in the day' you could boo the judges or even resort to pelting them with fruit - it's happened - but as a spectator prior to the age of social your voice as a spectator was in many ways more limited than it is today.

The first figure skating competition to allow audience members to cast votes took place at The Hippodrome in New York City after a matinee ice show on February 17, 1916. With more than two hundred and thirty votes more than the second place finisher Gerald Bowden, the winner was Arthur Held. New Haven's Walter W. Brewer finished third, followed by C.H.L. Veins and Adolf Windsperger. Votes were cast by ballot and the skaters were all professionals.

The idea of audience-judged skating competitions wouldn't be revived for over half a century. In the eighties, professional figure skating competitions like the World Professional Championships in Jaca, U.S. Open and the Pro-Skate tour of competitions began experimenting with including a 'public opinion' or 'audience' judge on their panels... either a local celebrity with no skating background offering a 'layman's' response to the performance they'd seen or a judge assigned to gauge the audience applause a skater received and mark accordingly. Like Krusty The Clown's Applause-O-Meter, these judging systems didn't always work out so well even though the concept was well-intentioned. 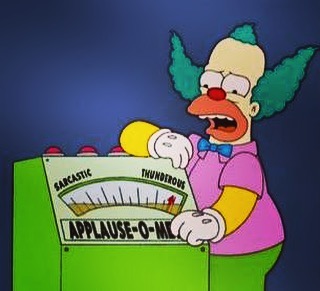 In the nineties following 'The Whack Heard Around The World', you sometimes couldn't turn on the television without having to decide which of two or three figure skating events broadcast simultaenously to watch and which to record for later. During this great boom of professional figure competitions, the producers of two events considered how directly involving audience members in the competitions they were watching would make them more invested.

The first televised figure skating competition to be judged solely by an in-house audience was the Trophée Lalique d'Or held on November 20, 1994 at the Palais Omnisports de Paris-Bercy Stadium in Paris, France and broadcast on Eurosport. Sandra Garde and Anita Hartshorn and Frank Sweiding - skaters who'd never won medals at the World Championships or Winter Olympics - took home some serious prize money as winners. However, the concept of an audience-judged competition would take another year and a half to reach North American audiences.


Cord and Kirk Pereira of Diamond Sports & Entertainment, based in Boise, Idaho, pitched the idea of an entirely audience-judged figure skating competition to the good folks at CBS. The network executives ate it right up and on May 7, 1996, The Great Skate Debate was held at the Brown County Veteran's Arena in Green Bay, Wisconsin. Four thousand, two hundred and fifty three spectators attended the competition, where seven men and seven women performed one competitive program. Using computerized devices, the audience in Green Bay had forty five seconds after each performance to input scores from 9.0 to 10.0 for each skater.


Yuka Sato, Denise Biellmann and Katarina Witt claimed the top three spots in the women's event and Scott Hamilton, Kurt Browning and Paul Wylie were the top three in the men's. Kirk Pereira told "Amusement Business" magazine, "The idea is that all the skaters are world class and none of them are deserving of anything below a 9. The beauty of the concept is it becomes a personal decision. The true skating fan understands from a technical standpoint and sends a message of appreciation. But it also has a certain popularity component to it. That is the whole idea. Subjectivity has its place and application in any sport. This focuses on the audience and how they feel. That and the interactivity are the critical factors - bringing that subjectivity into the editorial content of the program itself."  In the May 9, 1996 issue of the "Times Colonist", Bill Leighton remarked, "Katarina Witt, [Nancy] Kerrigan and [Yuka] Sato were among many of the skaters who signed autographs for fans on their way off the ice. Hamilton hammed it up during a showy Vegas number that included back flips, costume changes and a pair of pants that lit up. People waved signs proclaiming: 'We're Hot For Scott'. Young girls yelled out, 'We love you Joe' to the long-haired Jozef Sabovčík. But like any good debate, there was a difference of opinions. Occasionally, the crowd even booed its own judging."

Broadcast live on ZDF in December of 1996, Rowenta Masters auf dem Eis in Frankfurt, Germany utilized a judging system similar to The Great Skate Debate. Three men, women, pairs and dance teams performed one competitive program and received scores out of 10.0 from a panel of three judges, headed by European Champion Norbert Schramm. Following the judging panel's marks, voting was opened to the in-house audience.... a concept was familiar to viewers of ZDF's popular game show "Wetten, dass..?", where audience voting had been used since 1987.  The audience marks were converted from percentages to points. If a skater received forty five percent of the audience vote, an additional 4.5 points was added to their score from the judging panel. As winners, Susanna Rahkamo and Petri Kokko, Elena Bechke and Denis Petrov, Denise Biellmann and Jozef Sabovčík split the lion's share of the eight hundred thousand mark prize money. In case you're wondering, that's over six hundred and thirteen thousand dollars in Canadian currency today... hardly chump change!

The Great Skate Debate returned as The Great Skate Debate II on March 27, 1998 on University of Illinois-Chicago Pavilion after partnering with TWI, the television 'arm' of IMG. This time, eight women and six men participated and the innovation of online voting was introduced for the first time in history. Five thousand in-house seats were still wired with handheld computers for voting on a scale of 8.0 to 10,0, but viewers at home could input scores in real time via an Excite search engine server.


Prior to the competition, in-house spectators were quizzed on their skating knowledge so that the commentators could break down the scoring of "novices, fans and die-hards". Kristi Yamaguchi, Ekaterina Gordeeva and Rory Flack Burghart claimed the top three spots in the women's event. Scott Hamilton repeated as the men's champion, again besting Paul Wylie and Kurt Browning. Sadly, by this point in history the popularity of professional figure skating competitions was already starting to wane. Despite receiving favourable reviews and boasting some great skating, The Great Skate Debate II earned lower Nielsen ratings than the same evening's broadcasts of "Kids Say The Darndest Things" and "Candid Camera".


In the years that have followed, USFSA pro-am competitions, the Improv Ice Show/Championships presented by Disson Skating, CBC's Battle Of The Blades, ITV's Dancing On Ice, NBC's Skating With Celebrities, ABC's Skating With The Stars, PSA's Virtual Skate Off and the Young Artists Showcase have all allowed audiences the chance to participate in the process of judging figure skating.

Most recently, the ISU Skating Awards were launched and a Russian skater named Anton Shulepov wearing a tacky and offensive Holocaust-themed outfit was nominated for Best Costume. When the ISU got called out for the nomination on social media, they responded with a tweet stating, "The ISU regrets that by error the wrong costume (Free Skating instead of Short Program costume) of Mr. Shulepov has been presented for voting. This error has been corrected and the ISU sincerely apologizes for this mistake and the bad sentiments it has caused." The tone-deaf PR fail made headlines in "Time" and "People" magazine and led many to question the nomination process. After all, Shulepov's short program costume at the NHK Trophy was a rather forgettable turtleneck and pants. Of the thousands of skating costumes worn so far this season, we were to believe the turtleneck was apparently haute couture.


What role audience judging will have in the figure skating's future remains to be seen... but I think we can all agree its history is certainly interesting.

Skate Guard is a blog dedicated to preserving the rich, colourful and fascinating history of figure skating and archives hundreds of compelling features and interviews in a searchable format for readers worldwide. Though there never has been nor will there be a charge for access to these resources, you taking the time to 'like' on the blog's Facebook page at http://www.facebook.com/SkateGuard would be so very much appreciated. Already 'liking'? Consider sharing this feature for others via social media. It would make all the difference in the blog reaching a wider audience. Have a question or comment regarding anything you have read here or have a suggestion for a topic related to figure skating history you would like to see covered? I'd love to hear from you! Learn the many ways you can reach out at http://skateguard1.blogspot.ca/p/contact.html.
Posted by Skate Guard Blog at December 03, 2019
Email ThisBlogThis!Share to TwitterShare to FacebookShare to Pinterest
Newer Post Older Post Home