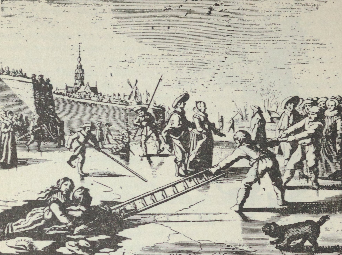 Many of the nostalgic images we see on holiday cards today may seem like a quaint ode to the type of festive holiday that no longer exists. Popcorn garlands and wassailing have gone the way of the dodo instead of the turtle dove, much like the popular tradition of a Christmas morning skate on a glistening frozen pond.

In the days leading up to Christmas in 1935, the weather was unusually cold and foggy in Great Britain and ice formed on many ponds and streams, making outdoor skating possible. However, in just forty eight hours, tragedy struck four times on the ice... making for a grim Christmas for many.

In the town of Sunbury, sixteen year old Richard Basil Ross of Green Lanes was skating on the ice that covered an abandoned gravel pit near his home on December 23, 1935 when the ice broke and he was propelled into the water that filled the pit. Rescuers were hampered from coming to his assistance by thick fog and by the time they reached the young man he had drowned. That same day at Store Row, Seaton Burn in northeast England, eleven year old Robert Allen and his nine year old brother Joseph suffered a similar fate while skating on a pond near their village. While skating alone over a patch of thin ice, they fell through and drowned together in the pond's icy depths.

The third skating tragedy that occurred on December 23, 1935 happened during an ice carnival at Loch Leven, Kinross, Scotland. About fifty yards from the shore, on a patch of the ice that had been skated over hundreds of times that day by carnival goers, thirty five year old Daniel M'Pherson, an unemployed man from Kinross, and sixteen year old Alexander Fyfe, a Dollar schoolboy and M'Pherson's nephew, were plunged into the lake's chilly waters. The first to hear their cries was twenty one year old James Brady of Swansacre, Kinross. He dashed to the area of the ice where M'Pherson and Fyfe had fallen through to help when there was another ominous crack. He too was plunged into the water.

Rescuers formed a human chain to attempt to aid the three drowning men. As they warily crossed the ice, thirty seven year old George Harkness of High Street, Kinross, who was at the head of the chain, vanished into the water. The next skater in the chain, Alexander Marshall, grasped him but the ice broke again and he was also submerged. Marshall's life was saved by the third link in the chain, a seventeen year old Dollar woman the historical record only recalls as Miss Locke. She grasped his hand and along with the assistance of the fourth skater in the chain, William Tod, hauled him out of the water and on to safe ice. By this time, residents in nearby houses lined the banks of Loch Leven with lifebelts and ladders but it was apparent that M'Pherson, Fyfe, Brady and Harkness had all perished. Kinross residents arrived with motor car batteries and head lamps, flashlamps and storm lanterns to search for the men's bodies by boat. The bodies of Brady and Harkness were recovered just after eleven that night. M'Pherson and Fyfe's bodies were recovered early on Christmas Eve morning. The latter were identified by a police report made by their family, who had reported that they never returned from the skating carnival. In the December 24, 1935 issue of "The Glasgow Herald", an unnamed rescuer praised the heroic efforts of Miss Locke thusly: "She is an expert skater and took her place pluckily at the tail of the human chain, and digging the point of her racing skates into the ice she thus took most of the strain." The Scottish Skating Association met the following day and discussed cancelling the One-Mile Open Amateur Championship of Scotland, a speed skating race planned that day, in light of the tragedy. Ultimately, the decision was made to carry on with the event in light of the fact it was a national event. Donations were accepted for the families of the four men who lost their lives through the Loch Leven Ice Fatality Fund, organized by a local provost. Over two hundred and seventy five pounds were raised.

The fourth such tragedy - though not technically not a skating one - occurred on Christmas Eve on Rudyard Lake, a reservoir in Staffordshire. The victims were Douglas Rutter and Arthur Nirks, a pair of affable twenty somethings from the coal-mining town of Hanley. The Boxing Day issue of "The Scotsman" reported, "Nirks and Rutter, with two other men, had a small bungalow on the shore of the lake. They spent a lot of time in the locality, and the four of them made arrangements to stay there during Christmas week. It was intended to have a traditional Christmas dinner, and the bungalow had been decorated with seasonal bunting. Nirks and Rutter left the bungalow for a walk. Rudyard Lake was frozen but, though they had attempted earlier in the day to skate, they had discovered that the surface was not strong enough to bear them. When they did not return in time for supper, their two companions became alarmed. Though they made an intensive search, they could find no trace of either Nirks or Rutter. The police were informed, but in the darkness it was impossible to ascertain what had happened. In the morning the police made an examination of the ice-bound surface of the lake. On it they discovered two separate sets of footprints. These were followed for a considerable distance. Then, at an aperture in the ice, about eight feet in diameter, the footprints stopped. It is presumed that the two men had been sliding on the lake and had ventured a distance from shore to discover how far the ice would bear. The part on which they had been standing appears to have given way under their weight... The tragedy has marred the Christmas festivities here as the two men had been coming about the district for some time. They were very popular." 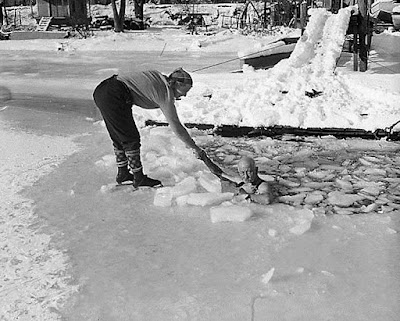 The moral of all of these very, very sad stories? At Christmas or at any time of the year, if you're brave enough to go skate outdoors on a frozen lake or pond - safety first! Tell someone where you're going, be absolutely sure the ice is at least ten centimetres thick and if in doubt, sit that skate out.

Skate Guard is a blog dedicated to preserving the rich, colourful and fascinating history of figure skating and archives hundreds of compelling features and interviews in a searchable format for readers worldwide. Though there never has been nor will there be a charge for access to these resources, you taking the time to 'like' on the blog's Facebook page at http://www.facebook.com/SkateGuard would be so very much appreciated. Already 'liking'? Consider sharing this feature for others via social media. It would make all the difference in the blog reaching a wider audience. Have a question or comment regarding anything you have read here or have a suggestion for a topic related to figure skating history you would like to see covered? I'd love to hear from you! Learn the many ways you can reach out at http://skateguard1.blogspot.ca/p/contact.html.
Posted by Skate Guard Blog at December 17, 2019
Email ThisBlogThis!Share to TwitterShare to FacebookShare to Pinterest
Newer Post Older Post Home