Flemings In The Fens: How Pattens Came To England 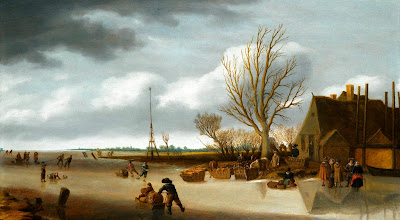 Early chronicles of how iron skates and figure skating first arrived in Great Britain tend to focus heavily on accounts from Samuel Pepys' diaries and the British royals exiled in Holland who taught the English Country Dance to Dutch women in exchange for skating lessons. However, little credit is given to another group who greatly influenced the development of skating in England during the same era... the Flemish and French protestants who fled en masse to the British Isles to escape religious persecution from the Catholics.

In the seventeenth century, refugee Protestants from Lille, Turcoing, Sainghin and the French Walloons arrived in England in droves. Many worked alongside Dutch settlers draining fens and building dykes in the East Anglia region which is now comprised of Norfolk, Suffolk and Cambridgeshire counties. It is believed that on the frozen fens in that part of the country, these refugees may have exposed many Brits to the joys of skating. In his 1959 book "Ice-Skating: A History", skating historian Nigel Brown noted, "When in 1625 Charles I engaged the great Dutch engineer, Cornelius Vermuyden, to drain the Isle of Axholme and various parts of the Eastern Counties he appears to have employed French and Flemish workmen, who would have known of skating although they may not have practiced it in England. That the word 'pattens', meaning a pair of skates, was used in the Fen district up until nearly the end of the nineteenth century indicates very conclusively that skating was introduced by French and Flemish refugees. The point, however, which is important is that the type of society which did bring it to the waterlogged area was that of workmen or artisans whose skating activities would be confined to its utility as a form of locomotion, and where pleasure and fun entered, to speed." Interestingly, up until the twentieth century it was in 'the fen country' that speed skating flourished while in the higher class areas of England, figure skating dominated.

Nigel Brown's assertion that the term 'pattens', a derivative of 'patiner' and 'patin' (the French verb for 'to skate' and the noun for 'skate'), was used well up until the end of the nineteenth century in 'the fen country' is certainly verifiable with primary sources. In his 1892 book "Skating", John Moyer Heathcote remarked, "Passing through Whittlesea in December of last year (1890), I observed an advertisement displayed by an enterprising but imperfectly educated mechanic of that town announcing, 'Pattons grond here!'" 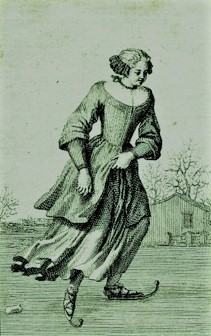 What's quite interesting is the fact that at the same time skates were being referred to as 'pattens' in East Anglia by the descendants of those seventeenth century French and Flemish refugees, the rest of Victorian England was embracing a practical invention of the same name. 'Pattens' were a metal platform that were nailed to shoes that allowed the well-to-do to traverse filthy city streets without getting their feet covered in mud, horse droppings and the steady stream of human sewage from chamber pots that was often ankle deep.

In the late nineteenth century, British skating judge and historian George Herbert Fowler noted the regional nature of the term 'patten' and hypothesized further as to how it came to be used in Cornwall:
"The Fenmen of to-day still use 'patten' for 'skate' all over the eastern counties; beyond their boundaries I have only heard the word once, namely, in Cornwall, where my friend, Mr. [Edgar] Syers, gleaned the delightful phrase, 'skittering on pattens.' As a skating frost is a great rarity in Cornwall, the word is not likely to be indigenous, and may have been brought by the east coast fishermen, who frequent Cornish harbours in great numbers." 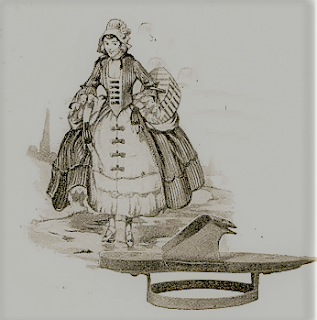 Cuthbert Bede, writing in "The Leisure Hour" in 1876, acknowledged that the term 'pattens' had more than even those two meanings and was also used to describe shoes worn in Turkish baths and the base of a wooden foot-stall or partition. He wrote, "But if, in France, a skate is called patin, it is called patten in East Anglia. The fen-men of Lincolnshire and Huntingdonshire, even at the present day, when Whittlesea Mere and many fens exist but in name, invariably speak of their skates as 'pattens'. A fen-man would seem to be born a skater, and to ask for his pattens as naturally as he would cry for his first food. If the little boys in Pekin are adepts in skating, the fen-boys of England can rival them; and although a fen-woman may not often skate to market with her poultry and butter poised on her head, a fen-man has frequently done so, just as if he had been 'to the manner born' in Rotterdam, Antwerp, Dordrecht, Haarlem, Utrecht or Moerdyk, instead of bearing reared within sight of the spires, towers, and 'stump' of Whittlesea, Ely, Crowland, Wisbeach or Boston." 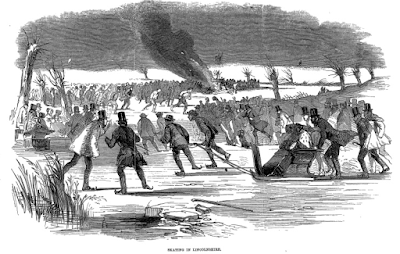 Had it not been for those Flemish and French refugees who fled the religious persecution, the many 'pattens' wouldn't have woven their way into the pattern of England's skating history... and many everyday people wouldn't likely have been exposed to a popular pastime of the well-to-do as early as they were.

Skate Guard is a blog dedicated to preserving the rich, colourful and fascinating history of figure skating and archives hundreds of compelling features and interviews in a searchable format for readers worldwide. Though there never has been nor will there be a charge for access to these resources, you taking the time to 'like' on the blog's Facebook page at http://www.facebook.com/SkateGuard would be so very much appreciated. Already 'liking'? Consider sharing this feature for others via social media. It would make all the difference in the blog reaching a wider audience. Have a question or comment regarding anything you have read here or have a suggestion for a topic related to figure skating history you would like to see covered? I'd love to hear from you! Learn the many ways you can reach out at http://skateguard1.blogspot.ca/p/contact.html.
Posted by Skate Guard Blog at February 06, 2020
Email ThisBlogThis!Share to TwitterShare to FacebookShare to Pinterest
Newer Post Older Post Home