In modern day, when someone says, "I'm going to Nationals" we safely assume they are heading to one venue for a several day figure skating competition featuring multiple disciplines. However, if the year was 1937 and you lived in Great Britain and told someone the exact same thing, you could have been talking about one of any number of events! Today on the blog, we'll take a trip back in time to pre-World War II England for a look at the many British Championships of 1937. 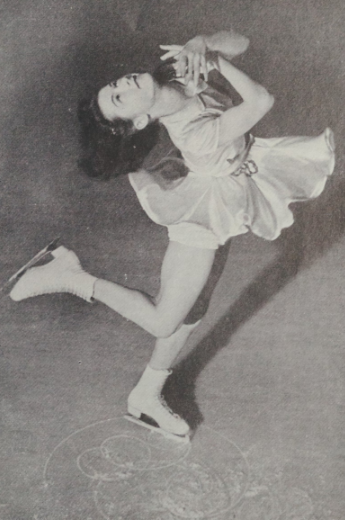 In early February of 1937, the National Skating Association presented the first 'Junior Competition For Ladies', which was open to young women over the age of twelve who had not competed in the British Championships prior to October 1, 1936. In his book "Skaters' Cavalcade: Fifty Years Of Skating", author A.C. Wade explained, "This competition was frequently referred to as the British Junior Championship, and although this definition was incorrect the contest was regarded by many as for the Junior title. The first winner was Miss Beryl Styles, who, not long afterwards became a professional, and was the star in the very successful ice revue 'Marina' which ran for many months at Brighton and later at Earl's Court. While at Earl's Court the Queen saw 'Marina' and Beryl was presented to her Majesty." 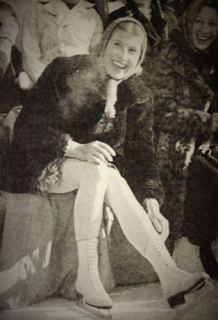 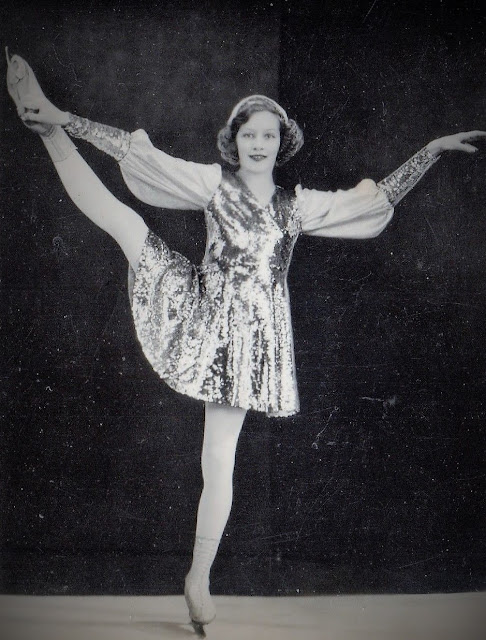 
On February 16 and 17, 1937, the British Ladies Championships were held at the Westminster Ice Rink. After the compulsory figures, Park Lane's Cecilia Colledge held a twenty three point lead over Manchester's Megan Taylor. The February 16, 1937 issue of "The Western Morning News And Daily Gazette" noted, "Miss Colledge, at sixteen, was one of the oldest of the nine competitors who for eight hours circled gracefully on the ice in six set figures and skated with each foot in turn." The youngest entry in the event was thirteen year old Daphne Walker, whom the London County Council made wait until after midnight to be 'seen by the judges' in the previous year's competition. This was owing to the Young Children and Persons Act, which forbade young people to give public exhibitions after seven in the evening, unless it was for charity. At Westminster she told reporters, "I felt tired occasionally, but it was the waiting between the figures which fatigued me."

Some in the audience believed that Megan Taylor might overtake Cecilia Colledge in the free skate. The February 17, 1937 issue of "The Aberdeen Press And Journal" reported, "Miss Colledge's skate grated ominously as she pirouetted into a simple spin, and the spectators held their breath, but [she] recovered and went on to perform an intricate series of spins and jumps - a programme which won her the title for the third year in succession." Taylor settled for silver, ahead of Streatham's Gladys Jagger, Jacques Gerschwiler's protégé Belita Jepson-Turner, Daphne Walker, Pamela Stephany, Joy Ricketts, Jean Leonard-Smith and Beryl Styles. 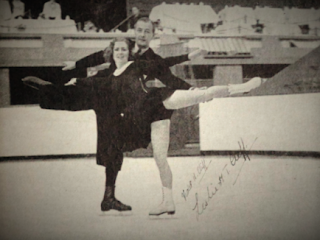 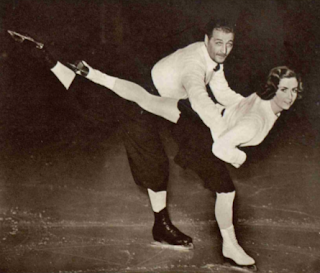 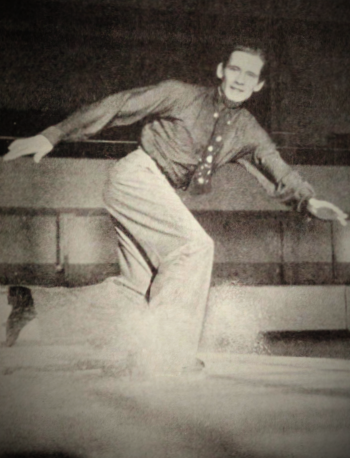 On March 14 and 15, 1937, the British Men's Championship was held at Harringay Arena. Fresh off a silver medal win at the World Championships in Vienna, Henry Graham Sharp skated to a commanding lead in the school figures. Though Freddie Tomlins won the free skate, Sharp's early lead was enough for him to easily retain his title. The skating correspondent for "The Times" remarked, "I find it hard to understand why the judges could make such a great difference between the holder's skating and that of his nearest rival, F. Tomlins, who skated very steadily and with true lines and in excellent style." 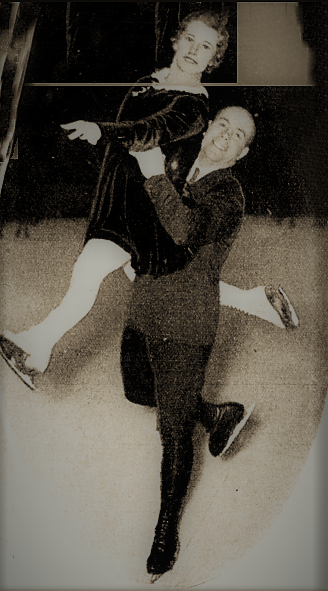 
The following month, the British Open Professional Championships for men, women and pairs were held at Harringay Arena. In the women's event, eighteen year old Pamela Prior was victorious in her first appearance in the event. She was actually the only entry but was still expected to obtain at least two thirds of the maximum marks for compulsory figures (yes, figures in a professional event) and seven twelfths of the maximum marks in free skating to be awarded the Championship. She earned 956.7 points out of a possible 1250. London born Hope Braine reclaimed the men's title ahead of ahead of one Herr Rolle from Germany. Four teams contested the pairs title, where Australians Sadie Cambridge and Albert Enders defeated two time Olympic Gold Medallists and four time World Champions Andrée and Pierre Brunet by one tenth of a point. 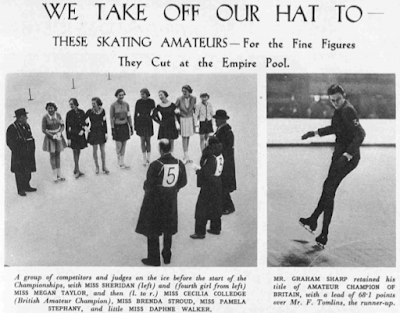 On December 12 and 13, the National Skating Association decided to finally consolidate the British Men's, Ladies and Pairs Championships into one event at one venue, the Empire Pool, Wembley. One of the reasons often cited for this decision is the fact that audiences would flock to see the women's competitions and rarely turn up in the same numbers for the men's or pairs events. A.C. Wade noted, "This meeting proved an immense success, about 10,000 people being present, and many turned away." The Cliff's repeated as pairs champions and Daphne Walker won the bronze medal behind Cecilia Colledge and Megan Taylor, but actually beat Megan in the free skate and reportedly received more applause than either of her older competitors. The men's event was far closer than the one held that March, with Sharp's margin of victory over Tomlins depleted significantly. On his "Saturday Page", Godfrey Winn offered us a rare glimpse into the men's event and the relationship between Sharp and Tomlins: "Graham Sharp sailed on to the ice to give his exhibition of free skating. But, good though he is, the enthusiasm in the crowd is twice as great for the boy who follows, and in the five minutes allotted to him, courts disaster a dozen times by the daring of his leaps and turns. There is a roar as he makes his exit. I look at the programme excitedly. Freddie Tomlins. The name is new to me. Perhaps to you, too. Remember it. He is going to be the champion one day. Afterwards I went behind the scene and met this comet in the skating world. On the final figures of the judges he was placed second to Sharp by a very small margin. You might have expected him to be disappointed. You might have expected a feeling of tenseness between the two close rivals, the assured champion and the youngster stepping on his heels. But not a bit of it. Sharp and Tomlins talked to me with their arms around each other's shoulders. 'If he could do figure skating like I can, and I could put up his show at free-skating, we'd win the World Championship between us,' Sharp explains. 'Anyway, we're off to Berlin next month, aren't we Tommy, to see what we can do!' Tommy grins. He is shy. All his articulation lies in his feet. But all the same it easy for me to see that there is not a scrap of jealousy in his nature. He has done is best, he has been beaten at the post by a better man. He acknowledges the other's superiority and thereby gains new laurels for himself. Some people would have gone home blaming the judges, picking holes in their rival's perfection. In short, they would have spoiled the thought of having held a prize at all by the vain envy of the man or woman who topped the poll."

The next time you bemoan the expense and time off work involved in attending one National Championships a year, be thankful that you didn't have to attend seven!

Skate Guard is a blog dedicated to preserving the rich, colourful and fascinating history of figure skating and archives hundreds of compelling features and interviews in a searchable format for readers worldwide. Though there never has been nor will there be a charge for access to these resources, you taking the time to 'like' on the blog's Facebook page at http://www.facebook.com/SkateGuard would be so very much appreciated. Already 'liking'? Consider sharing this feature for others via social media. It would make all the difference in the blog reaching a wider audience. Have a question or comment regarding anything you have read here or have a suggestion for a topic related to figure skating history you would like to see covered? I'd love to hear from you! Learn the many ways you can reach out at http://skateguard1.blogspot.ca/p/contact.html.
Posted by Skate Guard Blog at February 11, 2020
Email ThisBlogThis!Share to TwitterShare to FacebookShare to Pinterest
Newer Post Older Post Home