It's once again time to unpack the mail bag, answer some of your questions and share some of the interesting e-mails and social media messages that have come my way over the last few months. I'm going to try to do this quarterly from now on so things don't pile up. As always, if you have a question you'd like me to tackle or feedback on a blog please reach out via e-mail.

Before we get started, I'd like to talk to you about a couple of new things you'll find on Skate Guard. Firstly - over the past few months, I've been sharing dozens upon dozens of 'new to you' videos on YouTube. They are organized into playlists - Essential Eighties, Nostalgic Nineties and others. If you're looking for videos of a particular skater, just pop their name in the search bar and see what you can find. Secondly - if you go to the top bar on the blog's main page, you'll find the new Collections page. This is a catalogue of all of the books, magazines, photographs, etc. in my personal collection. The reason I've chosen to share this is so that you have an idea of what kind of tools I have at my disposal. If you're looking for articles about a certain skater for a paper you're writing or are doing genealogical work and trying to learn more about that famous skater in your family tree, I'm always happy to help. I'd finally like to sincerely thank the many, many readers who have donated to these collections - without your generosity this blog wouldn't even be possible!

From Amber (via e-mail): "I have a question I'm hoping you can answer. When did they start giving out the pewter medal at U.S. Nationals and why don't they give it out at Olympics and Worlds?"

A: Really great question, Amber! As far as I know, the U.S. is the only country that has ever given out a pewter medal or included the fourth place finisher in its medal ceremonies. Back in the day (we're talking the thirties) it wasn't uncommon for skaters to be given small participation medals at international competitions by the event's organizers and even small gifts sometimes... but nothing like the pewter medal. I couldn't pinpoint exactly when the USFSA started doing this so I reached out to Karen Cover at the U.S. Figure Skating Hall Of Fame. She knew it was at least as far back as 1990 when Nicole Bobek finished fourth in the junior women's event. I traced it back a little farther though. If you watch ABC's coverage of the medal ceremony at the 1988 U.S. Championships in Denver, you see Jeri Campbell standing just off the podium with a medal around her neck... presumably the pewter. Pictures of the medal podiums from 1985 and 1986 Nationals don't show a fourth skater so it's possible (?) that this tradition started in 1987 or 1988.

From Shannon (via e-mail): "Thank you for everything that you do! I really enjoy reading about skaters from the 1970's and 80's in particular. I was always upset that Brian Orser didn't win the Olympic gold medal because of the compulsory figures. Were there other skaters who missed out on gold because of the figures?"

A: Thanks for the excellent question, Shannon and I'm glad you're enjoying the blog! The short answer is yes... and quite a few. The most obvious answer is Janet Lynn in Sapporo in 1972, but there are a ton of others. That same year, Sergei Chetverukhin would have won the gold in the men's event and become the first Russian man to win an Olympic gold since Nikolay Panin-Kolomenkin back in 1908. The free skate winners in the women's events at the 1980 and 1988 Olympics were Denise Biellmann and Liz Manley. Emmerich Danzer would have won the men's in 1968 and Ronnie Robertson would have won in 1956. Ginny Baxter would have won the women's in 1952. The men's champion in 1924 would have been Willy Böckl and the women's champion in 1920 would have been Theresa Weld Blanchard. Finally, at the first Olympic figure skating event in 1908, Richard Johansson would have defeated Ulrich Salchow. Speaking of Salchow, what's perhaps most interesting is the fact that he would have only won four World titles instead of ten had it not been for the figures. Gilbert Fuchs, Max Bohatsch and Werner Rittberger would have each beaten him not once, but twice.

From Janet (via e-mail): "I have just read your article on James. I am taking advantage of the increased time at home these days to get on with straightening out my family history.  I have grown up always being aware of the Drake Digbys in Cambridge, and just randomly found your article via Facebook. I know about Uncle Sam, and William (my great grandfather) but James was previously just a name on the tree... My mother (James great niece) was born in 1915 and brought up in London. From her early teenage years she was a frequenter of the Queen's Ice Skating rink in London.  I had assumed it was just something everyone did, like ballet classes and learning the piano. Perhaps not, and now I shall never know. She retained lumps on her head from falls on the ice throughout her life, but the falls didn't put her off!... Thank you for the article, it has been excellent for me to see parallels with his brothers and to find out so much more." 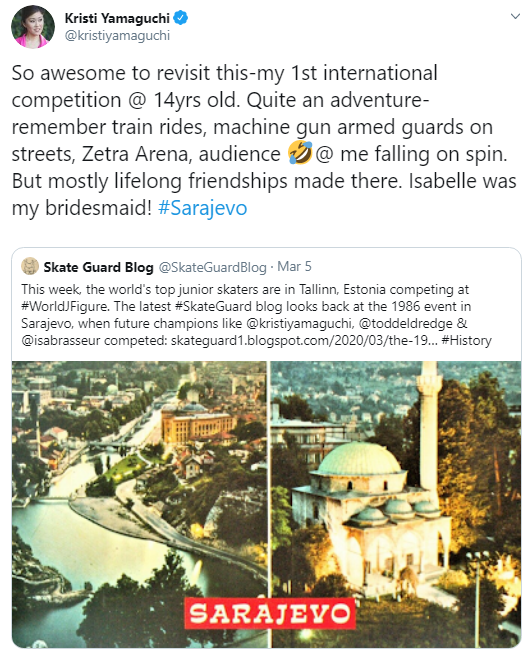 From Margaret (via Facebook): "This is really interesting to me as my husband and I and about six English skaters toured East Germany with the Circus Aeros in 1957. It was a small ice show with the circus. We toured with the circus for about nine months. What an experience that was. One place we played was near Buchenwald and we visited that terrible place, the circus people laid a wreath as it was, I think, the anniversary of the end of the war and the release of the survivors. One experience among many."

THE SKINNY ON TIGHTS

From Kalonji (via e-mail): "I have came across an early photo of Anna Galmarini in the 1958 European Championships. One thing I have noticed in the photo that I have been searching for in the longest time was she was wearing over-the-boot tights in that particular photo. That could mean she was the first official figure skater to don opaque over-the-boot tights in the sport. And I believe the second figure skater to wear that style was Jinx Clark in 1959 when she did a stint on Holiday On Ice. She wore it in a form of a fishnet." 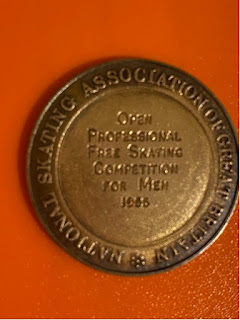 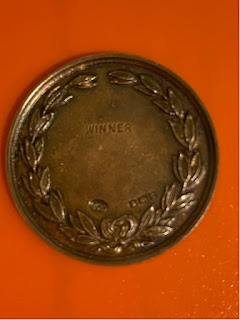 From Doug Chapman (via e-mail): "1955 Professional competition is incorrect. The competition was actually held in Nottingham, England.

Not sure why complete results are unavailable? It was an Open Competition for free skating. I was coached by Megan Taylor 2 time World Champion."

From Anna Pataky (via e-mail): "You wrote a lovely tribute to my father, Ryan, and I am most grateful to you for sharing his story with such a wide audience of skating enthusiasts. My father would have been very moved and humbled. I wish also that my brother could have lived long enough to read it, but for the rest of the 'Pataky's' the article leaves a legacy of courage and accomplishment that we will always be proud of."


Skate Guard is a blog dedicated to preserving the rich, colourful and fascinating history of figure skating and archives hundreds of compelling features and interviews in a searchable format for readers worldwide. Though there never has been nor will there be a charge for access to these resources, you taking the time to 'like' on the blog's Facebook page at http://www.facebook.com/SkateGuard would be so very much appreciated. Already 'liking'? Consider sharing this feature for others via social media. It would make all the difference in the blog reaching a wider audience. Have a question or comment regarding anything you have read here or have a suggestion for a topic related to figure skating history you would like to see covered? I'd love to hear from you! Learn the many ways you can reach out at http://skateguard1.blogspot.ca/p/contact.html.
Posted by Skate Guard Blog at April 02, 2020
Email ThisBlogThis!Share to TwitterShare to FacebookShare to Pinterest
Newer Post Older Post Home