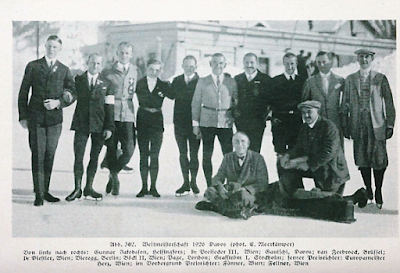 In early 1926, the Rhine River overflowed, causing fifty thousand residents of Cologne, Germany to be evacuated by the military and the airline Deutsche Luft Hansa (a forerunner of Lufthansa) was founded in Berlin. On February 13 and 14 of that year, the German city also played host to the 1926 World Figure Skating Championships in men's and pairs skating. The competitions were held at the Berliner Eispalast in conjunction with the Berlin Eisfest, which also included contests in speed skating and a grand hockey tournament which pitted teams from the Wiener Eislaufverein in Vienna and the Berliner Schlittschuhclub. The women's competition was held separately on February 7 and 8 on outdoor ice in Stockholm, Sweden and marked the twenty year anniversary the first ISU women's championship in 1906, won by Great Britain's Madge Syers.

One of the most interesting footnotes about the 1926 World Championships is the fact the ISU requested proposals for a possible ice dance competition to be held in conjunction with the Berlin event. Dr. Hugo Wintzer, an ISU judge from Dresden, proposed a waltzing contest and "prescribed set dance skated by each couple separately" judged on "a) novelty and originality (to be rated first), variety and difficulty (to be rated second) - in sum, the technical worth. b) Grace, appearance and carriage - the execution (ie. how beautiful?) and c. Unity of execution, rhythm, sureness - the execution - ie. how well?" Dr. Wintzer's proposal was translated and appeared in the February 1926 issue of "Skating" magazine but primary source materials offer few clues as to whether or not an unofficial ice dancing competition actually occurred. If it did, it was obviously unofficial, but it would have marked one of the earliest instances of any sort of waltzing or ice dancing competition being held in conjunction with the World Championships. 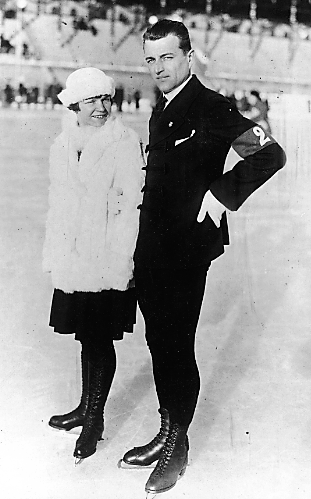 Without a doubt, the women's competition in Stockholm was the most dramatic. Four time and reigning World Champion Herma Szabo arrived in Sweden with her engineer husband Paul Jarosz only to find that Papa Henie had been busy politicking for his young daughter Sonja, who had placed fifth in her first trip to the World Championships two years prior and not participated the year prior. She had originally expected her chief competition to come from Elisabeth Böckel, who had placed third at 1925 World Championships and the sudden publicity 'push' for Henie came as something of a revelation to the Viennese skater. In the school figures, Szabo, Henie and Great Britain's Kathleen Shaw were unanimously first, second and third on every judge's scorecard. In the free skate, the Austrian judge placed Szabo first, the Norwegian judge placed Henie first and the judges from Germany, Sweden and Finland tied the two. Overall, Szabo and Henie were unanimously first and second on every judge's scorecard. With four third place ordinals, Shaw took the bronze. The only judge not to place her third was Hugo Metzner of Germany, who gave that distinction to Elisabeth Böckel. Even though the Swedish newspaper "Dagens Nyheter" raved that Szabo was "in a class by herself", the fact that she was able to retain her title that year was a miracle in itself.  The February 13, 1926 issue of the "Illustriertes (Österreichisches) Sportblatt" noted, "Overnight from Sunday to Monday Herma's skates were in the cloakroom of the sports field. They were damaged by an unknown hand in an act of obvious malicious intent and rendered useless. The hope that Herma would leave the competition was not fulfilled for the perpetrator, for the four-time World Champion procured new skates and won her fifth, and certainly not last, World Championship." A January 28, 1994 article from "The New York Times" later recalled the hoopla thusly: "At the world championships in Stockholm, someone apparently tried to sabotage [Szabo's] performance by deliberately slicing her skating boots, 'She was putting on her skates and she noticed that someone had cut around the boot; the sole was nearly coming off,' [Fritzi Burger-]Russell said Planck-Szabo told her. 'They postponed the beginning of compulsory figures until the boot could be repaired. Planck-Szabo had her suspicions - she thought she saw a member of the Norwegian delegation in the corridor as she returned to her hotel room the night before the competition - but nothing was ever proved..." 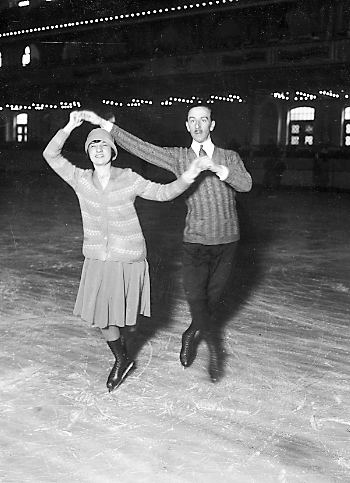 The Brunet's in Berlin. Photo courtesy National Archives of Poland.

Though Herma Szabo had managed to pull off a miracle in Stockholm, her luck ran out in Berlin. With Ludwig Wrede, she had won the World pairs title the year prior in front of a hometown audience in Vienna. In 1926, Szabo and Wrede dropped to third behind Andreé (Joly) and Pierre Brunet of France and Lilly Scholz and Otto Kaiser. 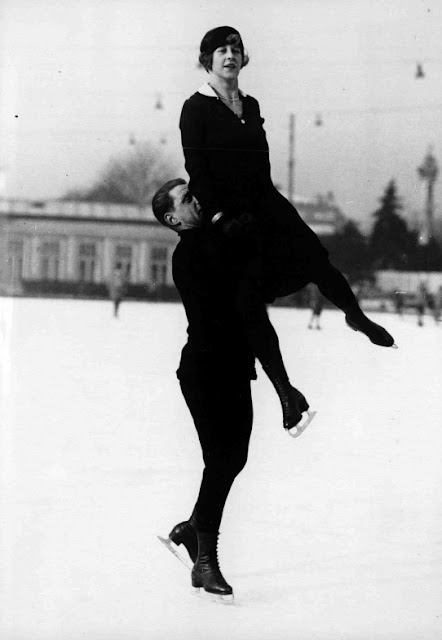 The Norwegian and Austrian judges had Sonja Henie and Arne Lie, who placed fifth, in first... quite interesting considering what happened in Stockholm and the notorious politicking of the day. The judging of the pairs event in Berlin was somewhat all over the place. Henie and Lie's ordinals ranged from first through ninth and Gisela Hochhaltinger and Georg Pamperl of Austria, who placed fourth, had ordinals ranging from second through eighth. Four first place ordinals were enough for the Brunet's to take the gold... making them the first French skaters in history to win a World title. 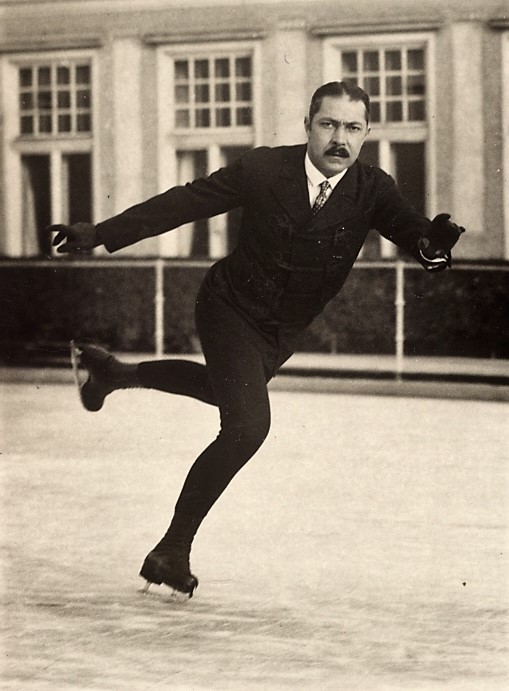 Prior to the men's event, rumours swirled that two time Olympic Gold Medallist Gillis Grafström and Olympic Bronze Medallist Georges Gautschi would participate. Neither ultimately surfaced, leaving nine men to compete for the title. Four out of five judges had defending World Champion Willy Böckl first in the figures, though the German judge somewhat scandalously had Werner Rittberger first on his scorecard. No other judge had Rittberger higher than fourth. In the free skate, Böckl received first place ordinals from the British and French judges but Finnish judge Walter Jakobsson had him as low as sixth. Jakobsson voted for young Robert van Zeebroeck of Belgium. Austrian judge Fritz Kachler had Dr. Otto Preißecker first and the German judge again voted for Rittberger. Overall, Böckl had three first place ordinals, Otto Preißecker one and Rittberger one. 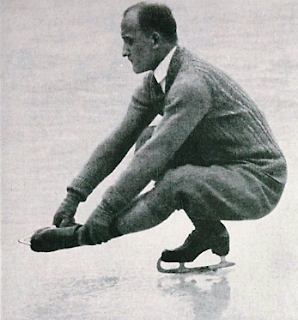 By three ordinal placings, Willy Böckl won, with Otto Preißecker second, John 'Jack' Ferguson Page third and Werner Rittberger fourth. Robert van Zeebroeck remained in seventh, exactly where he'd finished in the school figures. Though the numbers show that Böckl's win was far from unanimous, the February 20, 1926 issue of the "Illustriertes (Österreichisches) Sportblatt" claimed that he "won [so] convincingly that the proclamation of the result [caused] no sensation." It seems 'fake news' was even a thing back in the roaring twenties.

Skate Guard is a blog dedicated to preserving the rich, colourful and fascinating history of figure skating and archives hundreds of compelling features and interviews in a searchable format for readers worldwide. Though there never has been nor will there be a charge for access to these resources, you taking the time to 'like' on the blog's Facebook page at http://www.facebook.com/SkateGuard would be so very much appreciated. Already 'liking'? Consider sharing this feature for others via social media. It would make all the difference in the blog reaching a wider audience. Have a question or comment regarding anything you have read here or have a suggestion for a topic related to figure skating history you would like to see covered? I'd love to hear from you! Learn the many ways you can reach out at http://skateguard1.blogspot.ca/p/contact.html.
Posted by Skate Guard Blog at April 28, 2020
Email ThisBlogThis!Share to TwitterShare to FacebookShare to Pinterest
Newer Post Older Post Home