The History And Evolution Of Side-By-Side Jumps 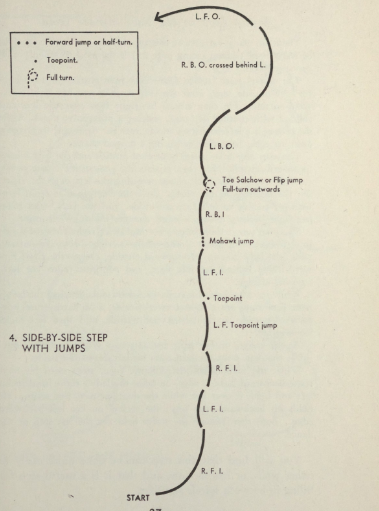 Thanks to reader 'MER' for requesting today's topic... a history of side-by-side jumps! Whether you're consulting dusty old books like me or asking Siri, chances are you're more than familiar with the history and evolution of figure skating jumps. From Dick Button's double Axel to Donald Jackson's triple Lutz, the history of jumping 'firsts' has been much discussed and documented. However, when it comes to the history and evolution of side-by-side jumps in pairs skating, comparatively little has been written.


The majority of pairs free skating programs prior to the roaring twenties consisted solely of dance steps, field figures and spins.1908 Olympic Gold Medallists Anna Hübler and Heinrich Burger pushed those boundaries with a small assisted three jump in their program. However, Burger cautioned, "Due consideration should be given the fact that pirouettes and jumps impair the rhythm. Whoever can succeed in skating this kind of figure to the music, however, may rightly claim that his pair-skating should score high, on the difficulty of it." Side-by-side jumping rose was first popularized during the era of the Charleston, when attitudes about the validity of shadow skating began to change . Footage exists of American Beatrix Loughran and Sherwin Badger performing side-by-side single jumps at the 1928 Winter Olympic Games in St. Moritz.

During the twenties and thirties side-by-side Axels were far from common, but they weren't non-existent. Since Gustave Lussi had taught both Constance and Bud Wilson the Axel, it has been suggested that he talented Canadians may have been the first or one of the first pairs to perform side-by-side Axels.  The 1936 Olympic Gold Medallists Maxi Herber and Ernst Baier usually only attempted solo flips, loops and waltz jumps, but on more than one occasion they did attempt Axels. A similar pair from Canada, the Caley Sisters, also mastered the one-and-a half revolution jump. Maribel Vinson and George 'Geddy' Hill 'only' went for side-by-side Lutzes in their program at the 1936 Olympics. Vinson stressed the importance of side-by-side jumps being performed as close together as possible, but advised, "When Guy [Owen] and I were making the Grantland Rice technique film 'Good Skates', we did a side-by-side flip jump so close that we crashed in mid-air - and that I do not advocate! However, anything less than a crash is all to the good, and if you and your partner can't pull your jumps off without a wide space between you, you had better leave them out until you acquire the knack - or the courage." 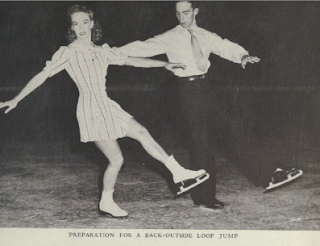 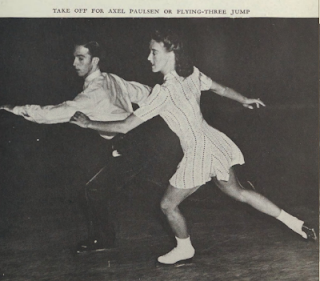 Prior to and during World War II, side-by-side jumps were often featured in combination with combinations of dance steps and not as 'standalone' feature elements. When asked if a pair should include solo jumps in their performance in 1943, U.S. Champion Doris Schubach responded, "If the two skaters find that they jump from the same foot and that their styles are similar, then they should include a few in their program. Do not forget, however, that you are not exhibiting your ability as single skaters, but rather as two people skating as one. Do not let your program appear as if it could just as easily be skated by one person as by two." 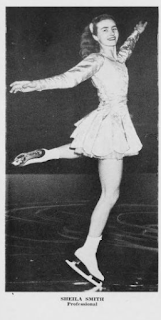 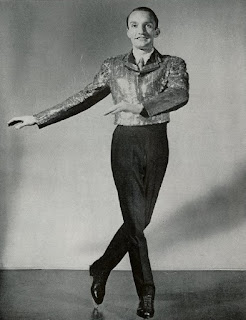 An overlooked duo who pushed the boundaries during wartime were Sheila and Ross Smith, the 1944 Canadian Champions the junior pairs category. A profile in the March 1944 issue of "Skating" magazine noted, "They skate from the Winnipeg Winter Club and both are primarily singles skaters, which fact gave them no difficulty in including back loop jumps, Lutzes and Axels, and even a camel spin in their pair program." Imagine! A camel spin too. That's just fancy!

In their 1943 book "Pair Skating And Dancing On Ice", Rosemary (Stewart) and Bob Dench described side-by-side jumps as being "used advantageously to add variety to... shadow skating." Their book described side-by-side jumps up to the Axel being performed as well as side-by-side jumps performed "hand-in-hand" which were "sometimes [used] for turning corners as [they save] unnecessary running around and [are] a good way to gain speed." These 'hand-in-hand' side-by-side jumps were usually nothing more than a flying three or mohawk jump. Teams also performed 'passing' jumps which weren't side-by-side but were performed in unison. Maribel Vinson Owen recalled, "Norah McCarthy and Ralph McCreath jumped in a small separating figure and held their landing into a controlled meeting... Joan Tozzer and Bernard Fox did Salchow jumps past each other, a particularly rhythmic move, as the sway of their bodies as they approached on the rather long preparation was interesting and the dip for the jump was timed so that they passed each other actually in the air." An unusual trend during World War II were pairs that performed entirely different jumps side-by-side. On this matter, Rosemary Stewart and Bob Dench's book suggested, "Too much side-by-side work - skating as two separate individuals - is frowned upon by the judges... It is not necessary that you both do the same jumps at the same time. If you find that each of you do a certain jump better than the other, then by all means combine the two different jumps. For example, the lady may do a split while the man does a Lutz, and the combination is a very effective one."

Though side-by-side jumps had been included in pairs programs for decades by the early sixties, they were still considered a novelty - not a standard or 'expected' element. Debbi Wilkes recalled, "Back in those days side-by-side jumps were not key elements in a pair program. I think the most we ever did was maybe a double Salchow. What we did were all the technical pair elements." That said, there were certainly a handful of teams that pushed the envelope in this area. Two of the first teams to attempt solo double Axels were Nina and Stanislav Zhuk and Maria and Otto Jelinek. The Zhuk's were unsuccessful on their attempt at the 1960 European Championships and Olympics; the Jelinek's also faltered at the 1962 World Championships. The athleticism of these teams prompted other pairs to try more difficult double jumps. In 1962, Dorothyann Nelson and Pieter Kollen and Milada Kubíková and Jaroslav Votruba both successfully performed double flips. Nelson and Kollen's double flips were side-by-side but were very intentionally not in unison, whereas the Jelinek's attempted the double Axel in unison, but not side-by-side.


By the late sixties, the standard among the top pairs teams in the world was to include more than one side-by-side double jump in a free skating program. These were still usually just Salchows, toe-loops or loops. After all, when the compulsory short program was introduced for pairs in 1964, the only required side-by-side jumps were the Axel and double Salchow. Soviets Tamara Moskvina and Alexei Mishin, Americans Barbara Brown and Doug Berndt and East Germans Manuela Groß and Uwe Kagelmann pushed the limit with side-by-side double Lutzes. Russian sources claim that at the 1969 European Championships in Garmisch-Partenkirchen, Irina Rodnina and Alexei Ulanov became the first team to successfully land side-by-side double Axels. However, a report of the event in "Skating" magazine only makes mention of them including "two remarkable quadruple combination jumps: Axel/toe-loop/half loop/double Salchow, and then split jump/toe-loop/half loop/double Salchow." A report from the 1972 Olympic Games noted that the only pair to land side-by-side double Axels were Americans Melissa and Mark Militano.

Soviets Marina Cherkasova and Sergei Shakrai made history when they landed side-by-side triple toe-loops at the 1978 European Championships in Strasbourg, but missed their attempts at landing the groundbreaking element at both the 1978 and 1979 World Championships, then abandoned the element entirely.

Though other teams sporadically attempted high risk side-by-side jumps in the early eighties, it was really the Soviet powerhouse pairs - Valova and Vasiliev, Gordeeva and Grinkov and their teammates Larisa Selezneva and Oleg Makarov - who consistently upped the ante for difficulty during that era, setting the standard of needing at least a side-by-side double Axel to be competitive. Giving a sense of the technical evolution of side-by-side jumps during this period in their 1987 book "Pair Skating As Sport And Art", Tamara Moskvina and Igor Moskvin noted, "In 1972 no program had a double Axel jump or a triple jump. In 1987 every [free] program had either a double Axel jump or a triple jump."


Canada's Meagan Duhamel made history at the 2005 Canadian Championships in London, Ontario, performing the first side-by-side triple Lutz in competition with her partner Ryan Arnold. Quoted in the "Sudbury Star" on March 28, 2005, Duhamel remarked, "We didn't think it was going to end up being such a big deal. We knew the World Champions and the American Champions had been trying it for years. Ryan and I never looked at it as 'we're going to be the first ones'. We just both knew we were able to do it in singles, so we thought, 'why not use it?' It has become a great advantage for us." Side-by-side triple Lutzes became the trademark of Meagan Duhamel and Eric Radford, whose mastery of the jumps set them far apart from the pack and helped them win Olympic medals and World titles.


Will more side-by-side jumping history be made in the years to come? We'll just have to see what the future holds.

Skate Guard is a blog dedicated to preserving the rich, colourful and fascinating history of figure skating and archives hundreds of compelling features and interviews in a searchable format for readers worldwide. Though there never has been nor will there be a charge for access to these resources, you taking the time to 'like' on the blog's Facebook page at http://www.facebook.com/SkateGuard would be so very much appreciated. Already 'liking'? Consider sharing this feature for others via social media. It would make all the difference in the blog reaching a wider audience. Have a question or comment regarding anything you have read here or have a suggestion for a topic related to figure skating history you would like to see covered? I'd love to hear from you! Learn the many ways you can reach out at http://skateguard1.blogspot.ca/p/contact.html.
Posted by Skate Guard Blog at May 14, 2020
Email ThisBlogThis!Share to TwitterShare to FacebookShare to Pinterest
Newer Post Older Post Home