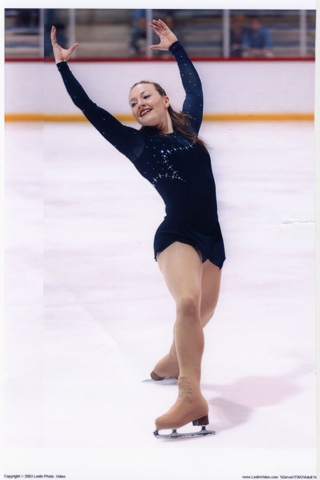 Allison Manley's Manleywoman Skatecast is one of the most popular skating podcasts going. If there's a skating star out there, she has interviewed them. I had the chance to turn the tables and interview the interviewer and find out what Allison had to say about her involvement in the sport, her favorite interviews and more!

Q: What would you change about the way skating is judged to improve it?

A: A few things, but one would be to allow for at least one spin that is just a beautiful spin, without having to hit a million positions to get points. I miss a good classic position.

Q: What skater or skaters have inspired you the most?

A: So many I can't list. But one who sticks out in my mind would surprise most people: Stephanie Rosenthal. I just LOVED that she could take her fairly-limited jumping ability and still wow the crowds at US Nationals in 2006 for both her short and long program with well-constructed programs using unusual music choices, and projecting sheer joy. It really showed me the power of making the most with what you have. So few skaters could have pulled off what she did. I watch her short program often.

Q: What is your personal background in the sport and what do you feel was your greatest moment or accomplishment in skating?

A: I started skating because I was born with a hip disorder, and the doctors told my parents to sign me up to some sport that would keep me active as I grew. They tried ballet, and I was a nightmare to the teachers apparently. So then someone said to my parents, "don't you know there's a world-class skating center just down the road from you? Some young hotshot named Scott Hamilton trains there." They signed me up for lessons soon after. I took a few years off in my twenties, but have been skating and competing as an adult for quite a while now. Greatest accomplishment? I'd have to say it's The Manleywoman Skatecast. I never imagined something I started as a hobby six years ago would have evolved as it has and allowed me to meet the people I've met. I got invited to Dick Button's house last year! What normal fan gets to do that unless they have won an Olympic medal or bought dinner with Dick at an auction? That certainly was one hell of a moment for me.

Q: Who has been the favorite skater you interviewed so far? The most difficult to interview?

A: I can't pick a favourite. There have been so many. Honestly, I'd say that I've loved pretty much every interview I've done for different reasons. There is one that I really didn't like, but I'll keep that one to myself.

Q: What would be your first order of business if you were in charge of the International Skating Union?

A: To put David Kirby in charge to replace me. I think the man is a genius. He knows skating inside and out at a cellular level: as a coach, as owner/manager of a rink, as a technical specialist, as an administrator, and as an implementer of new ideas (i.e.: SkateRadio). Plus he's charming and funny, good qualities to have as a leader. I think if Kirby had the reins, he'd know exactly what to do.

Q: What's one thing you love the most about being on the ice?

A: The freedom... freedom to work on myself, freedom of movement, and at times, freedom from reality!

Q: Who's the one skater you'd love to meet/interview but haven't yet?

A: Anyone who listens to my podcast knows I'm a huge Dick Button fan. He's the interview I most wish to have, since he IS skating history. He invented so many of the moves, was the first skating commentator... What a pioneer! As for one that I would have loved to have interviewed as well and will never be able to: Christopher Bowman. What an interview that would have been, to get an hour of him describing he perspective on the sport.

Skate Guard is a blog dedicated to preserving the rich, colourful and fascinating history of figure skating and archives hundreds of compelling features and interviews in a searchable format for readers worldwide. Though there never has been nor will there be a charge for access to these resources, you taking the time to 'like' on the blog's Facebook page at http://www.facebook.com/SkateGuard would be so very much appreciated. Already 'liking'? Consider sharing this feature for others via social media. It would make all the difference in the blog reaching a wider audience. Have a question or comment regarding anything you have read here or have a suggestion for a topic related to figure skating history you would like to see covered? I'd love to hear from you! Learn the many ways you can reach out at http://skateguard1.blogspot.ca/p/contact.html.
Posted by Skate Guard Blog at March 01, 2013
Email ThisBlogThis!Share to TwitterShare to FacebookShare to Pinterest
Newer Post Older Post Home