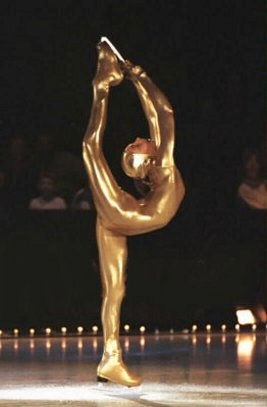 A spinning virtuoso, Lucinda Ruh is the whirling dervish of figure skating, making skating history by making the Guinness Book Of World Records for her spinning ability, but her beautiful artistry and presence certainly matched her spinning talent equally. A 2 time Swiss National Champion, Lucinda competed at 5 World Championships, earned a bronze medal at Skate Canada and finished third at the World Professional Championships, beating huge names like Surya Bonaly and Oksana Baiul. She also toured with Stars On Ice! Now married and the mother of twins, Lucinda lives in the United States and it was my pleasure to have the opportunity to interview her about her life, her skating and her thoughts on the current state of figure skating.

Q: I've got to start with an obvious question I'm sure you've been asked so many times, you're probably sick to death of answering it. You are one of the best spinners the world has ever seen. Denise Biellmann, Nathalie Krieg and Stephane Lambiel are all exquisite spinners as well. Is there something in the water in Switzerland the rest of the world doesn't know about?

A: I am the best spinner in the world in history because I am the longest spinner being in the Guinness Book of Records and also the fastest clocking at six revolutions a minute which is three hundred and sixty rotations per minute! I  also am the one who created most of the spin positions being done now and many that skaters still cannot replicate. You see many of mine, especially my famous pancake spin which I think needs to be called the Lucinda spin! Unfortunately I wouldn't be able to say it is anything Swiss as I was only born there and I rather grew up in France, Japan, China, Canada and the United States. However if you count Swiss DNA, then maybe that it is. 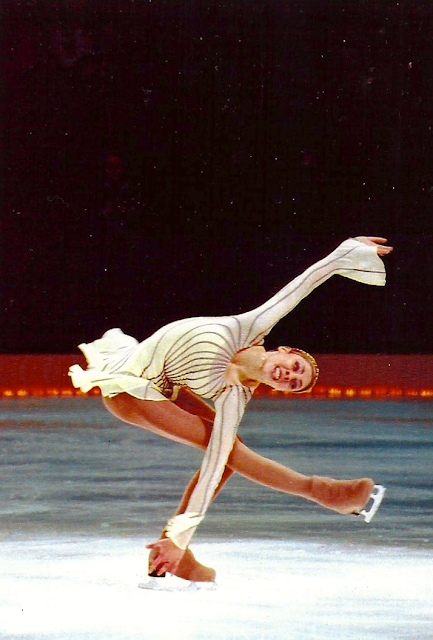 Q: Who do you think is the best spinner skating today?

A: I am not trying to sound arrogant but I do not think anyone in particular is spinning very well at the moment. No one is being innovative but rather just copying my positions as they are trying to get levels. I don't blame them as there is so much to work to be done on the ice and so many levels to achieve to get ahead in the rankings. This new system, which although the spin part was sparked because of me as they were trying to make a system that would award them, in contrary is just making spins look quite distasteful. Tragically with this system they are trying to put everyone in the same box where spinning and flexibility is not going to be everyone's positive point. Let each skater be an individual! That's where you are going to see the talent emerge. That is why in the old days you had such artists and creative personalities on the ice. Now, no more. You see one skater one competition, and gone the next. Skaters are completely loosing their identity in the midst of practicing day in and day out with only getting points and levels as their motive.

A: My favourite memory of my skating career is the World Championships in 1999 in Helsinki. I was confident, in my element, injury free and loving to skate. Although it is said I should have been placed higher, placements mean little in the big scheme of life and I just remember the wonderful skates I performed and standing ovations I received.


Q: What was working with Toller Cranston like? He has to be one of the biggest geniuses the sport has ever seen - just saying.

A: Working with Toller Cranston was an education and honour to say the least. I have a whole chapter on it in my book which will bring you to tears and laughter at the same time! Although I cannot sum him nor my experience with him up in a nutshell as they are both larger than life I can say I am eternally grateful to have worked so close with such an enigmatic artist. He is forever my friend. 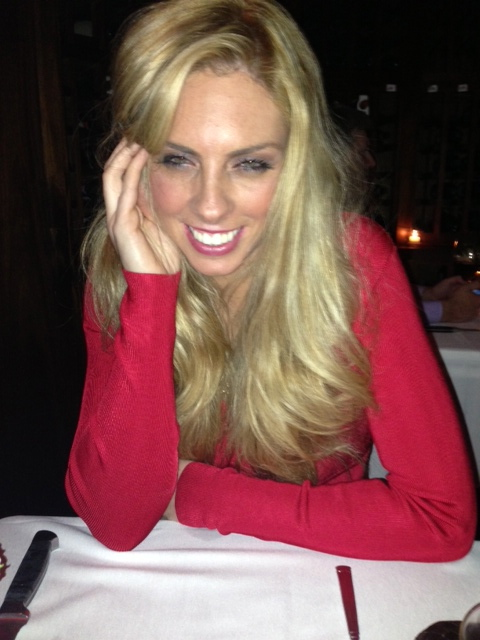 Q: You're now a mother! Congratulations! How has your life changed since becoming a mother and what is the funniest experience you've had so far as a parent?

A: Thank you! I am a mother... two for one! Twins have been such a blessing and more so such a surprise! I am loving every minute even amidst the busy schedule. The funniest experience so far has been when I thought both my twins somehow where covered with chocolate when I realized it was poo! From head to toe none the less. I also always play a baby Einstein CD and they will take the CD out of the CD player and hide it under the carpet! I guess they don't like that music anymore! At least they were loving it! But I must say every second being with them is the joy of my life.

Q: In addition to being one of my favourite skaters, you also got to compete with some of my other favourites... Laetitia Hubert, Tanja Szewczenko, Marie-Pierre Leray, Olga Markova... Who was the nicest person you ever competed against? The most competitive?

A: The nicest person I ever competed against was Irina Slutskaya. The most competitive, Tara Lipinski. 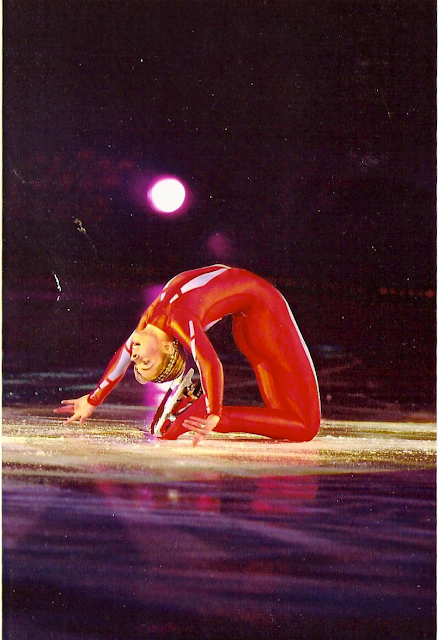 Q: Who is your favourite skater to watch?

A: My favourite skater to watch was actually a pair team.. Ekaterina Gordeeva and Sergei Grinkov. Growing up I watched them day and night. I have yet to see a pair team come close to their beauty, grace and unison.


Q: Your Alanis Morissette program at the World Professional Championships years ago was a complete masterpiece. Where did you get the idea and concept for this program and who choreographed it?

A: Thank you! My Alanis Morissette program was one of my favourites too! It was my meditation program. Since when I was young I loved to just be in my own world I wanted a program I could escape to, so this was the time I could and actually skate at the same time. To me I was trying to show the sufferings and healing of the world coming together as one and becoming a meditation for the world. The magnificent Robin Cousins choreographed it with my final touch. :)

Q: What do you think could be improved with the new judging system? Do you miss the 6.0 system?

A: I do not like this new judging system in more ways than I can describe. It's not interesting or beneficial for the coach nor the skater nor the viewer. There is now even more space and secrecy for the judges to manoeuvre points around and manipulate results. More injuries and more stress for the skater. I miss the old 6.0 system in that it let the skater be who she or he is. Not making a mapped out plan of how each skater should look like, be and should do. It has become so cookie cutter that even when a skater enters a spin you almost know exactly what spin they will do to get their levels. When they enter footwork, same thing. It is all looking quite monotonous and therefore skating has lost it's audience.

Q: What was your favourite and least favourite jump?

A: My favourite jump was triple Lutz when I was doing it, and triple toe. My least favourite was triple Salchow. 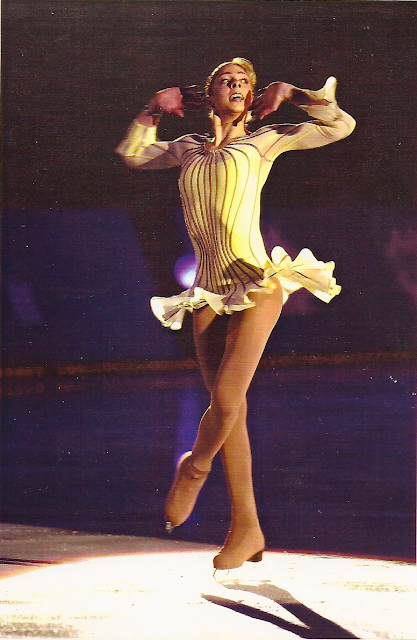 Q: Not only a brilliant skater, you are also a gifted dancer, musician and are fluent in more languages than I thought existed! If you pursue skating, what other passion would you most have liked to pursue at the time?

A: I definitely wanted to be a scientist.

A: Professional skating was really in place because it was for skaters who then could make money or receive gifts for their performances. Now Professional skating has lost it's charm and motive because any skater can receive monetary prizes. I think like all other sports if you are competing at the World level you should be called a Professional. I actually wanted to come back for the 2002 Olympics but unfortunately was not allowed at that time. The Olympics is the one competition that has eluded me due to political reasons from Switzerland and so I had wanted one more shot at it. 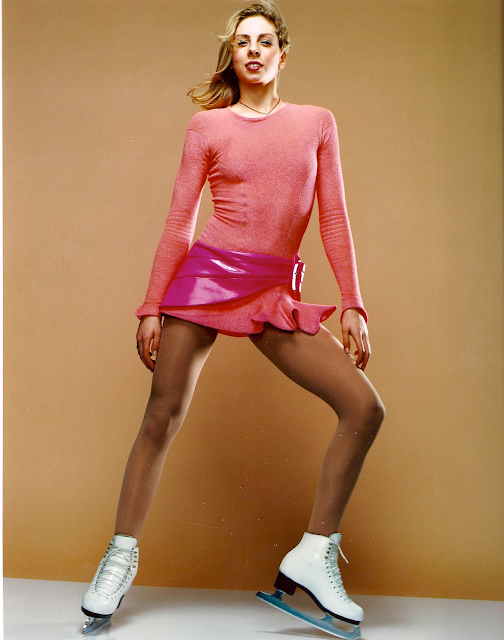 Q: What's your favourite song and why?

A: "Con te Partiro" is my favourite song because it is the song of my husband and I. The meaning of it, "With you I live", is so beautiful.


Q: When all is said and done, when you look back on your experience as a competitive skater, how you do you think it has shaped the person you are today?

A: My skating journey has made me who I am today. No doubt about it. It has shaped and formed me with how I think, with how I react and how I live my everyday. It has given me incredibly discipline, drive, and determination to really achieve anything I set my mind to. I notice, compared to non athletes my level of intensity when I do do something is so much higher due to the training I had been under from a very young age. It always was that it had to be done then and there. There was no second chance. I have to admit it can drive my husband crazy at times and then I need to remember I am not on the ice! I am not being judged and critiqued to the ninth degree. I am okay just being me and I don't have to do everything and have everything right now. But you know, skating is a very lonely sport, especially if you are a singles skater, and it is also such an intense sport. I think with gymnastics it is the most difficult sport out there and if you do not want it now, and want to train so very hard, and want to not be with friends and have sleepovers then its just not for you. There are so many great twelve year old skaters out there and yet so few eighteen year olds. So little survive this sport and even fewer make an impact on the sport. So I can only be profoundly appreciative of this sport and even more than what I have given it, for what it has given me and my family.

Skate Guard is a blog dedicated to preserving the rich, colourful and fascinating history of figure skating and archives hundreds of compelling features and interviews in a searchable format for readers worldwide. Though there never has been nor will there be a charge for access to these resources, you taking the time to 'like' on the blog's Facebook page at http://www.facebook.com/SkateGuard would be so very much appreciated. Already 'liking'? Consider sharing this feature for others via social media. It would make all the difference in the blog reaching a wider audience. Have a question or comment regarding anything you have read here or have a suggestion for a topic related to figure skating history you would like to see covered? I'd love to hear from you! Learn the many ways you can reach out at http://skateguard1.blogspot.ca/p/contact.html.
Posted by Skate Guard Blog at March 12, 2013
Email ThisBlogThis!Share to TwitterShare to FacebookShare to Pinterest
Newer Post Older Post Home