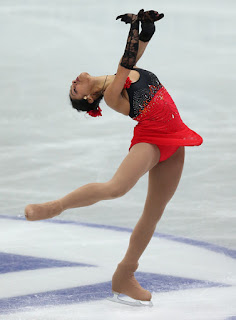 With countries like Russia, Canada, the United States, France and Japan dominating figure skating for so long, it's easy to forget that figure skating is very much a worldwide sport. Skaters from the last countries you would expect are represented in competition and come from recognized ISU federations in countries like Grenada, Argentina and New Zealand. A relatively "new kid on the block" is India, and Ami Parekh made history by becoming the first skater to represent India at an ISU Championships. This ground breaking skater has fought through injury to continue her career in the sport and it was my pleasure to have the opportunity to interview her and learn more about her career, skating in India, her education and her goals for the 2013/2014 season, which she has stated will probably be her last one:

Q: You were born in New Jersey and started your career skating within the United States but moved on to represent India. What made you decide to make this change?

A: I won Regionals in the U.S. twice, competed in U.S. Junior Nationals (top 7 one year) and Eastern Sectionals. Then, India became a provisional ISU member. Figure skating and India are completely new to each other, and my family is from India. I felt I was capable of bringing my favorite Olympic sport to India and vice versa. I really hope to be the one to bring India to the Olympic figure skating scene.

Q: In representing India at the 2007 World Figure Skating Championships, you made history by being the first skater to represent India at an ISU Championships. What did that experience of competing at the World Championships mean to you? How did it differ from your second trip, in 2012?

A: I had received a lot of attention at the 2007 World Championships because it was India's debut at a Senior Worlds and there were a lot of awesome Japanese figure skating fans! This was also my second Senior championships ever, and the first time I had to compete in a lot of pain due to a new injury that I would have to often manage. So that was a challenge in itself, and so far I've been succeeding. I was thrilled to experience what the World Figure Skating Championships were all about--all the best in skaters in the world and all the world skating fans in one ice arena. To meet and see all of them skating live, and to skate on the same ice as they did was amazing. In 2012, I had matured as a skater and I was not as nervous because I knew what to expect. Also India's participation at Worlds was not as much of a surprise to the skating community. Finally, there had been major judging system rules changes since 2006, so it was interesting to prepare for and watch others prepare. It was really cool to see many new faces as well as a couple of old ones - and they hadn't aged one bit!

Q: What can you tell us about the skating scene in India?

A: Skating has been around for quite some time in India, though it was either in the form of roller sports or at a recreational level. I think there are several reasons why India may be interested in competitive ice skating. First it is an Olympic sport unlike roller skating. Also, there are many pretty, natural ice rinks up north, and there could be plenty of opportunities to build skating rinks where the climate is colder and more temperate. Finally, in the hotter parts of the country, who wouldn't want to be on the ice as long as there was a way to efficiently build and maintain the rink? In addition to the above, I think there is so much Indian art, culture and talent that could shine on the ice and the world could enjoy it too! With a solid means and support system in India all people could learn skating at any level. Maybe one day all the top figure skaters in the world could go to India for major international competitions just like they currently can go to many other countries. They would get to experience the country and vice versa! However before any of this can happen, a wide scale recognition and dedication to the sport in the India would be necessary. When I went to India to perform and teach seminars in 2010, skating programs seemed a bit more developed than when I last visited the skating scene in 2004-2006. More ice rinks have been built in more cities, and many have rental skates for figure skaters. Unfortunately, there is a lack of qualified figure skating coaches and judges in the country. Also the hotter parts of the country are figuring out an energy efficient way to keep the small rinks running smoothly all year round.

Q: Do you do all of your training in the U.S. or do you train there as well? Does India have a National Championships or is their selection process different?

A: Yes, I have lived and trained in the U.S. for most of my skating career. There are solid skating programs here. People from all over the world come to the U.S. to train because of its top coaches and skaters. From the times I participated and won the Indian National Championships in 2004-2006 until now (2010-2013), things have changed in India. Now, the Indian Ice Skating Assoication does not require me to participate as frequently (it's almost as if I get a bye).

Q: What skaters do you most look up to (past or present)?

A: There are SO many amazing skaters out there, even the ones that are not well-known. Everyone brings something great to the ice! Michelle Kwan, Xue Shen and Hongbo Zhao, Philippe Candeloro, Tanith Belbin and Ben Agosto, and Akiko Suzuki are some of my favorite well-known skaters.

Q: What do you enjoy doing with your time outside of skating?

A: I enjoy dancing, working out, and studying outside of skating. I graduated University of Pennsylvania with a degree is neuroscience and am figuring out what I will do next once I'm completely finished with competitive skating (probably at the end of this upcoming season). So far, I am very interested in sports and rehab medicine. I am also interested in teaching skating in my free time and tutoring kids in basic science, english, and math. Most of all I like to chat and hang out with friends and to meet new people!

Q: What are your goals for next season? Have you already started working on new programs?

A: I just finished rehabbing an injury since January and things are looking great. My biggest goal is to to get the triple flip and triple lutz into my programs and to complete clean programs more often. I aim to keep learning and improving at a fast rate, however, I would need some kind of sponsorship to pay for coaching and training. I would like to participate in the Olympic pre qualifiers this September 2013 as well as the World and Four Continents Figure Skating Championships in February and March 2014. And, of course, it's the exciting Winter Olympic season! So hopefully, I can qualify to represent India in the February 2014 Winter Olympics too.

Q: When you look back at your years in skating, what do you love most about the sport? What makes you enjoy being on the ice every day you train?

A: I was and have always been a big fan of skating. I love pushing myself mentally and physically every day. Taking 5+ years off from high level skating and then coming back and improving more quickly than before has really given me a new perspective on learning and training. Also, skating is so empowering. It makes me feel so expressive, free, and larger than myself. It keeps me fit too! I hope to continue to share its beauty and athleticism with others.

A wonderful interview with a great skater! Stay tuned to http://www.facebook.com/SkateGuard and http://skateguard1.blogspot.ca for more skater interviews as well as articles, commentary and special features! You can also follow me on the Twitter at http://twitter.com/SkateGuardBlog for skating tweets and whatever else I've got on the go!
Posted by Skate Guard Blog at May 29, 2013
Email ThisBlogThis!Share to TwitterShare to FacebookShare to Pinterest
Newer Post Older Post Home
"As a rule an author has one or two popular ways of contrasting the past with the present. He can treat the past as lying in comparative doleful ignorance, or he can explain that the past was infinitely superior to the day we live in. Of course, either method is the popular journalism of the moment, and in reality there is no sharp contrast, but a gradual transition which leads the past into the present." - Joel B. Liberman, Skating Club Of New York