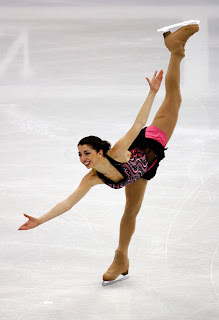 Turkey is probably one of the last countries you'd think of when it comes to producing elite figure skaters, but Tugba Karademir was the first to make that breakthrough. Making history by becoming the first figure skater to represent Turkey at the Winter Olympic Games in 2006, she repeated that feat by again qualifying for and competing in the 2010 Winter Olympic Games in Vancouver, British Columbia. During her career, she competed in 8 World Championships, 9 European Championships, a wide range of international events including Skate America, Skate Canada and the NHK Trophy and was Turkey's national champion. Retiring after the 2009/2010 figure skating season, Tugba is now a respected coach in Canada, coaching at the Mariposa International Training Centre in Ontario alongside the likes of Doug and Michelle Leigh, Lee Barkell, David Islam, Robert Tebby, Steven Cousins and Markus Leminen. I had chance to catch up with Tugba and discuss her skating career, Olympic experience, her favourite skaters of today and what she is up to now:

A: The Olympics were a huge dream come true for me. Being able to lead one’s country into the stadium at the Games is one of the biggest honors that can be bestowed upon an athlete and it was one of my proudest moments. I will never forget the atmosphere and the way the crowd welcomed the teams. It was such an emotional high for me. I am very fortunate that I was able to live out this dream twice. I get chills whenever I think about it! There was another side to this emotional high as well. It was also the most stressed out I have ever been in my life. The experiences I had there taught me a lot about myself and I am now able to handle many aspects of life with a very different perspective than I would have had I not been through these events.

Q: Tell me a little about the history of skating in Turkey and what training conditions, coaching and national competition was like there.

A: Skating in Turkey dates back to the days when my parents used to watch the European and World Championships on the one channel they had. Skating was huge on Turkish National TV but we didn’t even have a rink of our own. In 1990, one finally opened in the capital where I lived. My friends and I were practically the first generation to grow up in a rink. It was great fun at first but as we progressed, we became aware of how little opportunity there was as far as training ice, coaching, role models etc. It was a tough environment to succeed in and my parents and I found the solution in moving to Canada, known for its prowess and dominance in this sport.


Q: In moving to a different country to pursue your passion, I can only imagine the culture shock. What did you miss most about home and embrace most about Canada?

A: I missed my family, the food and the language the most. Those who know me will gladly tell you that I am a very talkative person and coming to a country where I wasn’t comfortable with the language was tough at first. I loved Canada for how inclusive everyone was but I think that The Mariposa School of Skating in Barrie where I made my home, had a huge part in that. They promptly put a Turkish flag up at the rink as soon as I arrived and I thought this was such a gracious thing to do.

Q: How did you deal with nerves and/or stress in competition?

A: There’s a loaded question! I got better at it as time went by but I definitely enlisted the help of former skaters who had been there. Luckily, Barrie had an abundance of successful skaters who were willing to share their expertise. I also had help from a great performance coach, Peter Jensen. He worked his magic with me before the short program in Torino when I was having such a hard time landing jumps in my programs in practice. Outside the solos I was fine but once the music came on, they would disappear. It was such a tough time for me but having lots of resources helped.

Q: You are now a respected coach here in Canada. Do you miss competing and do you still skate yourself?

A: I would love to skate more but I have a very busy coaching schedule and I recently finished my undergrad and got my PMP designation. I miss competing very much. I miss the people I would see at various competitions. I miss the regimented schedule I had to go through. There is comfort in figuring out what training schedule works for you and executing that year after year with a single minded focus on a goal.

Q: You competed at 7 European Championships and 7 World Championships, which is incredible by the way. What were your favourite memories from those competitions?

A: So many to name here, but I loved the cities we visited. I got to see parts of the world and meet people I never would have had the opportunity. I am grateful for all of that. I find that I am a much more tolerant person because of it.


Q: Who are your favourite skaters right now and who do you think will be on the ladies podium in Sochi?

A: I love to find the best in every skater. I think it’s the coach in me coming out. It is so easy to break something down and so hard to build it that when I think of a Mao Asada, I appreciate the powerful knees and ankles she has. When Yu Na Kim skates, I can’t help but be in awe of the sheer ease with which she moves and makes everything look so easy when I know she is executing elements which most men have a hard time getting round. I love Carolina Kostner’s speed and she is such a great person.

Q: What did you learn most from YOUR skating experience that you now teach your students?

A: I learned that mistakes happen but it is how you handle them that matters. I try to tell my skaters that this is the case in life as well as sport. It was one of the hardest things to learn for me and I believe of utmost importance.

If you enjoyed the interview with Tugba, stay tuned to http://www.facebook.com/SkateGuard and http://skateguard1.blogspot.ca for more skater interviews as well as articles, commentary and special features! You can also follow me on the Twitter at http://twitter.com/SkateGuardBlog for skating tweets and whatever else I've got on the go. It would be rude not to.
Posted by Skate Guard Blog at May 07, 2013
Email ThisBlogThis!Share to TwitterShare to FacebookShare to Pinterest
Newer Post Older Post Home
"As a rule an author has one or two popular ways of contrasting the past with the present. He can treat the past as lying in comparative doleful ignorance, or he can explain that the past was infinitely superior to the day we live in. Of course, either method is the popular journalism of the moment, and in reality there is no sharp contrast, but a gradual transition which leads the past into the present." - Joel B. Liberman, Skating Club Of New York