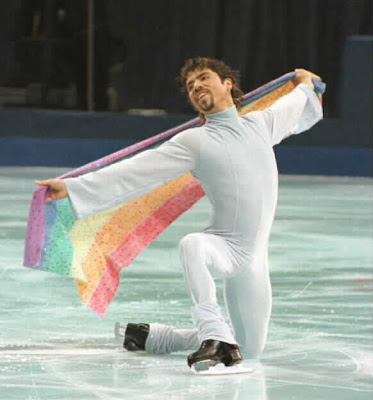 Betsy Cooper, Program Director of the Chamber Dance Company (CDC), eloquentally stated “as an ephemeral art form, people tend to let dance wash over them like a sunset, and don’t necessarily expect more of it than to be poetic, but dance is a medium that is as potent for social commentary as the spoken and written word.” And like dance, the expression and artistry of figure skating has allowed figure skaters in recent years the opportunity to make political statements and motions for change in the world through their performances. Let's take a look at 6.0 figure skaters who have used their craft to speak of the world's political climate and the injustices in it.


Perhaps the most politically charged figure skater out there, 2 time Olympic Gold Medallist and 4 time World Champion Katarina Witt used many of her extremely popular programs to bring to light issues in the world she was very passionate about. When she returned to competition during the 1993/1994 season, the free skate she performed at the 1994 German National Championships, European Championships and Olympic Games was set to a special arrangement of Pete Seeger's "Where Have All The Flowers Gone?", dedicated to the people of Sarajevo where she won her first Olympic gold medal in 1984. From 1992 to 1996, Sarajevo suffered the longest siege of a major city in the history of modern warfare. Between both sides of the conflict, 8,339 soldiers were killed or deemed missing and 11,541 civilians were killed, including over 1,500 children. Katarina's decision to publicly protest the destruction and horrors in Sarajevo on a grand scale at the Winter Olympic Games grew international attention in exactly how bad things were. Katarina went on to skate many other political programs in her career as a professional - the feminist "I Belong To Me", a haunting program in dedication to the victims of World War II to music from "Schindler's List", and "Sister's Keeper", a dedication to women suffering injustice worldwide, including the women of Bosnia among these dynamic and intense pieces.


At the 1990 World Figure Skating Championships in my hometown of Halifax, Nova Scotia, Isabelle and Paul Duchesnay performed a free dance to music from "Panpipes Of The Andes" called "Missing". Choreographed by 1984 Olympic Gold Medallist and world reknowned choreographer Christopher Dean, this beautifully constructed program did not win the competition but won the hearts of skating fans worldwide, so much so that people still talk about this program to this day. They followed "Missing" with "Missing II" in 1991, winning the world championship ahead of rivals Marina Klimova and Sergei Ponamorenko. The title of both programs referred to the film "Missing", which focuses on the topic of forced disappearance during Chile's Pinochet regime, were thousands were 'disappeared' by the Pinochet security forces. The horrific atrocities that occured as a result of forced disappearances and the Caravan Of Death were largely publicized to the general public as a result of the Duchesnay's moving and artistically advanced program, which was full of depth and expression to the core. At the time, the Duchesnay's made a point of distributing to audience members and media at that World Championship free dance a pamphlet that fully explained the program and it's political story.


In winning the 2002 Olympic title, France's 2000 World Champions Marina Anisinna and Gwendal Peizerat used a dramatic and theatrical program that shared a message of peace and liberty. "Libertas", which included the spoken word of American clergyman, activist and African American Civil Rights movement leader Martin Luther King Jr. as part of their Olympic free dance. The passionate performance set to music overlaying King's iconic 1963 "I Have A Dream" speech radiated a message of peace and freedom on the grandest sporting stage the world has, and as a result their performance reached television audiences worldwide with this powerful and timely message, considering the program was skated at the height of the American "War On Terror".

Rudy Galindo not only made history with his huge upset at the 1996 U.S. National Championships with the skate of his life and perhaps everyone else's on top of it, but he also made a huge statement on December 12, 1998, when he became the first figure skater broadcast on a U.S. television network performing a specifically gay-themed program to Melissa Manchester's cover of "Over The Rainbow" at the Keri Lotion Figure Skating Classic pro-am competition. Dick Button matter of factly stated that the rainbow flag that Galindo was skating with was "the symbol of the gay and lesbian movement" and without the bravery and unapologetic skating and personality of Rudy Galindo, skating fans and TV audiences worldwide would never have been truly exposed to their first gay, "loud and proud" skater. Galindo's story has touched members of the figure skating community worldwide and inspired a new generation of skaters to realize that despite what family members, coaches, fellow skaters or judges think, there is nothing more important in this world than being and loving yourself.


As The Beatles were to Britain and the world's music scene, Jayne Torvill and Christopher Dean are the absolute same to Britain and the world's figure skating scene. Their programs were always full of depth and interesting stories, and a fine example of a politically motivated story was not only their "Missing" program that Dean later developed into Isabelle and Paul Duchesnay's famous "Missing" programs, but their 1990 program set to The Beatles' "Revolution No. 1" (as opposed to No. 9) and John Lennon's "Imagine" that won them the 1990 World Professional Figure Skating Championships. Of the program Sandra Bezic aptly commentated "we've seen the violence of revolution, now it's peace, unity and hope".


Always theatrical and never predictable, 1988 Olympic Gold Medallists Natalia Bestemianova and Andrei Bukin have always been known for their dramatic and story based programs. Their "Rasputin" program, in particular delivered the very political and fascinating story of Russian mystic Grigori Rasputin, whose influence over the Romanov family affected both the political scene of the time and the relationship of the Russian Orthodox Church and the state. The story of his rise to power and his dramatic murder is not only historical but very political nature and the bravery and depth to which Natalia and Andrei brought the story to life in this program was not only a huge undertaking but a huge message to convey. They certainly excelled.

Skate Guard is a blog dedicated to preserving the rich, colourful and fascinating history of figure skating and archives hundreds of compelling features and interviews in a searchable format for readers worldwide. Though there never has been nor will there be a charge for access to these resources, you taking the time to 'like' on the blog's Facebook page at http://www.facebook.com/SkateGuard would be so very much appreciated. Already 'liking'? Consider sharing this feature for others via social media. It would make all the difference in the blog reaching a wider audience. Have a question or comment regarding anything you have read here or have a suggestion for a topic related to figure skating history you would like to see covered? I'd love to hear from you! Learn the many ways you can reach out at http://skateguard1.blogspot.ca/p/contact.html.
Posted by Skate Guard Blog at May 07, 2013
Email ThisBlogThis!Share to TwitterShare to FacebookShare to Pinterest
Newer Post Older Post Home
"As a rule an author has one or two popular ways of contrasting the past with the present. He can treat the past as lying in comparative doleful ignorance, or he can explain that the past was infinitely superior to the day we live in. Of course, either method is the popular journalism of the moment, and in reality there is no sharp contrast, but a gradual transition which leads the past into the present." - Joel B. Liberman, Skating Club Of New York