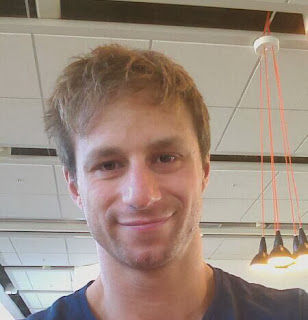 If you look at Sweden's geographical location, you would just assume it was always winter and people were always skating. Although Ulrich Salchow won the Olympic title the first time figure skating was contested at the Olympics - the SUMMER Olympics - in 1908 and a record 10 World titles, Sweden has not been a superpower in the skating world although it has produced some extraordinary, fabulous skaters. One of those skaters is Filip Stiller, who won 3 National titles and represented his country at the Junior World Championships, European Championships and World Championships. Now retired from the skating world, Stiller took the time to talk about his skating career, skating in Sweden, the current flock of men's competitors, his current career in radio and much more:

A: The best memory I have competition wise was when I, as a substitute for Kristoffer Berntsson, went to the Olympic qualification competition in 2001 in Zagreb. No one really expected me to even be close to getting a spot for Sweden but I skated clean in both programs and managed to qualify a spot for Sweden! I still remember the feeling when I had finished my free skate. I was jumping up and down on the ice! A lot of the guys that I managed to beat there were much more experienced and had placed quite high at several championships. Up until then, I had not really done any great international competitions so it was a huge confidence boost to realize I could do it. Unfortunately, Sweden decided not to send anyone for the Olympics in 2002, but it was still a great competition. Another great memory, for a totally different reason, was from the Nordics in Asker, Norway way back in 1996 when I was 13. There was a bus ride with all the Swedish skaters going to the train station, where we were all so tired and silly from the competition stress, we broke down laughing at absolutely everything anyone said. The worst memories are related to being put in second over and over to Kristoffer Berntsson, my good friend and rival over many years. During the junior years I was technically stronger but would still not beat him at Nationals even when I skated clean. He was more polished than me which the judges preferred. Later in our careers (in December 2002), Kristoffer withdrew from Nationals due to illness but was still picked over me for Europeans in Malmö, Sweden. He had landed the triple axel in competition and I hadn't. It was still such a hard blow. Overall, the pressure and agony that you feel while coming up to a competition is what I miss the least. Before my last Nationals, I had a lump in my stomach for two weeks prior to the event.

Q: Sweden is rich in skating history. The very first Olympic men's champion in figure skating, Ulrich Salchow, was from Sweden and your country has also produced some excellent skaters over the years - Catarina Lindgren, Peter Johanson, Kristoffer Berntsson, Joshi and Viktoria Helgesson, Adrian Schultheiss and yourself among them. How popular is skating in your country and has it gained popularity in recent years?

A: It is still very far behind many other sports, but there has definitely been a huge change over the last years. This has been following the success of Viktoria Helgesson, Joshi Helgesson, Adrian Schultheiss, Kristoffer Berntsson, and recently Alexander Majorov. Viktoria Helgesson (especially) has risen as a star in a way that I have never seen any Swedish figure skater do before and it makes me so happy. The Swedish Figure Skating Association now even has sponsors! That was impossible to get just ten years ago. In the media, there has always been a tradition to show figure skating championships on TV because the sport is beautiful and fun to watch. Now the interest has escalated with the success of our skaters. SVT (for example) had excellent viewing ratings during the European Championships in Zagreb in January. However, in Sweden, the most important sports in media I would say are soccer, ice hockey, riding, golf, skiing, and track.


Q: If you were going backpacking across Europe and could only take one book, one CD and one movie, what would they be?

A: My sister has been going on and on about Steve Jobs autobiography... maybe I would bring that. The CD would definitely be my countryman Avicii's amazing album "True" and I'd bring Lord of the Rings - Return of the King, because I love fantasy/sci-fi and that would keep me busy for at least three hours at a time.

Q: You are currently involved in journalism and radio. Who do you work for and what do you find the most rewarding about writing?

A: I currently work for national Swedish Radio as a reporter and news reader. The part I like the most is that I get to learn so much about the world thanks to my job. I don't necessarily have in-depth knowledge about everything, but at least I know a little about everything. I know how to find out the information that I need. And feeling that you have a pretty good idea on what's going on in the world is a rewarding feeling.

Q: When was the last time you were on the ice and can you ever see yourself getting back into competitive skating?

A: It was this spring when a friend came to visit and we went skating outdoors in Stockholm. I borrowed hockey skates because I didn't have my own with me! Before that, my sister and I skated a couple times in a rink nearby and it was good fun. Competitive skating? No... for numerous reasons. I'm too old, too heavy, too injured, and don't want to feel the pressure and agony of competing and trying to reach my goals again. Shows however, are not out of the question. I will always love to skate and perform. For now, I am focusing on my career as a journalist.

Q: Looking at the current field of men's skaters vying for medals in Sochi, who are the skaters to watch? If you were still competing, who would be the scariest to compete against?

A: I'd say to watch out for Javier Fernandez and Yuzuru Hanyu. If they can get it all together they will be very hard to beat. The question is if they can get it all together in one competition when it all matters. I hope so. Scariest to compete against? Well I don't know about scary, but Patrick Chan is such a brilliant skater artistically. He is so incredibly hard to beat just because of his sheer skating skills and musicality. There was one skater who I actually thought was scary for real and that was Yannick Ponsero, but only because his speed across the ice was unbelievable and I'd be terrified to crash in to him.

Q: Skating takes a lot of talent and also a lot of nerve. How did you manage to stay on top of the mental game of competitive figure skating?

Q: Two of your main rivals at home during your skating career were Adrian Schultheiss and Kristoffer Berntsson. What are your thoughts on their skating and what was competing against them like on a national level?

A: Kristoffer meant a lot to me during my career. He was the main reason I pushed myself so hard to become better, and I have him to thank for a lot of my progress. I always looked up to his classic skating with great lines, with good speed throughout the whole programs. In the beginning of his career he was so shy and it was hard for him to show his emotions on the ice and then, as he got more mature, he transformed in to one of the most entertaining skaters in the business. That was impressive. I will never forget his free skate at the 2007 Tokyo Worlds. Competing against him was both the worst nightmare and the best thing ever. It was a nightmare because he always seemed to compete at his best when I was the only real opponent... for example at Nationals. That was where it all mattered. I could beat him at international competitions, but in the end, that didn't matter in the long run. It was a dream competing against him because he was a fantastic friend. He was always very respectful and so easy to be around. There was one international competition where we had both spent a lot of time lying in our beds in the hotel room, feeling sick from the competition pressure and all the nerves, and I particularily remember realizing when we talked about it afterwards that he was the only other person in the world who knew exactly how it felt to go through all this. That is why I think we became close friends. I still see him, his wife and two kids when I visit Gothenburg and I am happy to have him as my friend. Adrian came to my club during the last couple of seasons of my career, and we got along very well too. He is one of the biggest natural talents in figure skating that the world has ever seen, according to me. It was unbelievable to see how big his progress was, even if there were others who worked harder. It was fantastic to see how he handled the pressure of going to the Olympics and skating as well as he did. It is so sad the injuries put a stop to his skating.

A: Alexei Yagudin because he had the power, the skating, the jumps, and the charisma of a champion but could still be graceful. He kept developing the sport with his moves. Truly my number one. Number two would be Patrick Chan, because of a flow and knee bend that I could only dream about. I still can't see him land a quad without secretly sighing "Aaaaaah!" Thirdly, Michelle Kwan, because she embodied what "grace" is all about. Especially in the earlier years, her programs were packed with content, and she made a huge impact on the figure skating world.

A: Most people don't know anything about me to begin with! When I was 11 years old, I was on a game show here in Sweden called "The Hunt For The Red Ruby", where my parents had to answer questions in a studio in Stockholm and I had to try and find rings and eventually also a ruby in different locations in Istanbul, Turkey. The more questions they answered, the more clues I got. I did find the ruby in the end and we won some money and a trip that we took to North Carolina in the U.S.

Q: What do you love most about skating more than anything?

If you enjoyed my interview with Filip, "like" this blog on Facebook at http://www.facebook.com/SkateGuard for all of the new interviews and writing as they get posted, pictures and news from the skating world and lots of great videos! You can also give me a follow on the Twitter at http://twitter.com/SkateGuardBlog. I love talking skating and would love to talk skating with you!
Posted by Skate Guard Blog at September 26, 2013
Email ThisBlogThis!Share to TwitterShare to FacebookShare to Pinterest
Newer Post Older Post Home