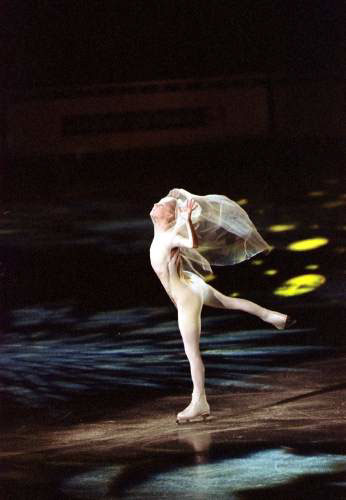 At the risk of sounding like some old prospector of yesteryear spinning yarns by a campfire... "do you know what's wrong with figure skaters today? They've lost their spunk!"... Not that I recall any old prospectors picking figure skaters' spunk as a hot campfire topic of conversation, but you know what I mean girl. In a different time (not so long ago) there used to be a lot more skaters that were serving up individuality and their own bold style; showcasing something unique that you couldn't quite put your finger on. One of those skaters that I don't quite feel has ever been recognized fully for her one of a kind style on the ice was St. Petersburg, Russia's Olga Dmitriyevna Markova.

When the Soviet Union finally collapsed on December 26, 1991, figure skaters from former Soviet countries went through a very uncertain time. The last Soviet Figure Skating Championships were held in Kiev, Ukraine in 1992 and the skaters competing went on to represent not the Soviet Union but a "Unified Team" consisting of six of the fifteen former Soviet republics (Russia, Ukraine, Kazakhstan, Belarus and Armenia) at the 1992 Winter Olympics in Albertville, France. Former Soviet republics Estonia and Latvia fielded their own competitors at those Games. With the Soviet Union being such a super power for years, there was certainly an adjustment period for those new republics, particularly in ladies figure skating. When Natalia Lebedeva turned professional in 1990, Yulia Vorobieva (who later competed for Azerbaijan) was the best finisher at the 1991 World Championships. At the 1992 World Championships, many skaters who had competed under the "Unified Team" at the 1992 Olympics went on to represent the Commonwealth Of Independent States at the 1992 World Championships. Of the ladies representing that team at the 1992 World Championships, Tatiana Rachkova was the best finisher, in 13th place. There was certainly room to grow for these skaters.

A lot happened in a year. By the time the 1993 World Championships rolled around, there was no more "Unified Team" or "Commonwealth Of Independent States" being represented. Competitors skated under the flag of their own republic. Russia, the Ukraine, Latvia, Estonia, Kazakhstan, Georgia, Lithuania, Belarus and Uzbekistan all fielded their own competitors. While the young Ukrainian orphan Oksana Baiul stole the show and won her first world title seemingly out of nowhere, Russia's Maria Butyrskaya had a rough skate at those World Championships and failed to even advance from the Qualifying Rounds. With coveted spots at the 1994 Winter Olympics on the line, she effectively took a spot away from the Russian ladies skaters in Lillehammer with her less than stellar performance. That same year, Olga Markova finished 4th at the first Russian Figure Skating Championships held since 1915.

The following year (without a trip to the Lillehammer Olympics to contend for) Olga Markova made a bold statement, winning the Russian national title ahead of Butyrskaya and a young "upstart" named Irina Slutskaya. She went on to compete at the 1994 European Figure Skating Championships, where she claimed the bronze medal with an outstanding skate, placing ahead of Butyrskaya, Tanja Szewczenko, Krisztina Czako, Anna Rechnio, Marina Kielmann, Laetitia Hubert, Marie-Pierre Leray and even 2 time Olympic Gold Medallist Katarina Witt. That same year, she made her debut at the 1994 World Figure Skating Championships, where she finished a very respectable 10th. The following season, Olga Markova was all business. Despite finishing 2nd at the Russian Championships, she earned the silver medal right behind Surya Bonaly at the 1995 European Championships and seemed poised to challenge for the gold at the 1995 World Championships in Birmingham, England when she delivered one of the finest skates of her career and finished 2nd in the short program, right behind Nicole Bobek.

Her performance in the short program at the 1995 World Championships was set to "Harlem Nocturne", and to those who aren't familiar, I'd have to put to this in my top ten list of the best short programs I've seen under the 6.0 system. In silver and black, she landed a gorgeous triple lutz/double toe combination, footwork into a triple loop and a fine double axel in a program peppered with strong spins, avant garde choreography and a spectacular spiral sequence to boot, replete with Natalia Bestemianova's famous "Besti squat", a move that Markova often included in her programs. Although only 5'2", there was something about Markova's long legged style that you couldn't quite put your finger on. She presented herself in such a way that it was almost like watching Lisa-Marie Allen, who was 5'10". The extension of her arms and free leg made her look statuesque; her icy glare reached the back row. Even after her best skates, she barely cracked a smile. She was all business. She returned for her "Miss Saigon" free skate without the same consistency she showed in her short program and dropped to 5th overall when favourites Lu Chen and Surya Bonaly rebounded after minor mistakes in their short programs.

The following three seasons proved disappointing for Markova. Establishing herself in the 1994/1995 season as a skater to beat proved a difficult 'act to follow'. Injuries and inconsistency seemed to plague her. Despite hanging on and qualifying for the Champions Series (Grand Prix) Final the next two season, she failed to ever reclaim her Russian National title. She missed the World Championships altogether in 1996 and when she returned in 1997, she finished a disappointing 12th. During the 1997/1998 season, she showed some promise of perhaps playing spoiler at the 1998 Russian Figure Skating Championships when she finished 3rd at the 1997 Cup Of Russia ahead of Surya Bonaly and Nicole Bobek, but a 9th place finish at the 1998 Russian Figure Skating Championships effectively ended her eligible career.

Turning professional, she went on to finish 2nd at the 1998 World Professional Championships in Jaca, Spain ahead of Canada's Liz Manley and to compete at the Miko Masters competition in France and the American Open Pro Figure Skating Championships as well. When her performing career ended, she choreographed for skaters such as World Junior Champion Kristina Oblasova and coached Mexico's Adrian Alvarado and Russia's Sofia Biryukova. She currently acts as one of Russia's ISU Technical Specialists in singles skating. 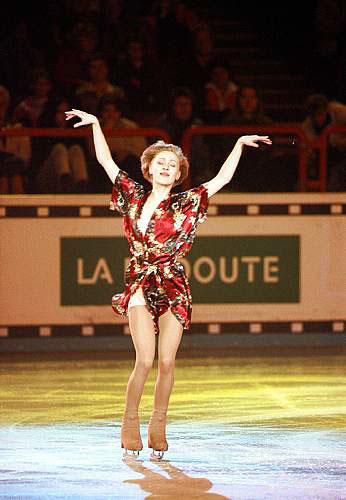 What I think really made Olga such a standout skater in her era was so much more than "the jumps". Even evident after she started struggling with the consistency of her jumps following the 1995/1996 season was this larger than life quality to her skating, this dramatic flare and intensity that made each of her (ELIGIBLE!) performances so enthralling from an artistic standpoint that to watch her performances now - even pushing 20 years later - there's a timeless quality to her skating that you can't help but appreciate. If you look at not only Olga but other ladies skaters of the era like Laetitia Hubert, Vanessa Gusmeroli and Surya Bonaly who took risks and weren't afraid to be a little different on the ice, you see the clear lesson to the ladies of today. All four of these ladies reached the top five in the world, all by daring to be a little bit different from the flock. As difficult as it is to maintain individuality and still fit in the many, many, many expectations both technically and transition wise in the IJS system, there's still room to be creative. All it takes is the RIGHT music, the RIGHT choreographer and the RIGHT attitude.

Skate Guard is a blog dedicated to preserving the rich, colourful and fascinating history of figure skating. Over ten years, the blog has featured over a thousand free articles covering all aspects of the sport's history, as well as four compelling in-depth features. To read the latest articles, follow the blog on Facebook, Twitter, Pinterest and YouTube. If you enjoy Skate Guard, please show your support for this archive by ordering a copy of the figure skating reference books "The Almanac of Canadian Figure Skating", "Technical Merit: A History of Figure Skating Jumps" and "A Bibliography of Figure Skating": https://skateguard1.blogspot.com/p/buy-book.html.
Posted by Skate Guard Blog at September 24, 2013
Email ThisBlogThis!Share to TwitterShare to FacebookShare to Pinterest
Newer Post Older Post Home