A Primer Of New France And Canada's Early Skating History 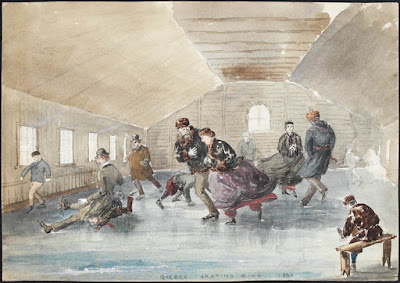 Outdoor ice skating in Canada originated as a form of transportation across frozen lakes and ponds. The Iroquois people tied the shinbones of animals to their footwear using deerskin rope and skated across lakes and ponds instead of travelling along the shoreline. Early French explorers at Acadia - right here in Nova Scotia - were thought to have ice skated in the early seventeenth century.

Early immigrants arriving in New France from Europe brought ice skates in their luggage. Travel journals and officers' diaries of the eighteenth century attest to skating's popularity in New France. On December 24, 1748, Intendant François Bigot issued an ordinance forbidding people to skate on Quebec's streets. Skates of the time were separate blades that would have been strapped, clamped or attached to a shoe or boot. 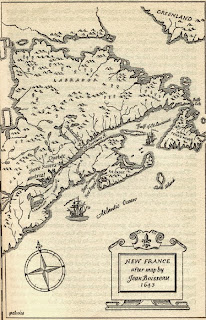 Skating's popularity in early Canada continued to thrive throughout the nineteenth century. British officers based in Canada introduced ice skating to the public as a means of recreation, helping to relieve the boredom and sense of isolation during the long, bitter winter months. Like snowshoeing, ice skating quickly caught on as not only a form of transportation but a popular recreational activity and sport. The first known game of a form of hockey was played on ice was on October 25, 1825 when Arctic explorer Sir John Franklin documented a game placed on Great Bear Lake in the Northwest Territories. The first known skating club in Canada was actually established on Lily Lake in Saint John, New Brunswick in 1833. In 1854, it is believed that speed skating was first popularized in early Canada when three British military officers raced from Montreal to Quebec (257 km/160 mile distance) on the frozen St. Lawrence River. By 1887, speed skating was a well established Canadian winter activity. In 1897, when the first World Speed Skating Championships were held in Montreal, Winnipeg's Jack McCulloch was the victor.

'Fancy skating' first developed a large following in the 1860's, in part inspired by 'The Father Of Figure Skating' Jackson Haines, who toured eastern and central Canada the 1860's. Exhibitions of 'fancy skating' were staged at the opening of new rinks and at gala balls and winter carnivals frequently held at Montreal's Victoria Rink. During this period, F. Perkins of Toronto was considered widely as Canada's top skater, winning The Gold Medal Of Canada in 1867. That very same year, the Montreal Skating Club offered an amateur competition that was "open to the world".

By the 1880's, Canada had its own early skating star, Louis Rubenstein of Montreal. Rubenstein travelled to St. Petersburg, Russia where the first 'unofficial' World Figure Skating Championships. He was also the winner of the U.S. Amateur Skating title in 1885 and 1889. Another skater of the era, George Meagher of Montreal, won another open competition in 1891 that was also claimed as a World Championship. Rubenstein was instrumental in the establishment of The Amateur Skating Association Of Canada in 1887. In 1903, Governor General Gilbert Elliot-Murray-Kynynmound, 4th Earl of Minto presented the Minto prizes to figure skaters that excelled in compulsory and special figures. In 1911, the countries first artificial skating rinks appeared in British Columbia. In 1914, the Figure Skating Department of the Amateur Skating Association of Canada held the first official annual Canadian Figure Skating Championships. Rubenstein served as this Association's first president and held that position until 1930. In 1939, the Association became known as the Canadian Figure Skating Association, which was renamed Skate Canada in 2000. The rest 'as they say' is history.

Skate Guard is a blog dedicated to preserving the rich, colourful and fascinating history of figure skating and archives hundreds of compelling features and interviews in a searchable format for readers worldwide. Though there never has been nor will there be a charge for access to these resources, you taking the time to 'like' on the blog's Facebook page at http://www.facebook.com/SkateGuard would be so very much appreciated. Already 'liking'? Consider sharing this feature for others via social media. It would make all the difference in the blog reaching a wider audience. Have a question or comment regarding anything you have read here or have a suggestion for a topic related to figure skating history you would like to see covered? I'd love to hear from you! Learn the many ways you can reach out at http://skateguard1.blogspot.ca/p/contact.html.
Posted by Skate Guard Blog at September 25, 2013
Email ThisBlogThis!Share to TwitterShare to FacebookShare to Pinterest
Newer Post Older Post Home