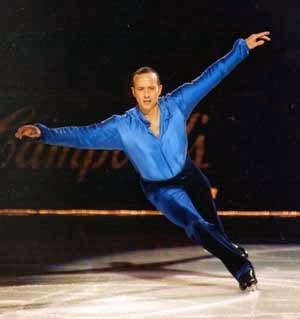 If there's one thing I enjoy just as much as figure skating, it's delicious food... and the birthday boy today is a master of both.

If you looked back four years to the 1984 Olympics in Sarajevo, it wasn't 'supposed to happen'. Brian Orser had won both the short and long programs at those Olympics yet lost the gold to Scott Hamilton owing to the results of the compulsory figures. Brian Boitano had been fifth that year, and with exceptional free skaters like Orser, Alexandr Fadeev and Jozef Sabovcik in the mix, there were certainly other favourites looking forward to the next Olympics in Calgary. But he did it... and he did it in showing the excellence not only in his jumping and technical skills but by his mastery of the art of performance as well. Winning the "Battle Of The Brians" with two OUT OF THIS WORLD performances and Olympic gold wasn't where it ended for Brian Boitano. It was where it began. He starred in his own skating tour with Katarina Witt (Skating) and in Carmen On Ice, won a RECORD 6 World Professional Figure Skating Championships, came back to the eligible ranks in time for the 1994 Winter Olympics in Lillehammer (where he laid down a gorgeous free skate to finish fifth) and returned to the professional ranks. In recent years, he's not only been still performing his soaring spread eagles and huge jumps for adoring fans but he's been a'cookin' something up - a hugely successful career showcasing his exceptional prowess in the kitchen.

Today Brian Boitano celebrates another birthday and I think it's only right that we take a moment out of our busy days and lives to celebrate the amazing contribution he's made to figure skating and watch "The Music Of The Night". We all need a little magic and inspiration in our lives. You'll thank yourself for it. Happy Birthday Brian... and many more!


Skate Guard is a blog dedicated to preserving the rich, colourful and fascinating history of figure skating and archives hundreds of compelling features and interviews in a searchable format for readers worldwide. Though there never has been nor will there be a charge for access to these resources, you taking the time to 'like' on the blog's Facebook page at http://www.facebook.com/SkateGuard would be so very much appreciated. Already 'liking'? Consider sharing this feature for others via social media. It would make all the difference in the blog reaching a wider audience. Have a question or comment regarding anything you have read here or have a suggestion for a topic related to figure skating history you would like to see covered? I'd love to hear from you! Learn the many ways you can reach out at http://skateguard1.blogspot.ca/p/contact.html.
Posted by Skate Guard Blog at October 22, 2013
Email ThisBlogThis!Share to TwitterShare to FacebookShare to Pinterest
Newer Post Older Post Home