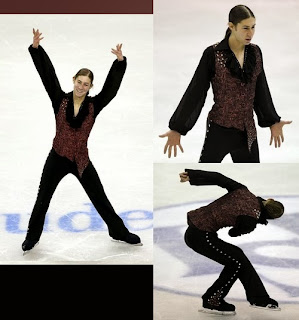 Every so often a skater comes up the ranks that just makes everyone stop what they are doing and just watch. They've got that indescribable quality: that effortless glide... that something special. They're a skater's skater... Jason Brown is just that kind of skater. After winning the bronze medal in 2009 on the Novice level at U.S. Nationals, Brown won the U.S. Junior title and went on to compete at the World Junior Championships the following year, where he finished seventh. He conquered his nemesis, the triple axel and went on to medal at the World Junior Championships the consequent two years. His season this year is already off to a roaring start, with a silver medal at the Nebelhorn Trophy in Germany and a 5th place finish at Skate America, where he finished second in the short program ahead of World Champion Daisuke Takahashi, U.S. Champion Max Aaron and Four Continents Champion Adam Rippon. With his second Grand Prix event (the Trophee Eric Bompard in France) set to get underway this weekend, the pride of Illinois took just some time out from his very busy training schedule to talk about his competitive career, relationship with coach Kori Ade, his "Riverdance" free skate, artistry and more:

Q: So far in your skating career, you've won the U.S. junior title, the Junior Grand Prix Final, two medals at the World Junior Championships and most recently finished 2nd at the Nebelhorn Trophy in Oberstdorf, Germany and fifth at Skate America in Detroit. Looking forward to the Trophee Eric Bompard in France and the U.S. Championships in January, what are your biggest goals for this Olympic season? Who do you think your stiffest competition will come from?

A: It has definitely been an extremely exciting past couple years, and it is crazy to think that it's truly only the beginning. Looking to Paris and the U.S. Championships, my main goal is to compete the way I've trained; performing and executing my programs the way I know I am capable of doing. Along with this, I constantly strive to best my highest scores, and to continue to learn and grow from every experience that I'm fortunate enough to be given, and take what I've learned through the next steps of my journey. I believe that my stiffest competition is myself. Every time I step onto the ice to compete, I want to best myself. I have no control over what anyone else does or how the judges will score, and, at the end of the day, if I skated and performed to the best of my ability, I'm happy. I can't do more than that. 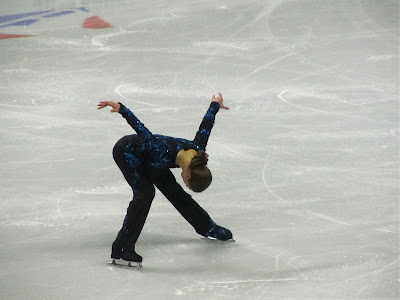 Q: How would you describe your relationship with your coach Kori Ade?

A: Kori is everything I would have ever dreamed of finding in a coach. We have an extremely professional relationship at the rink, yet she's like my second Mom off the ice. Since I started with her when I was five, she's been a part of my life as long as I can remember. She knows me better than I know myself. She has been by my side through all the ups, downs, struggles, and triumphs, and she continues to inspire and motivate me as an athlete, student, and overall person every single day. I feel so fortunate to have started with her, and I hope to be fortunate enough to one day end with her. There is no other person in the world I would rather see standing at the boards while I'm competing or training. It's truly a gift working with her.

Q: Mastering the triple Axel was HUGE! When did it click and what jumps would you say you are most comfortable with?

A: My triple Axel clicked less than a year ago at the beginning of December, four days before I left for the Junior Grand Prix Final in Sochi, Russia. It's almost our one year anniversary! My most comfortable jumps are probably triple flip and triple toe.

Q: Who is the most interesting person that you've met through your involvement in the sport?

A: I've met so many interesting people through the travel that I've been fortunate enough to do over the past few years. I love meeting people from all over the world and hearing their incredible and moving stories. Meeting skating fans and getting to know some of the Local Organizing Committee (LOC's) from around the world is something I truly value and I love to hear about their lives.

Q: You play piano! What do you find the most rewarding about playing music?

A: I've always loved taking piano lessons. I really feel that playing a musical instrument helps with my rhythm and musicality on the ice. When I was younger, playing the piano really taught me a lot about discipline, focus, phrasing, and tempo.

Q: Speaking of music, what is one song you could listen to over and over... and over again and never get bored of?

A: I don't have a particular song that I could listen to or repeat and never get bored of! I love music which either has a fun or addictive beat, along with songs whose lyrics are either motivating, touching, fun, or tell some sort of story.


Q: When I skated, the first program that I did at our Provincials here in Nova Scotia was actually to "Reel Around The Sun" from "Riverdance". I just love the music! Where did you come up with the idea to skate to it this year and what do you love most about this program and the story it tells?

A: I give all the credit to Rohene on this one! Rohene and I spent about a week looking at different pieces for my senior debut long program and at the end of the week he looked at me with the widest, brightest eyes and said, "I know exactly what you are going to skate to. I've always wanted you to skate to it, but I've been waiting for the perfect time. That time is now!" This program is by far the hardest, most exhausting free skate I have ever had, yet that is something I love most about the program. It is such a challenge, and constantly pushes me to my limits both physically and mentally. I absolutely love performing this free skate at events and I love when the audience claps along.

Q: Rohene is in his own right really one of the most compelling skaters out there. What is working with him like and why do you believe that he has brought out the best in your skating?

A: Working with Rohene is truly incredible. He's an outstanding coach and choreographer, and his talent is out of this world. Rohene is truly art on ice. He constantly pushes me to my physical and artistic limits, holding me to the highest standards, and won't accept anything less than when he knows I've given my best effort. He definitely brings out the best in my skating, taking the time to work with me on every detail and understanding each movement. We have a great relationship both on and off the ice, really enhancing the choreographing process.

A: My three favourite skaters of all times would have to be Scott Hamilton, Michelle Kwan and Meryl Davis and Charlie White. I admire Scott Hamilton both for his skating and his continuing involvement in the sport. The impact he has on people and the way he touches everyone he meets is a quality I wish to emulate. When he spoke to us at Champs Camp, he instantly captured the hearts of every athlete through his stories of setbacks, triumphs, handwork, and finding ways to persevere through the toughest times. He is my ultimate role model, inspiring me and motivating me every time I get the privilege of being around him. Michelle Kwan is a skating icon. Her longevity in the sport and her poise through every step of her career is incomparable. Her skating touched the hearts of every single person in the crowd, and she represented an era of the sport that I wish I was old enough to have been a part of. She had that gift of capturing the audience bringing them to tears and onto their feet, while off the ice being so humble and kind. Thirdly, I look up to Meryl Davis and Charlie White. Not only have I grown up watching them skate, but I now have had the privilege of traveling with them, and competing on the same US team. Their skating quality is remarkable, making every single move look so effortless. They are both the nicest, most down to earth, welcoming people. They are true champions both on and off the ice, so extremely humble and respectful. I look up to them in so many ways and I feel so extremely honoured to have met them and travel with them while they are still competing.

Q: Do you think artistry is valued enough in the IJS judging system and in skating in general?

A: Skating is one of the few sports that recognizes artistry. The IJS judging system is complicated, striving to find a balance to reward both technical and artistic skills. I understand there is controversy at times over this question, but I try not to get involved in the judging factors I can't control. I work extremely hard on artistry and constantly strive to improve my second mark. It is definitely a part of the sport that I truly value.

A: In eighth grade, I was Conrad Birdie in our middle school production of "Bye Bye Birdie"!

Q: What do you love most about skating?

A: I absolutely love to perform. There is no better feeling than putting your heart into a performance, and being able to share that experience with the audience, my family, and friends. Along with this, meeting skating fans and hearing their stories is something that I love about my skating experience. Their support means everything to me and it's my privilege getting to spend time talking to them. I also love to train. I could spend entire days locked up in the ice rink running sections of programs, doing tons of different drills, and working on each aspect of the sport. The feeling of ending my training day exhausted and dead tired is something I strive for each day.

Skate Guard is a blog dedicated to preserving the rich, colourful and fascinating history of figure skating and archives hundreds of compelling features and interviews in a searchable format for readers worldwide. Though there never has been nor will there be a charge for access to these resources, you taking the time to 'like' on the blog's Facebook page at http://www.facebook.com/SkateGuard would be so very much appreciated. Already 'liking'? Consider sharing this feature for others via social media. It would make all the difference in the blog reaching a wider audience. Have a question or comment regarding anything you have read here or have a suggestion for a topic related to figure skating history you would like to see covered? I'd love to hear from you! Learn the many ways you can reach out at http://skateguard1.blogspot.ca/p/contact.html.
Posted by Skate Guard Blog at November 14, 2013
Email ThisBlogThis!Share to TwitterShare to FacebookShare to Pinterest
Newer Post Older Post Home