Kurt Browning: 6.0 Of His Best Programs Ever 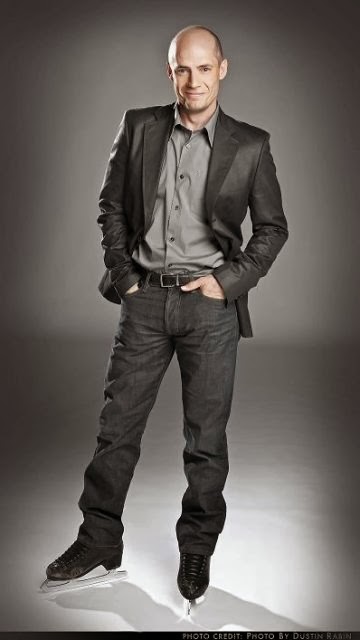 Trying to name 6.0 of Kurt Browning's best programs like trying to name 6 of Julia Child's best recipes, 6 of Tracy Chapman's best songs or 6 of one of those football people's best touchdowns or home runs or whatever it is they do. I don't know anything about the sports. I do know a thing or two about fantastic skating and as far as great technique, personality plus and a complete understanding of music and how to move to it, Kurt Browning is really one of the best the sport has ever seen.
He's a skater you can't help but like, smile with and want to succeed. He just has that twinkle in his eye that makes you feel completely at ease knowing that he's going to entertain the bejesus out of you. As it snows and blows outside, I'm nestled under a blanket with genmaicha tea poured to the brim of my favourite handpainted mug. I'm not going anywhere and I'm in the mood to be entertained and who better a skater to do it than Kurt. Do the same! Get all cozy, get yourself a hot beverage (I sound like Sheldon from Big Bang Theory) and take a minute to take in 6.0 of Kurt's best programs.
ANTARES
If I had to pick a personal favourite Kurt Browning program, "Antares" would probably be it to be honest. Chalked full of difficult technical elements, challenging and VERY musical footwork and layered with this moody depth to the choreography set to original music composed especially for Kurt by The Tragically Hip, this program was nothing less than a masterpiece. It won him the 1997 Canadian Professional Championships and 1997 World Professional Championships and was choreographed by Sandra Bezic.
BRICK HOUSE
I've been lucky enough to see this one live! I think this song is one of those pieces of music that I'll always associate with something - in this case, this program choreographed by Michael Seibert and Clarence Ford. This won Kurt the Canadian Professional Championships and was twice used as his artistic program at the World Professional Championships (1995 and 1997). Needless to say, he won with it both times and it speaks for itself. It's just a sexy good time kind of song and program. You can't go wrong.
SERENADE TO SONIA


Dedicated to his then fiance Sonia Rodriguez, this program led Kurt to a win at the 1996 Canadian Professional Championships and 1996 World Professional Championships. Set to a medley of music of Nat King Cole - Introduction, Are You Disenchanted?, Wouldn't You Know, Madrid and L-O-V-E, this program was not only rich in fabulous Sandra Bezic choreography but charm and genuine emotion. A classic.
LIGHTNING CRASHES


Where Kurt is so well known for his playful personality on the ice, you don't often really sit down and think/realize just how gifted he is at interpreting more serious or emotional pieces, but this program choreographed by Lea Ann Miller to "Lightning Crashes" by Live (skated at both the Ice Wars and Rock N' Roll Skating Championships in the 90's) is a prime example of Kurt rocking a darker, more emotional piece and just shining.

Debuted at the 1998 Sears Canadian Open, which Kurt won ahead of skaters like Michael Weiss, Brian Orser, Steven Cousins and Eric Millot, this hilarious program wasn't all clowning around. It meant business too and won Kurt the 1998 World Professional Championships, his third World Pro title. Set to the music of Latvian violinist Gidon Kremer, this program was a joint effort of Sandra Bezic and Kurt and will be forever remembered as one of his best.

SINGIN' IN THE RAIN

Singin' In The Rain... what can you say? I was so excited about the revival of this Sandra Bezic program when Kurt skated to it on this year's Stars On Ice tour. Getting to see it live was an absolute joy to watch. This program, as featured above, was first performed for Kurt's 1994 TV Special You Must Remember This and was brought back to life and reworked by Kurt in 2012 for the Medal Winners Open competition in Japan, the first true pro-am competition the sport had seen in some years. I think the only way to describe this program and do it justice is to say that it's like forgetting that you're watching skating. You're watching dance, you're watching theatre and you're watching magic too.

Skate Guard is a blog dedicated to preserving the rich, colourful and fascinating history of figure skating and archives hundreds of compelling features and interviews in a searchable format for readers worldwide. Though there never has been nor will there be a charge for access to these resources, you taking the time to 'like' on the blog's Facebook page at http://www.facebook.com/SkateGuard would be so very much appreciated. Already 'liking'? Consider sharing this feature for others via social media. It would make all the difference in the blog reaching a wider audience. Have a question or comment regarding anything you have read here or have a suggestion for a topic related to figure skating history you would like to see covered? I'd love to hear from you! Learn the many ways you can reach out at http://skateguard1.blogspot.ca/p/contact.html.
Posted by Skate Guard Blog at December 15, 2013
Email ThisBlogThis!Share to TwitterShare to FacebookShare to Pinterest
Newer Post Older Post Home