One Hundred Years Before Boston: The 1914 U.S. Figure Skating Championships 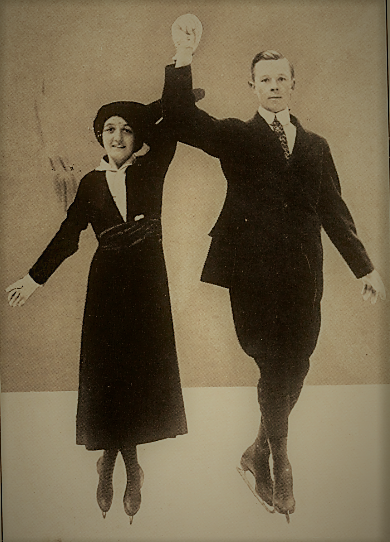 One hundred years ago in New Haven, Connecticut, the very first International Figure Skating Championships of America was held "under the auspices of the International Skating Union of America (I.S.U. of A.), the governing body for both speed and figure skating during the early 1900s. The competition was created to promote the international style and attempt to streamline figure skating in the United States. As a result of the direction brought by the I.S.U. of A... the United States Figure Skating Association was formed in 1921 to govern the sport and promote its growth nationwide," according to U.S. Figure Skating. This competition, which is recognized as the first U.S. Figure Skating Championships was not only a historic first and starting point in U.S. figure skating history, but a competition full of stories and names like you wouldn't believe. 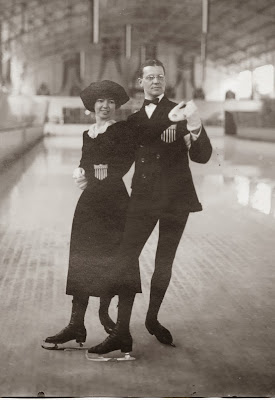 The first U.S. men's and pairs champions weren't Americans at all, but Canadian figure skaters by the name of Norman Mackie Scott and Jeanne Chevalier who won the Canadian men's title and pairs title respectfully the same years they won the American titles. The silver medallist in the men's and pairs competition and the ladies champion (and the top American born finishers) were Nathaniel Niles and Theresa Weld Blanchard.

Theresa Weld Blanchard and Nathaniel Niles represented the Skating Club Of Boston, which is a really interesting connection considering one hundred years later and only days away, Boston is playing host to the U.S. Championships. Theresa, who hailed from Brookline, Massachusetts, in fact won the U.S. title six times but never competed at a World Championships. She did however thrice compete at the Winter Olympics, winning bronze in 1920 in ladies singles, finishing fourth in 1924 and tenth in 1928. In pairs with partner Niles, she was fourth, sixth and 9th at the same consecutive Games. The duo of Weld Blanchard and Niles even excelled at ice dancing as well, winning 5 U.S. ice dance titles to complement their nine pairs titles together. When her own skating career concluded, Weld Blanchard (known as Tee Blanchard to her many friends in the skating community), put pen to paper and served  as volunteer editor of the United States Figure Skating Association's official publication, Skating magazine; first jointly with Niles from the magazine's founding in 1923, and then as sole editor after his death in 1931, up until 1963. The magazine was originally published out of her home. She also acted as the first chairperson of the association's Professionals Committee from 1937 to 1947. 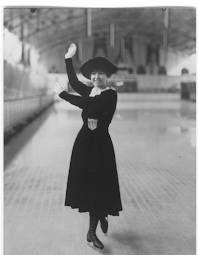 Here's where things get interesting... and they really have little to do with skating! Edith Eliot Rotch, who won the silver medal in the ladies competition in 1914 competing against Weld Blanchard, had previously won the U.S. National mixed doubles title on the tennis court with Weld Blanchard's future partner Nathaniel Niles. Niles was a VERY accomplished tennis player in his own right, competing on a national level through to 1918. He was inducted into the New England Tennis Hall of Fame posthumously in 2000. What's interesting in this partnership on the tennis court between Rotch and Niles isn't just that Weld Blanchard and Rotch competed against each other at those U.S. Championships in 1914, but that Rotch and Niles later went to head to head on the ice, competing against each other for the U.S. pairs titles in 1920 and 1922. Rotch later joined Weld Blanchard and Niles in serving on the Publications Committee that actually resulted in Skating magazine being formed. This is where skating comes full circle... former partners competing against each other aren't the new concept that pairs skating fans think they are - this all started 'when it all began'. 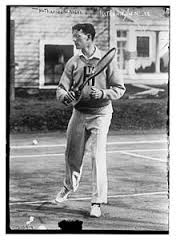 Nathaniel Niles on the tennis court

If only one could ask Scott, Chevalier, Niles, Weld Blanchard and Rotch what they thought of today's skating with its overhead lifts, triple twists, death drops and quadruple toe-loops. With the elimination of compulsory figures from world competition in 1990, skating today hardly resembles what it would have then. TES and PCS scores, indoor competitions and the dominance of youth - not to mention the costumes - would surely be a complete culture shock to their systems. We anxiously await to see how Jeremy Abbott, Ross Miner, Max Aaron, Adam Rippon (or "Alex Rippon" if you read Boston.com), Jason Brown, Ashley Wagner, Gracie Gold, Agnes Zawadzki, Christina Gao, Castelli and Shnapir, Scimeca and Knierim, Denney and Barrett, Davis and White, Lynn and Logan, Hubbell and Donahue and hundreds more of America's best skaters fare at what for many will be the most important competition of their careers leading into the 2014 Winter Olympics in Sochi, Russia. As we do, we look back to a different, simpler time in the sport when away from TV cameras in icy rinks the skating pioneers that started it all had defining moments of their very own.

Skate Guard is a blog dedicated to preserving the rich, colourful and fascinating history of figure skating and archives hundreds of compelling features and interviews in a searchable format for readers worldwide. Though there never has been nor will there be a charge for access to these resources, you taking the time to 'like' on the blog's Facebook page at http://www.facebook.com/SkateGuard would be so very much appreciated. Already 'liking'? Consider sharing this feature for others via social media. It would make all the difference in the blog reaching a wider audience. Have a question or comment regarding anything you have read here or have a suggestion for a topic related to figure skating history you would like to see covered? I'd love to hear from you! Learn the many ways you can reach out at http://skateguard1.blogspot.ca/p/contact.html.
Posted by Skate Guard Blog at January 06, 2014
Email ThisBlogThis!Share to TwitterShare to FacebookShare to Pinterest
Newer Post Older Post Home