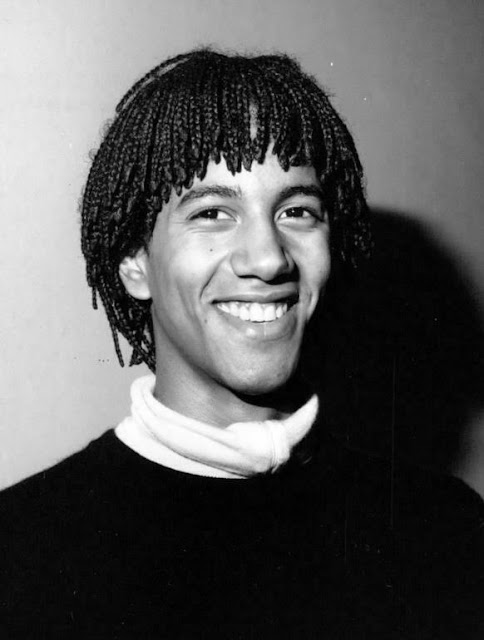 I tried roller skating once and ended up falling in a barrel garbage can in the back patio of a bar while in drag. Personally, I don't see a lot of similarities between figure skates and roller skates at all. I love me some deep edges and the security of you know, a toe pick. I remember growing up and being just floored knowing that skaters like Marina Kielmann were able to simultaneously focus on competing on an elite level in figure skating and roller skating at the same time - Kielmann won three consecutive medals at the World Roller Skating Championships in between her trips to the Calgary and Albertville Olympics as a figure skater. It just kind of blew my mind and still does, I think really because I found one natural and the other completely unnatural. 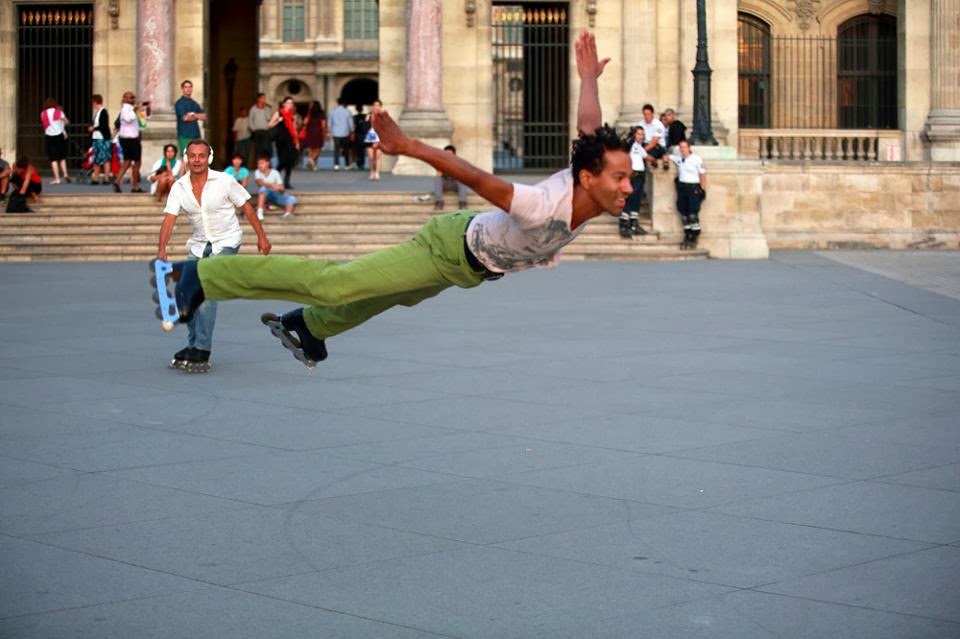 Even more remarkable is the story of France's Fédronic, a French National Figure Skating Champion and elite skater of the eighties who was a specialist in compulsory figures and went to a career as a successful professional figure skater, coach/choreographer extraordinaire and commentator. Just years ago, decades after his "amateur" career had ended, he took up roller skating and is now one of the world's top competitors (and champions) in a brand new (and in my opinion, quite different though similar) sport. Fernand's unique story spans his eligible and professional careers and includes the stories of close associations with Surya and Suzanne Bonaly, Didier Gailhaguet and many more and he was kind enough take the time to do this wonderful interview.

Q: During your figure skating career, you twice won the French Junior title before becoming France’s senior men’s champion in 1985.  In representing France internationally at major competitions such as the European Championships, World Junior Championships and World Championships, you certainly would have experienced  so many fantastic moments. What are your proudest moments on the ice from your “amateur” career?

A: When you are on the podium with your national anthem playing for you and because of your golden result, that was for me at the Grand Prix International in St. Gervais, France in 1982 (long time ago) and when I won the compulsory figures at the European Championships in 1985. One thing with great satisfaction was at Junior Worlds in 1981 in London, Ontario when, after smashing myself into the barrier at the short program warm up, I had to stay in a chair of ice for 5 hours before the long program to be able to move and maybe skate... and I did (not very good though)!

Q: You were an expert at compulsory figures, winning the men's compulsories at the 1985 European Championships ahead of Jozef Sabovcik and others. Why were figures so important and do you think today's skaters and coaches need to re-explore this lost art as a training tool?
A: You are very well informed! Well, I began skating because of my older brother Dominic (who did the first triple Lutz in the Junior World Championships in Megeve in 1979). He was very good in free skating as I couldn't be so I think I trained myself to exist in an other way. I was practicing so many hours to achieve that - about 7 hours per day to prepare the big events. Once, I had incredible marks for my backward paragraph loops... between 5.0 and 5.2. A real dream at that time. Nowadays those compulsory figures do not exist anymore - it is from the TV and audience interests I suppose. For the skaters, it's certainly a gain of time and comfort (cold feet and fingers for hours...). The most part of actual figure skaters don't know the history of edges and turns and elements which is the culture of our sport! To go backward, except the increase of lesson hours, would not be the point. We still have this step sequence to remind us this knowledge but for how long? The velocity goes against the pure edges. There are a lot of new paths to explore. 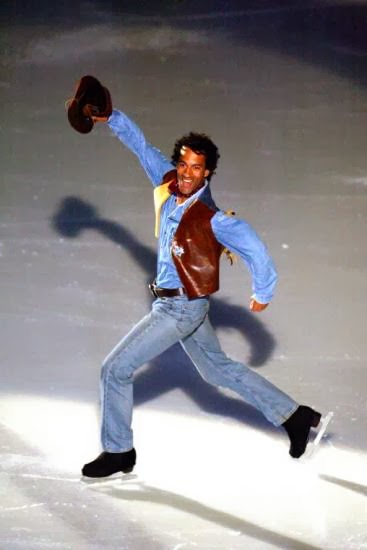 Q: Following the 1987/1988 season, you turned professional and finished second at the World Professional Championships in Jaca, Spain in 1990. What are the differences between "amateur" and professional skating and what the merits of both?

A: In our great sport, we have this incredible opportunity of double attraction for the main audience to watch and/or to get into the sport. The technical performance way with the suspense and thrill of the achievement and the only entertainment way. Creativity is welcome in both. For the skaters, there is only one champion (even if the path is more important than the goal) but it is good to have as well a positive way to be proud of, and more accessible.

Q: You are a three-time champion at the World Inline Figure Skating Championships representing Glace & Roller Inline Paris (2011-2013). Was inline skating something you had an interest in while you figure skated and how difficult was the transition to make, especially to go back to competing after so many years away from your competitive career on the ice?

A: In the late 80's, I ordered PicSkate inline skates (only God knows why) but I never really used them and 3 years ago a friend talked to me about fun Inline roller skating and competitions. I tried and found it really similar to ice skating but different enough to give me the feeling I start something new. Honestly, at my age (forty-nine), I still enjoy very much the contact with the audience but I don't have anymore the courage to practice on ice but to see my skating level decreasing. I discovered in Inline Figure Skating a way to practice with fun, to get very quickly to a good level and to fill the thrill of a competition (real competition against myself and against the time that goes). Now I have created my own Inline skating club named V.I.P. with honorary members like Surya Bonaly and Stannick Jeannette.

Q: For a time, you worked with Suzanne Bonaly in coaching 5 time European Champion Surya Bonaly. What was your relationship with the Bonaly’s like and what makes Surya such a unique and amazing skater in your opinion?
A: I was there to help at a time it was needed only in the choreographic aspect and representing as a coach. Surya is a skater with incredible athletic skills that she still has after all those years and a leader for black people in skating as was Debi Thomas. I met Surya the first time when I returned from San Francisco where I was in summer school with Brian Boitano and Yvonne Gomez under the coaching of Linda Leaver. She was a very young skater from Nice and already a good  jumper. When she upgraded to Paris National Skating School she stayed with her mother Suzanne in my sister's apartment we kindly rented to them.

Q: You’ve travelled all over the world doing choreography for other skaters, performing and working for the ISU as a Technical Specialist. What is your favourite place you’ve visited and where is one place you’ve never been you’d most like to?

A: I love Southeast Asia and discovered wonderful people and landscape in Myanmar, delightful food, wild nature and spiritual atmosphere in Laos, unexpected modernity in China, the essence of life and affordable incredible luxury in India, the war between stone and jungle in Cambodia, and magic Malaysia or Vietnam or Thailand and almost all Mediterranean countries... not really skating places but sunny places! I really want to finish my ancient Greek and Rome tour by a visit to Egypt and am ready to start Central and South America and lower African countries. A huge program!

Q: You are a tenor and have given over eighty performances as Paris in La Belle Hélène. Having studied at Conservatoire Supérieur de Musique in Paris and having such a long eligible skating career, you certainly have learned a lot about discipline. What do you figure skating and musical performance have in common, in your opinion ?

A: Music, performance, practice and audience. I am still waiting the opportunity to do the both in real optimum conditions.

Q: During your eligible career, you were coached by Didier Gailhaguet. What is your relationship with him like?

A: Difficult to say. I was in sport school 500 km from my parents home from the age of twelve and probably Didier was a bit like another father. Then sport life goes by and the end of the competitive career approaches and water runs under the bridge and I try to help as I can with the figure skating my own way, avoiding all political aspects. 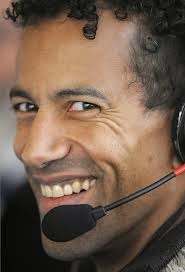 Q: Who are your three favourite skaters of all time and why?
A: Moiseeva and Minenkov because they were the dream on TV. Gary Beacom, because of an incredible creativity and amazing magic performance on a tour I organized in Italy... with his bird call program at minus 10 temperature at night, in an outdoor rink nearby a forest. The magic stayed for several minutes after the end of the great number because all the birds in the trees woke up and started to sing... A fairy tale! Third, both Shawn Sawyer and Kurt Browning. They bring another dimension into the ice.

Q: What’s one thing about you most people don’t know?
A: I was born in Lyon (continental France) from parents from Martinique island with a great French poet in the family ancestors from my mother side (Arthur Rimbaud) and a big melting pot of ancestors (India, Italy, the Northeast of France and Africa).

Q: To someone who has never skated, how would you describe the feeling of being out on the ice by yourself?

A: I love skating to the limit of my edges, enjoying the curves and the feeling of the wind on my cheeks. I love moving to music and to leave my body and revel in its sensation of the outside world.
Skate Guard is a blog dedicated to preserving the rich, colourful and fascinating history of figure skating and archives hundreds of compelling features and interviews in a searchable format for readers worldwide. Though there never has been nor will there be a charge for access to these resources, you taking the time to 'like' the blog's Facebook page at http://www.facebook.com/SkateGuard would be so very much appreciated. Already 'liking'? Consider sharing this feature for others via social media. It would make all the difference in the blog reaching a wider audience. Have a question or comment regarding anything you have read here? Have a suggestion for a topic related to figure skating history you would like to see covered? I'd love to hear from you! Learn the many ways you can reach out at http://skateguard1.blogspot.ca/p/contact.html.
Posted by Skate Guard Blog at January 19, 2014
Email ThisBlogThis!Share to TwitterShare to FacebookShare to Pinterest
Newer Post Older Post Home