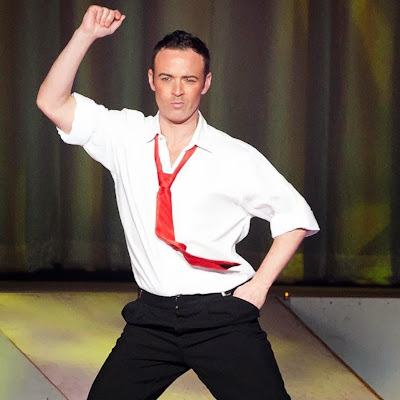 Leaving an indelible icy footprint on the sport and boasting an extremely loyal fan base throughout his rich skating career is something that really made Michael Chack a fan favourite throughout his skating career. He keeps extremely busy to this day with teaching and performing engagements at Sharks Ice and Yerba Buena Ice Center and with Rand Family Entertainment, where he continues to perform as a principal soloist. Chack first really caught the skating world's attention by winning the 1989 U.S. Junior title, earning a fifth place finish at the 1991 U.S. Figure Skating Championships and through wins at international competitions such as the Nebelhorn Trophy and Karl Schafer Memorial and a bronze medal at the 1993 U.S. Championships, he made a name for himself that continued to expand in popularity over his lengthy and successful career. Turning professional in 1999, his skating continued to be revered by skating purists for its impeccable technique and line and his touring with Holiday On Ice exposed him to appreciative audiences worldwide. It was my absolute pleasure to speak with him about his "amateur" and professional careers, how the term "Chacked" will be forever associated with him, the IJS judging system and much more:

Q: You competed at the senior level at seven U.S. National Championships, winning the bronze medal in 1993 (as well as winning several international events) and retired from ISU eligible competition in 1999. What was your favourite competition you participated in and why?

A: I had so many memorable competitions because I set certain goals for each one and reached them. One that that will always be special is Skate America - my first major international as a senior - and I landed my first triple Axel and got a standing ovation. I always loved competing overseas representing the U.S. in internationals and seeing our flag go up.

Q: The jargon team "Chacked" was coined after your bronze medal winning performance missed the broadcast during the 1993 Championships for skaters whose performances were not televised and certainly should have been. What was your feeling about this whole experience?

A: The term "Chacked" still makes me laugh because I feel it's made a impact in every sport that when a athlete has a special moment and it's not seen by the public, gets recognized. It's nice to be remembered that way.


Q: What have you been up to since retiring from competitive figure skating?

A: Gosh... where do I begin with after I turned pro? I had the most amazing pro career. Seen the world, been challenged with amazing choreographers and turned me into a very versatile performer. It also gave me the ability to skate just for the love of it with no pressure. I now teach and choreograph mostly in San Francisco but still perform I'm short term gigs. I'm not ready to give up the performing side of my life yet but love teaching.

Q: Who did you most enjoy skating or competing with and who was your fiercest competitor?

A: I was very lucky to train in Arrowhead and train everyday with Michelle Kwan, Nicole Bobek, Angela Nikodinov and the top pros in the world. I was my own fiercest competitor. I always wanted to beat my last competition. I focused on me and what I had to do.

Q: What are your thoughts on the new judging system and do you think you would have liked to have competed under this scoring system? Does it help or hurt skating and overall performances?

A: The new IJS system is quite a mathematical challenge and makes the sport so much more complicated. Not sure how I feel about it. I think they created it so it is truly fair judging.

Q: At the 1991 U.S. National Championships, you attempted an insanely difficult and unheard of one-foot axel/quadruple salchow combination. What prompted you to attempt this ridiculously difficult jump combination?

A: As far as my quad, I just loved jumping and trying different things and pushing skating limits.

A: Having Peter Burrows for 15 years taught me how to be a true technician and he was wonderful for me at the time in my life. Frank was what I needed to close my career because we clicked so well.

Q: Your style was and is always very mature and put together, with excellent line, carriage and extension. Did you take off ice dance training or was this quality in your skating simply a result of strong skating skills?

A: I took dance classes through my entire career and still dance to keep in shape and be creative as a modern choreographer.

Q: Who are the most fascinating personalities in the sport today?

A:  I feel we don't have American stars like we used to. Champions change every year and I just respect all those who can stand up under such pressure in the sport these days.

Q: Who is your hero in life?

A: My hero in my life is my family and those who still love and believe in me.

Skate Guard is a blog dedicated to preserving the rich, colourful and fascinating history of figure skating and archives hundreds of compelling features and interviews in a searchable format for readers worldwide. Though there never has been nor will there be a charge for access to these resources, you taking the time to 'like' on the blog's Facebook page at http://www.facebook.com/SkateGuard would be so very much appreciated. Already 'liking'? Consider sharing this feature for others via social media. It would make all the difference in the blog reaching a wider audience. Have a question or comment regarding anything you have read here or have a suggestion for a topic related to figure skating history you would like to see covered? I'd love to hear from you! Learn the many ways you can reach out at http://skateguard1.blogspot.ca/p/contact.html.
Posted by Skate Guard Blog at January 24, 2014
Email ThisBlogThis!Share to TwitterShare to FacebookShare to Pinterest
Newer Post Older Post Home