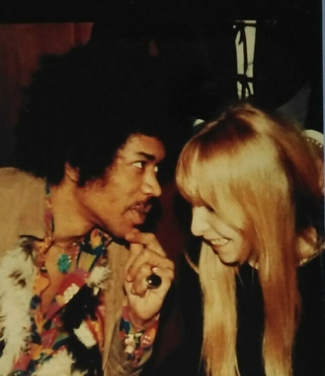 In 1965, Jimi Hendrix entered a New York City recording studio and recorded "The Ballad Of Jimi", ominously predicting a singer named Jimi would be dead in five years: "Many things he would try, For he knew soon he'd die. Now Jimi's gone, he's not alone. His memory still lives on. Five years, this he said. He's not gone, he's just dead." As close to five years as it gets from the time this song was written, Jimi Hendrix was no longer 'part of this world' and it was his connection with figure skater/skating coach Monika Dannemann that remains one of the most controversial parts of the story of his death to this very day. 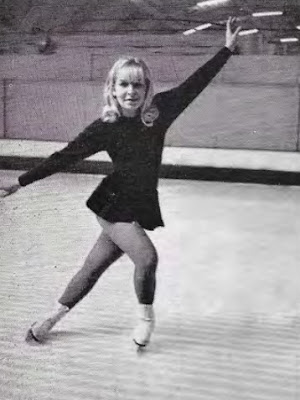 Born in June of 1945, Monika Dannemann was a German figure skater and painter. One source stated she was reportedly a student of Olympic Gold Medallist Sjoukje Dijkstra but I'm dubious of this as Sjoukje was still obviously competing at this time. At any rate in 1965, Monika participated in the German Figure Skating Championships representing the club Düsseldorfer EG. She finished sixteenth but won several medals and trophies at other competitions leading up to this national appearance. Following the end of her skating career, she turned to coaching.

After being invited to a January 1969 Jimi Hendrix concert in Düsseldorf, Monika reportedly met and spent the night and part of the next day with Hendrix and accompanied him to his next concert in Cologne. Jimi spent the final night of his German tour with model Uschi Obermaier - they were filmed going at it outside of the Kempinski Hotel the following morning. Three months later and skating coach Monika was hooked, travelling to London, England on April in the hopes of bumping into him again. You read that right. She did end up spending one night with Jimi out of her 9 day visit after 'bumping into him' at the Speakeasy Club. A year later after his relationship with Danish model Kirsten Nefer ended, Jimi and Monika reconnected and spent the next four nights together at her flat in the Samarkand Hotel in Notting Hill Gate, where he died. During this four day visit, she claimed Hendrix proposed to her.

On the evening of September 17, 1969, Jimi Hendrix took nine of Monika's Vesparax sleeping tablets to help with sleep problems - the recommended dose being one tablet at maximum. The following morning, Monika claimed she found Hendrix in a coma at her basement flat and called for an ambulance. Hendrix was officially declared to have died at St. Mary Abott's Hospital just over an hour after that ambulance had arrived, the cause of death being asphyxiation through aspiration of vomit due to a barbiturate overdose. Reports certainly cast suspicion on Monika - there was a scarf wrapped tightly around Hendrix's neck, he'd been dead for hours when they arrived and she wasn't at the flat when the ambulance arrived. Her stories about the events surrounding Hendrix's death were inconsistent with those of hospital and ambulance workers as well as the autopsy performed on him.

Life after Hendrix's death wasn't rosy. Monika was lambasted by Hendrix's fans as "the skater from hell". Her house was described as an eerie shrine to the singer, filled with paintings she'd painted of him. She married German guitarist Uli Jon Roth of The Scorpions and wrote a book called "The Inner World Of Jimi Hendrix" about her experience "living and working with Hendrix"... interesting as they'd probably spent less than a couple weeks in total together over the two years they were acquainted. It was never published due to slanderous comments included about Hendrix's former girlfriend Kathy Etchingham. Monika kept Hendrix's famous black Stratocaster, nicknamed 'Black Beauty'. It was last seen at a guitar event in 1995 in London. She was found guilty of contempt of court for breaching a British High Court Order against her not to repeat false allegations against Kathy Etchingham. Two days later, she was found dead in fume-filled Mercedes Benz near her cottage in Seaford, East Sussex at the age of her fifty, her death ruled a suicide. Her funeral was attended by less than one hundred people - mostly Jimi Hendrix fans.

Skate Guard is a blog dedicated to preserving the rich, colourful and fascinating history of figure skating and archives hundreds of compelling features and interviews in a searchable format for readers worldwide. Though there never has been nor will there be a charge for access to these resources, you taking the time to 'like' the blog's Facebook page at http://www.facebook.com/SkateGuard would be so very much appreciated. Already 'liking'? Consider sharing this feature for others via social media. It would make all the difference in the blog reaching a wider audience. Have a question or comment regarding anything you have read here? Have a suggestion for a topic related to figure skating history you would like to see covered? I'd love to hear from you! Learn the many ways you can reach out at http://skateguard1.blogspot.ca/p/contact.html.
Posted by Skate Guard Blog at February 25, 2014
Email ThisBlogThis!Share to TwitterShare to FacebookShare to Pinterest
Newer Post Older Post Home
"As a rule an author has one or two popular ways of contrasting the past with the present. He can treat the past as lying in comparative doleful ignorance, or he can explain that the past was infinitely superior to the day we live in. Of course, either method is the popular journalism of the moment, and in reality there is no sharp contrast, but a gradual transition which leads the past into the present." - Joel B. Liberman, Skating Club Of New York