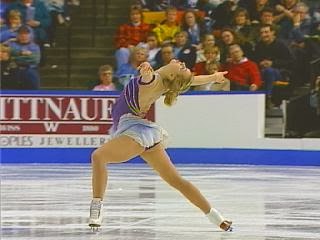 With commentators like Rod Black, Barbara Underhill, Tracy Wilson, Paul Martini, Chris Cuthbert and Debbi Wilkes bringing their skating stories into our homes throughout the 1990's, we felt like we were really getting to know the athletes who were representing Canada on the world's biggest stages. One of those skaters was Keyla Ohs, a Canadian Junior Champion who turned to the senior ranks and won the Canadian silver medal in 1998 after finishing just off the podium the previous year. With elegance and poise far beyond her years, it was clear she had something really special. Just over 20 years after her Canadian junior title win in 1993, Keyla took the time away from her busy life in the skating world to talk about her competitive career, work with Sandra Bezic, the current state of Canadian ladies skating, her current role in the sport and much, much more:

Q: You won the Canadian National title on the junior level and went on to compete internationally
representing Canada in Grand Prix events and at the World Junior Championships and win the silver medal in Canada in 1998. What are your fondest memories looking back on your competitive skating career and what were the most challenging?

A: I think my fondest memories were the travels abroad with my Mom and getting to experience places like St. Gervais, France which was like walking smack into the dancing hills scene in the Sound of Music! I remember staying there in a century old house equipped with beautiful creaky floorboards and different coloured shutters - it was darling. There is nothing quite like representing your country internationally at an event. I was honored to be sent around the world to represent Canada. One of the most difficult things I dealt with was my broken back in '95. It took a serious toll on my confidence and was very difficult to rebound from. I had moved through the Pre-Novice, Novice, Junior levels to Senior very quickly and on top of adjusting to that and desperately trying to acquire the technical elements needed to compete at the Senior level the back injury made this progress difficult.

Q: You worked with Linda Brauckmann during your career. What was your relationship like with your coach and now, as a coach yourself, how important do you feel having a connection between skater and coach truly is?

A: Linda and I had a great relationship. She was an incredible technician and had an impeccable eye. I can still remember her playfully saying "KISS! Keep It Simple, Stupid!" when it came to remembering technical details. I think the connection between a coach and student is the glue that keeps everything together when times get tough. If you can inspire, motivate, and manage a student all at the same time while still establishing a deep mutual respect for one another at the end of the day, there is magic in that. Sometimes an athlete needs to hear a certain something to get them to achieve greatness when the work has already been done - and a great coach knows just what to say and when to say it.

Q: What I admired about you during your skating career was your elegance and musical interpretation. How important is good choreography and who was your favourite choreographer to work with?

A: I think the choreographer is like the medium you use in art. Depending on which direction you go, you can create something completely different with the same athlete. The choreographer's job is to find the skaters strength and develop it... and sometimes to pull that something special out of a skater you might not first have imagined was embedded deep inside them. I have fond memories of working with Sandra Bezic when she designed my solo to "Sabrina". She was such a lovely person. She invited me into her home to stay with her back east during choreography and her hospitality and creativity will never be forgotten.

Q: Some of your competitors during your skating career - even in Canada - were very tough: Josee Chouinard, Jennifer Robinson, Susan Humphreys, Annie Bellemare, Angela Derochie... what did you learn the most from competing against such strong skaters?

A: Competing against these ladies was always motivating. You never knew what anyone was going to deliver so I quickly learned to never underestimate anyone. They all had tremendous potential. It kept me on my toes.

Q: Your last trip to the Canadian National Championships was in 2000. What prompted your decision to retire from competitive skating and what have you been doing since?

A: I retired from competitive skating because I wasn't loving it any more. Sometimes you need to know when to let go... and I'm not sure I knew. After I left the sport I went to UBC and SFU and graduated with a political science degree. I then found myself drawn to personal development and meditation and ran a group titled 'Manifest Destiny' (not to be confused with the U.S, mindset of the 19th century that provided the rhetorical tone for the goal of the largest acquisition of U.S. territory). I spoke publicly about the power of positive thought and worked with many people on developing themselves in this vein. Since then, I have moved on to coaching at the B.C. Centre of Excellence in Burnaby after being given a tremendous opportunity to mentor with Joanne McLeod. Under her guidance I have been able to see the flip side of the coin as a new coach and renewed my love of the sport. When you are given an opportunity to work with someone as inspiring as Joanne  you drop everything and take it.

A: Ekaterina Gordeeva and Sergei Grinkov- sheer magic and a seamless combination of athleticism and art on ice.

A: I was adopted.

A: When you think you can't train any harder, TRAIN HARDER! Also be mindful of your thoughts about your future in your sport. Your mind creates your reality, so tend to it carefully.

Q: How important is having a positive attitude in life?

A: How you think about your life is the single most important thing, in my opinion. Like attracts like - so if you believe a certain something it is bound to become true for you. This works both positively and negatively, which is why knowing yourself is very important.

A: Gloria Gaynor's "I Will Survive". Love that song!

A: No, my focus is on coaching and developing skaters at an elite level now. I am also LOVING choreographing.

A: Kaetlyn is incredible. I am so proud of her and having skated alongside Ravi during my own career I am so proud of both of them. Women's skating looks bright and I can't wait to see what the future holds. There is also some incredible talent coming up in the novice ranks I think we should keep an eye out for.

A: I sometimes feel being on the ice is more natural to me than walking, maybe because I've been on the ice now for almost 32 of my 35 years. There is no better feeling than moving your body to a piece of music that stirs you emotionally while the ground moves and glides beneath you.

If you enjoyed the interview with Keyla, stay tuned and "LIKE" the blog on Facebook by visiting  http://www.facebook.com/SkateGuard for more skater interviews as well as articles, skating history, commentary and special features! You can also follow me on the Twitter at http://twitter.com/SkateGuardBlog for skating tweets and whatever else I've got on the go. It would be rude not to!
Posted by Skate Guard Blog at March 01, 2014
Email ThisBlogThis!Share to TwitterShare to FacebookShare to Pinterest
Newer Post Older Post Home