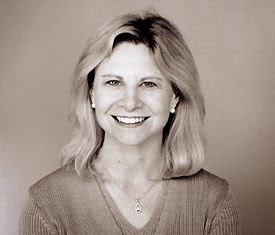 If the name doesn't ring immediately ring a bell, Linda Villella is her married name. You may know her by her maiden name, Carbonetto. In 1968, Linda Carbonetto finished second at the Canadian Figure Skating Championships behind World Champion Karen Magnussen and earned a berth on the Olympic team that traveled to Grenoble, France. The following season, nineteen year old Carbonetto, who had been touted as "the nation's next great international champion" by the Toronto Star's Jim Proudfoot, traveled to Toronto and unseated Magnussen to win the Canadian title, even earning a perfect score of 6.0 for her flawless free skate. The student of Ellen Burka then traveled to the North American Championships in Oakland, California and won the bronze medal. She followed that up with a sixth place finish at the 1969 World Championships in Colorado Springs. Then as quickly as she rose to the top, she decided to move on. Carbonetto joined the professional ranks, toured with Ice Capades and later married renowned ballet dancer and choreographer Edward Villella and turned her attention to the dance world, taking on a key role with the Miami City Ballet School. Villella took the time to talk about her life in skating, her thoughts on the sport's evolution and her current life both in and out of the sport:

Q: Since you competed at the 1968 Olympics, only three Canadian ladies (Karen Magnussen, Liz Manley and Joannie Rochette) have won Olympic or World medals. Why do you believe Canadian ladies skaters have historically been labelled as "having a hard time laying it down when it counts" and how bright do you think the future of Canadian skating is?

A: I don’t think I am qualified to answer your first question. I was in Miami for twenty five years involved with ballet and Miami really does not make ice skating a priority. It was wonderful to come back to New York where ice skating is so much more appreciated. I have no idea what the training is like in Canada. I do believe consistency is the key to successful competing. It always amazed me, when I was competing, how skaters would put in jumps to their program that they hardly ever landed.

Q: Compulsory figures played a huge part in the scoring when you skated. Do you think that the end of figures was a good or a bad thing?

A: I think figures are really important. Edges are the key to great skating and figures also teach you control. I don’t believe they should be a part of major competition but I do believe it should be compulsory for skaters to take figures and pass the figure tests in order to compete. 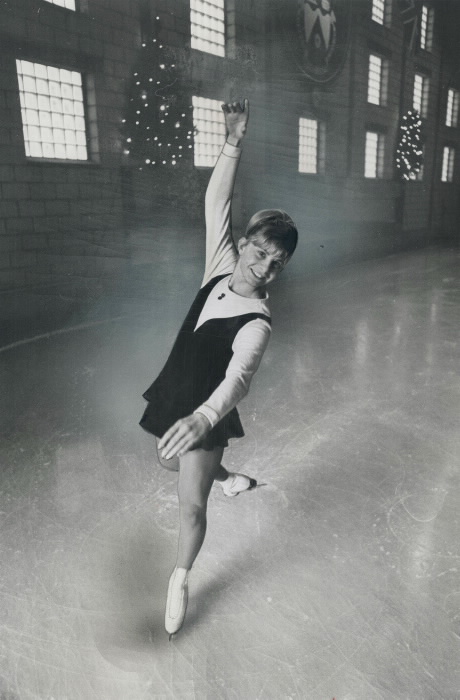 Q: You skated professionally after your eligible career ended, touring with Ice Capades. What were the most fun and most difficult aspects of a grueling tour schedule?

A: Skating in Ice Capades was very hard for me. I really was not ready to join an ice show but my parents were out of money for my training and I had to put my brother through college. I was heartbroken that I could not compete in the Olympic in 1972. Remember: I had beaten Karen in 1969 and my figures had improved tremendously. I often wonder if I could have medalled in 1972. In Ice Capades, we toured ten and a half months a year, we were in a different city every week and we did nine to eleven shows a week. It was grueling and we didn't have much time for ourselves. We also were doing the same routine for that whole year which made it monotonous. Again, it was a hard time for me anyway so I had trouble adjusting. Ice Capades was very good to me so I think it was more my attitude at the time. I still made some good friends and had a lot of laughs.

Q: As a professional, you also appeared on a TV show called Ice Palace. What can you tell us about it?

A: Metromedia owned Ice Capades and when we did the Ice Capades television specials they sent a producer named Peter Engel to oversee the show. He then decided to do the Ice Palace variety show where he had different stars like Robert Goulet and Florence Henderson along with skating stars like Tommy Litz. There was also a skating corps. Bob Turk choreographed the show. I did seven of the eight shows.

Q: You are married to legendary U.S. ballet dancer and choreographer Edward Villella and are the founding director of the Miami City Ballet School. What do you love most about dance that skating doesn't offer and vice versa?

A: What I love about dance most is the wonderful choreography by truly brilliant people like George Balanchine, Jerome Robbins and Paul Taylor that made you "see the music". In ballet, pieces can be thirty minutes long and the theme of the piece can be choreographed on a whole corps of dancers with the lead couple integrated into the piece. Some of this work is very sophisticated and the abstract movements came from the great ideas in history and art. These pieces are in a company repertoire for years. Different dancers will be selected to dance the different leads and you can watch each dancer's interpretation of the piece. In skating, most pieces are done on a soloist or pair skater, they are the only ones to do that choreography and it usually is a five minute piece and then you go on to watch another skater. In skating, I love the flow that the ice gives you and the movement it can create. There is such a wonderful freedom to moving across the ice and when I used to jump I felt like I was flying. 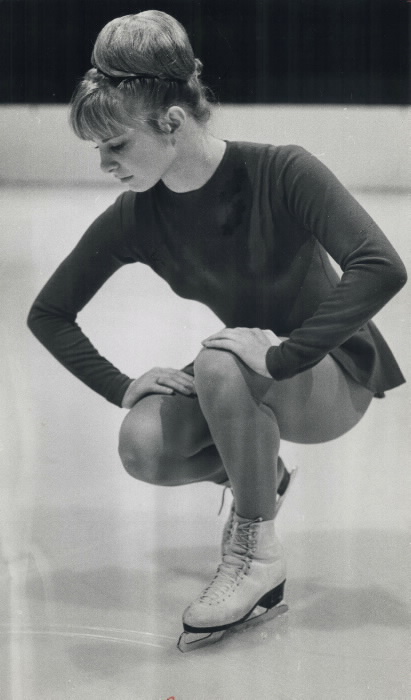 Q: You competed against skaters like Peggy Fleming, Gaby Seyfert, Trixi Schuba, Karen Magnussen and Janet Lynn. What were your impressions of these iconic skaters?

A: All the skaters I competed against were incredible athletes. They all had special qualities in their skating. With Trixi, her figures were amazing. Peggy had grace and beautiful jumps, and Gaby and Karen were incredibly powerful. I leave Janet Lynn for last because she was the skater that I loved to watch most. She was ethereal on the ice. Her calm, her beautiful lines and beautiful jumps were the epitome of ice skating to me.

A: Most people don't know I was crippled and wore iron braces on my legs when I was three years old. I started skating at seven because my dad heard about children who had polio and were strengthening their legs through ice skating. 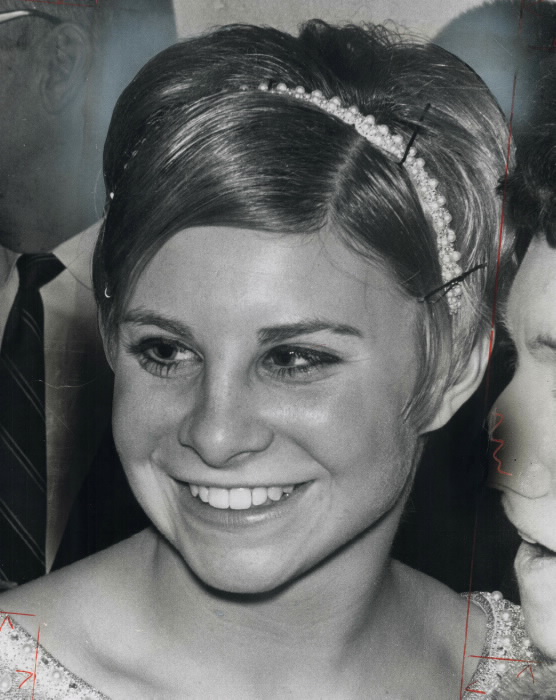 Q: What are your feelings on competitive skating today - the new system, no more 6.0, no figures, no compulsory dances.... so much has changed. Is it for the best?

A: I really don't like the new system of judging. It is too complicated for most people who don't know skating and even a lot of us older people who used to skate. I worry that it will take a toll on developing an audience. The freestyle numbers have so many requirements that sometimes the quality of the skating is not what it should be. My recommendation would be to judge each requirement individually (like in gymnastics) and then go back to the original way the long program used to be judged with two sets of marks, one for content and the other for your presentation. I would have nine judges and throw the high mark and the low mark out in order to prevent favoritism.

Q: Skaters of the 70's and 80's like Brian Boitano, Midori Ito, Dorothy Hamill and Liz Manley (for instance) are still actively performing. When is the last time you were on the ice and would you ever perform again?

A: I did not skate for about fifteen years in Miami and started to skate again last year when I moved back to New York. Skating is like an old friend. It is always there for you. I would never perform again. I am just not the skater I used to be, although I still skate and it makes me very, very happy.

Skate Guard is a blog dedicated to preserving the rich, colourful and fascinating history of figure skating and archives hundreds of compelling features and interviews in a searchable format for readers worldwide. Though there never has been nor will there be a charge for access to these resources, you taking the time to 'like' on the blog's Facebook page at http://www.facebook.com/SkateGuard would be so very much appreciated. Already 'liking'? Consider sharing this feature for others via social media. It would make all the difference in the blog reaching a wider audience. Have a question or comment regarding anything you have read here or have a suggestion for a topic related to figure skating history you would like to see covered? I'd love to hear from you! Learn the many ways you can reach out at http://skateguard1.blogspot.ca/p/contact.html.
Posted by Skate Guard Blog at April 12, 2014
Email ThisBlogThis!Share to TwitterShare to FacebookShare to Pinterest
Newer Post Older Post Home
"As a rule an author has one or two popular ways of contrasting the past with the present. He can treat the past as lying in comparative doleful ignorance, or he can explain that the past was infinitely superior to the day we live in. Of course, either method is the popular journalism of the moment, and in reality there is no sharp contrast, but a gradual transition which leads the past into the present." - Joel B. Liberman, Skating Club Of New York