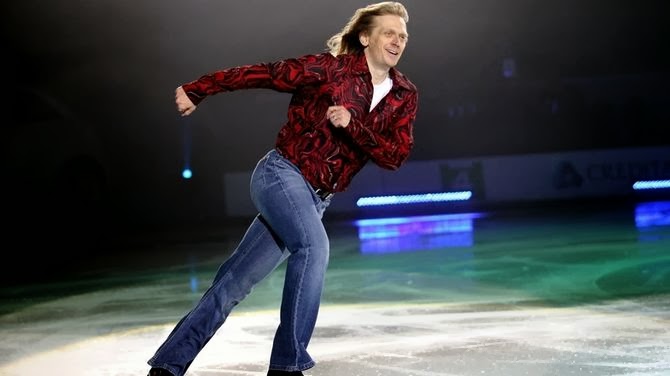 My first memory of watching Jozef Sabovcik skate was on a PBS special called "World Cup Champions On Ice", a skating production on a theatre stage that featured skating greats like Marina Klimova and Sergei Ponomarenko, Liz Manley, Caryn Kadavy, Petr Barna, Anita Hartshorn and Frank Sweiding, Charlie Tickner and Alexandr Fadeev. There was just something so captivating about Sabovcik's style on the ice that drew you in and commanded your attention. The 1984 Olympic Bronze Medallist and two time European Champion had an exceptional career as an "amateur". He won six Czechoslovakian titles and held the distinction of being the first person to land a quadruple jump in competition, although it was later deemed invalid because of an alleged touchdown of his free foot.

Retiring from the "amateur" ranks in 1986, Jumpin' Joe went on to a hugely successful professional career, competing (and winning) in many professional competitions, touring around the world and making a huge name for himself and his larger than life skating style in the process. Now a coach and still performing at fifty, I talked to Jozef about his career, trademark backflip, Russian split jumps and tuck Axel, his programs, his thoughts on skating today and much more in this fantastic interview which took place in March.


Q: Your career has been filled to the brim with so many incredible experiences: the 1984 Olympic bronze medal, two European titles, six Czechoslovakian national titles and wins in professional competitions like the World Team Championships, U.S. Open and Rowenta Masters On Ice. What moments are you proudest of from your entire skating career and why?

A: Every competition has its own importance in my career because if even one of them was changed, I may not be where I am today. Obviously, the Olympics is up there, but I am very proud of defending my European title in 1986 and in the way in which I did it. As for pro moments, the U.S. Open is definitely one of them, because I was going through a bitter custody battle (which I eventually ended up winning) yet I was able to rise above it all and perform one of the best programs of my career. Then there was the moment at the 2002 Opening Ceremonies, when I stood among all those children of light with 80,000 people in attendance and half the world watching. It was truly incredible.

Q: Your professional career has been filled with so many REALLY memorable performances - "Trapped", "Ol' Man River", "Sarajevo", "Alone You Breathe" and "Heaven Can Wait" among them. Where do you draw your inspiration for the music you skate to, how would you describe your choreographic process and what programs that you've skated professionally were YOUR favourites to skate to?

A: Once I decided to skate to music that I listened to, it was pretty easy. It all started with Bruce and the reaction I got when I performed "Fire". From then on, it was just a matter of what song spoke to me at that time. Some numbers would come together as quickly as an hour, which was the case for "Heaven Can Wait". Others would take longer. My friend Stewart Sturgeon helped me with most of them. I would tell him an idea and he shaped it. Some of my early ones like "Fire" and "Heaven Can Wait" I still go back to to this day. I have been toying with the idea of bringing back my wife's favourite, "Secret Garden". There are others that I enjoy coming back to like "Lift U Up" by Gotthard. I don't know. They are all my favourites, but some of them like "Trapped", I cannot perform the way I did in the past so they are best left alone.


Q: Where did you learn your amazing tuck Axel, split jumps and backflip and how physically taxing is performing those moves when you skate today? I couldn't imagine!

A: Well, the split jumps I was doing since I was little. My parents were both ballet dancers and I was always naturally pretty flexible. The backflip was a long time coming, because I wanted to do it the first time I saw Terry Kubicka do it on TV at the 1976 Olympics. Although I could do it on the floor without any difficulty, my federation forbid me to try it on the ice, for fear of me getting injured. Once I retired it was the first think I set my mind to. I was trying to emulate Robin Cousins' pike backflip, but somehow it developed into my layout one. As for the tuck Axel, it was almost an accident. I was trying to do something like an Axel/hitch kick and I did something that ended up being my tuck Axel.

Q: Czech men's skating has two huge stars in Michal Brezina and Tomas Verner and Slovakia has a up and comer in Marco Klepoch. What was training in Czechoslovakia like 'in your day' and do you think we'll see more skaters rise out of both countries and contend in the future?

A: The sport today is totally different than when I was growing up. Everything was paid for by the government once you got into the elite program: ice time, coaches, everything. In return, they wanted results otherwise you would be dropped from the program. My coach did her best to shield me from it all, but I was aware of it anyway. Today it is all different. It's extremely expensive to skate. Ice time is limited, so most of the skaters do not even train in Slovakia or Czech Republic. I am sure that at some point there will be skaters that will be on top again, because we do have very talented people. They just need to be given the right environment so they can create their own chances.

Q: Staying on that vein, of today's men's skaters (particularly those who competed at the Olympics in Sochi), who are the biggest stars in YOUR eyes?

A: They are all amazing. I cannot even imagine competing today. I really enjoyed Hanyu. He is young and fearless, an amazing talent and he has a great coach.

A: That is a very difficult question and truly it does not matter if I like the system or not. It is here and we all have to live with it, which I'm well aware of as a coach. I think the drawback to it is that it is complicated and the general public has a hard time understanding it. We might have lost some of our audience because of that.

Q: You now live in Utah and are married and the father of two boys - Jozef Jaden and Blade. I remember Blade from  TV broadcasts in the 1990's and do not even WANT to ask how old he is now because I just know it's going to make me feel ancient. What has parenthood taught you about yourself?

A: It has taught me that I love being a father and a husband. Blade is now 21, moved out on his own, working full time and going to college. Little Jozef is amazing. He's 10, playing drums, doing really well in school and I am very proud of them both.

A: Just three? Robin Cousins was always my hero. I looked up to Ondrej Nepela, because I grew up skating on the same ice and he was so kind to me. Scott, Brian and Brian, Kristi, Janet Lynn, Roz, Kurt, Elvis... Take your pick!

A: In the days of Facebook, I really don't know! It seems to be all out there. Ask my wife, she'll probably tell something that even I'm not aware of!


Q: Where and we can we see you perform next?

A: I am just getting new boots, so I'm taking a bit of a break from skating but at the end of April I'll be doing our annual Bountiful Skating Club show and skating with all the kids from our club, most of which I work with. Then it's Sun Valley again, probably. You never know! I am fifty years old but I still enjoy it.

Q: What's the biggest lesson that a lifetime of figure skating has taught you?

A: Patience and perseverance. You fall, you get up and try again.

Skate Guard is a blog dedicated to preserving the rich, colourful and fascinating history of figure skating. Over ten years, the blog has featured over a thousand free articles covering all aspects of the sport's history, as well as four compelling in-depth features. To read the latest articles, follow the blog on Facebook, Twitter, Pinterest and YouTube. If you enjoy Skate Guard, please show your support for this archive by ordering a copy of the figure skating reference books "The Almanac of Canadian Figure Skating", "Technical Merit: A History of Figure Skating Jumps" and "A Bibliography of Figure Skating": https://skateguard1.blogspot.com/p/buy-book.html.
Posted by Skate Guard Blog at May 09, 2014
Email ThisBlogThis!Share to TwitterShare to FacebookShare to Pinterest
Newer Post Older Post Home