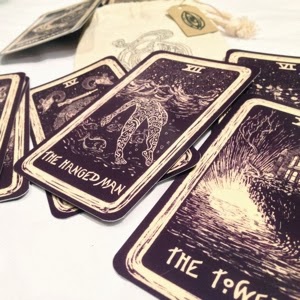 What many of you probably don't know about me is that I'm about as much the "new age" type as it gets. I'm surrounded by candles, incense, crystals, wood and rocks and when I take the time to write these blogs, I usually have Tracy Chapman, Natalie Merchant, Fiona Apple, Emm Gryner or something ethereal playing. My bedroom has three giant bookcases full of books which include a host of wonderful classics, an anthology of pretty much everything Margaret Atwood has ever written, a small and growing collection of historical skating books and hundreds and hundreds of books on everything from spirituality to reincarnation, life after death, holistic healing, angels, Tarot cards, numerology, astrology, dreams, angels, meditation, astral projection, karma and texts on just about every religion under the sun. I am fascinated by different viewpoints; I have this inner drive to delve into "the unknown".

I also have a treasured deck of tarot cards. The origin of Tarot cards remains vague and shrouded in mystery and more questions than answers. Some claim the cards to have originated with the ancient Egyptians, others with the mystery cults of the Mithras in the first centuries after Christ, while still others find parallels with pagan Celtic beliefs and romantic poetry cycles of the Middle Ages in Eastern Europe. The first documented decks of Tarot cards, however, are known to have come from the latter part of the 15th century and were painted in Italy. The new world-view of the time and the conflict with the Church that ensued placed the cards in wide disrepute  socially, and they became associated with 'the Devil', as did any form of divination or termed "witchcraft". Yet, their use has transcended and survived centuries and the cards have been used as counsel and forms of divination for people of virtually every religion, race and walk of life.

Now, before you all call me crazy, I have a story to share with you. I was extremely close with both of my grandmothers and idolized them, along with my parents, my whole life. They both passed away in 2007 within six months of each other when I was going through a really rough patch already and I had a really, really hard time with it. A few years later, I went to Kelliena, a wonderful and reputable psychic (not the first one I've been to) and not only was she able to tell me things about myself and my loved ones that had passed on that no one else would know, but she was not only able to clearly identify both grandmothers but know that I called them both 'Nanny'. There was no poking, there was no prodding, there was no leading me there... this was the real deal. Having had experiences with charlatans as well, I can tell you that with everything else in life, there are honest and dishonest people. This was honest and this was real and I treasure that conversation and experience.

I am not a psychic or a medium but I do absolutely believe in the power and the experience of divination. One of the simplest Tarot readings you can do is a three card reading to allow you to gain perspective on three key points and their connection, for instance, past, present and future, strengths, weaknesses and advice or opportunities, challenges and outcome. To lightheartedly apply the context of Tarot divination, I decided to do a three card spread and take a look at opportunities, challenges and outcome as they related to the life of one of the most iconic skaters ever in the history of figure skating, three time Olympic Gold Medallist Sonja Henie. 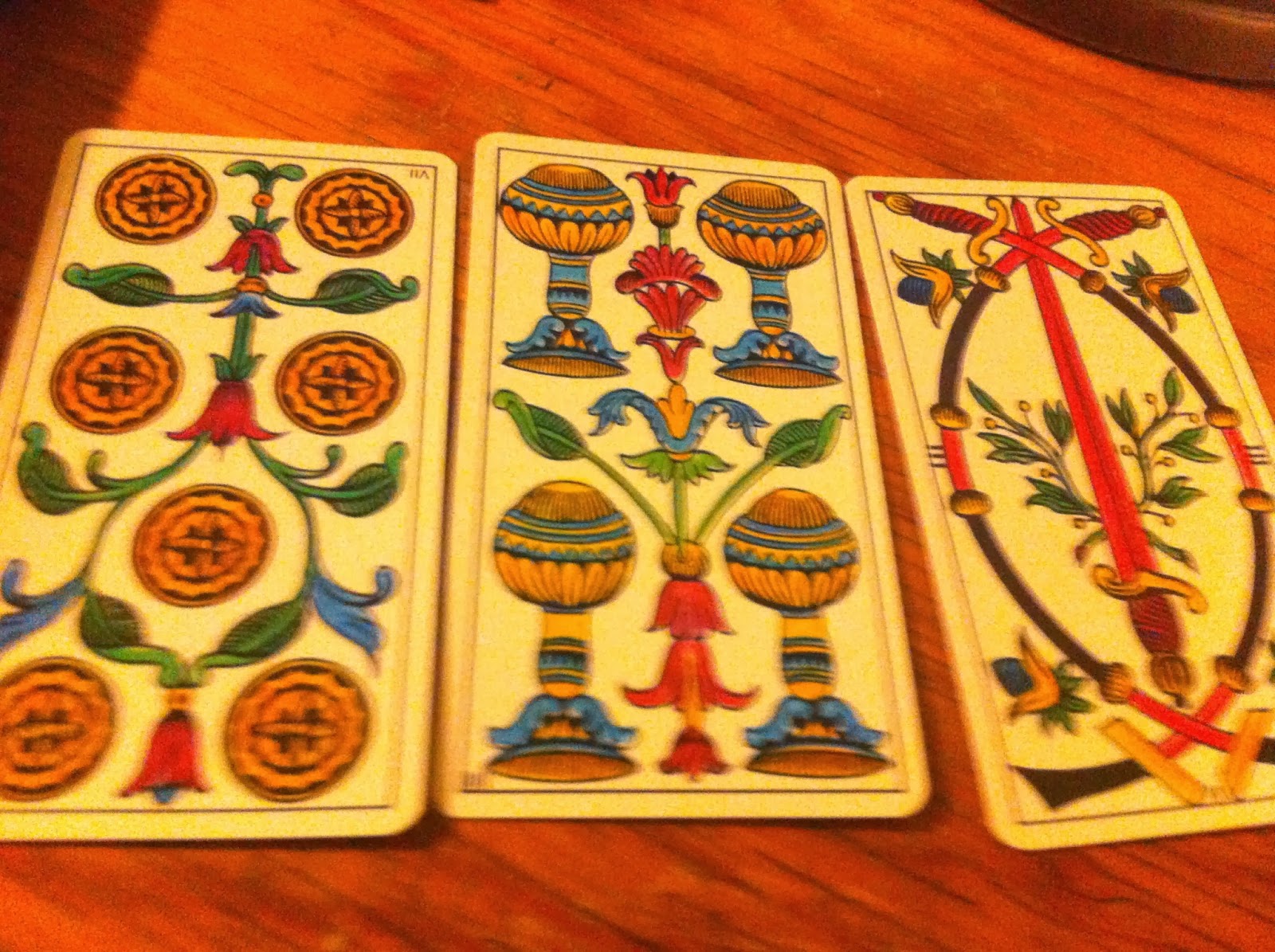 OPPORTUNITIES: THE SEVEN OF PENTACLES (REVERSED)

The Seven Of Pentacles (reversed) speaks to a return on an investment. It signals a need for clarity about what success means to the person and what the 'current situation' will provide for in the future. Such would certainly be relevant to the opportunities that Sonja Henie afforded in winning three Olympic gold medals and ten World titles. Henie's father, known to many simply as 'Papa Henie' was a wealthy furrier and both he and Henie's mother Selma had also inherited wealth as well. Her father had invested large sums of money in Henie's success, ensuring that she was educated by the best tutors and even hiring Russian prima ballerina Tamara Karsavina of the Imperial Russian Ballet to work with his daughter. In the height of their daughters success, both 'Papa' Wilhelm Henie and Selma gave up their own pursuits to travel exclusively with their daughter and act as agents, demanding 'expenses' for Sonja's exhibitions even under the strict "amateur" rules of the time that did not allow ISU eligible skaters to be paid for their performances. The fame and star success that Henie as a result of her competitive career more than returned on the investment her parents made in her skating. After turning professional following the 1936 World Championships, Henie became not only a star of the ice but of the silver screen and earned as much as two million dollars a year, making her one of the richest skaters of her time.


CHALLENGES: THE FOUR OF CUPS

The Four Of Cups symbolizes re-evaluation; a feeling that situations or circumstances have lost their appeal or luster - and the senses of boredom, disillusionment or unfulfilled expectations. The card forces one to retrace their steps and look at the changes that need to made in order to have - or maintain - what is desired. The latter part of Henie's career was not all roses. In the early 1950's, after a decade long series of hit movies starring Henie had lit up the silver screen, Henie returned to the touring life and produced her own tours. Things weren't as they once were and challenges seemed to be at every turn. Having broken ties with Arthur Wirtz who acted as her financial advisor for years, 'Sonja Henie's Ice Revue' was in direct competition with Wirtz's shows who featured Canadian sweetheart Barbara Ann Scott. The market was becoming saturated, the collapse of a section of bleachers during a 1952 Baltimore shows left Henie's tour in legal and financial hot water and a later 1956 tour in South America was a flop. Henie was drinking heavily and it was affecting her ability to meet the demands of touring. Forced to re-evaluate the direction her skating and life was going at the time, she retired from skating in May 1956.


OUTCOME: THE THREE OF SWORDS

The Three Of Swords represents the process of sorrow or grief, and a lack of focus, of bitterness and of disappointment - also of mistrust. Henie, who was famously obsessed with money, status and in some accounts the possessor of a strong temper, was diagnosed by doctors with leukemia but her husband Niels Onstad reportedly kept the illness from her. Sonja was told she had anemia and the blood transfusions she was receiving regularly were for that reason alone. She planned to make a big comeback for a TV special, even taking to the ice to rehearse a program set to "Lara's Theme" from Dr. Zhivago but passed away aboard a flight to Oslo, where she was to receive another blood transfusion. Her will specifically disinherited all members of her family. Her two closest aides who served her for over twenty five years didn't receive a bequest. Instead, Henie bequeathed ten thousand dollars to the cemetery where her father was interred and sent her prized jewels to the Sonja Henie Foundation. Interestingly relevant to the process of sorrow and grief about one's life is this story I wrote for my Skate Guard Hallowe'en Spooktacular:

"In the height of 3 time Olympic Gold Medallist Sonja Henie's career in 1939, a 7 bedroom, 8 bathroom mansion was built at 243 Delfern Drive, across the street from the real Sunset Boulevard in Los Angeles, California by Old Hollywood architect Paul Williams. Dubbed Chez Henie by the superstar that contracted the house's design, this mansion was every bit as luxurious as you'd expect. A sweeping circular driveway, a dramatic staircase, a swimming pool, sunken tennis courts and even a small private indoor skating rink built in the house's attic were included in the house's design. Actress Connie Stevens purchased the home in 1974 for $250,000 (a complete steal) from Sonja's late husband, Niels Onstad. Over the years, the home has been leased to legendary musician Herb Alpert and even played host to the filming of the motion picture Postcards From the Edge, based on Carrie Fisher's novel about a smart, drug prone actress much like Carrie herself and her intense Debbie Reynolds-like show business mother. In a feature on BIOGRAPHY's Celebrity Ghost Stories, Stevens recounts the sounds of someone walking around in the attic and going upstairs to investigate and finding beautiful old drawings of little Norwegian children playing and having fun and the remains of an old skating rink upstairs. Stevens believed it was an insight into Sonja's soul. Never having had children of her own, being childlike and loving children, this very well could have been Sonja's tribute in a way. She believes that the spirit of Sonja lives on in that attic, which was converted to a roller skating rink for Stevens' daughters. Attic lights flick on on their own, especially when Connie has guests are over for outside parties. About a year before her Sonja's death on October 12, 1969 at age 57, she was planning on making a grand comeback in the form of a television special she was planning right up until her death. She went to the local rink at least 3 times a week getting back in shape, skating with one of her old skating partners from the early days, enjoying herself and completely unaware that the tiredness from her believed anemia was actually leukemia, a fact her husband and personal secretary never told her about, right up until the day of her death. Is the ghost in the attic really the ghost of Sonja Henie, still drawn to her attic ice rink and oblivious to her illness?"

Henie's life, like the advice of the Tarot Cards, was shrouded in mystery, interweaving stories and thought provoking connections. Whether you believe in divination or not, the cards in this case certainly seems to help ME make sense of Henie's story.

But WAIT... there's more! If you call within the next 30 minutes, we'll throw in this link to the blog's Facebook page, which has news, features and videos that aren't on the blog for the low, low price of free. That's right... I don't do this for PayPal donations or profit of any sort. I write this blog because I believe in great skating - artistic skating - and want to share stories about the sport's history, its amazing skaters and areas of the sport you may not know enough about with as big of an audience as I can. All you have to do is "LIKE" it: http://www.facebook.com/SkateGuard. If you get 10 friends to like, I'll throw in a big hug. And if you get 100 friends, let's just as I'm "that kind of girl".. haha. You can also follow all of the fun along on Twitter at http://twitter.com/SkateGuardBlog.
Posted by Skate Guard Blog at June 08, 2014
Email ThisBlogThis!Share to TwitterShare to FacebookShare to Pinterest
Newer Post Older Post Home