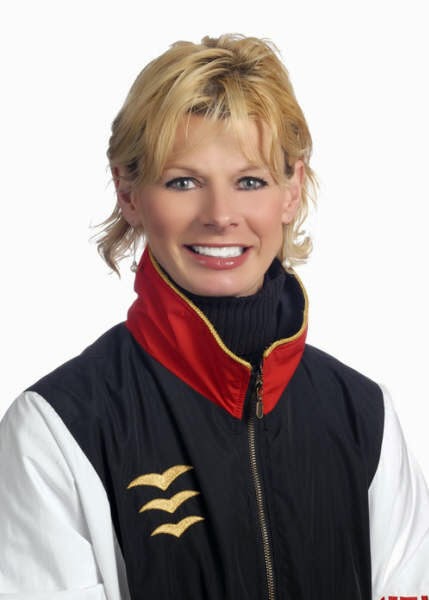 With over thirty years of coaching experience under her belt coaching the best of the best - including Elvis Stojko, Jennifer Robinson, Steven Cousins, Takeshi Honda, Jeffrey Langdon and Alaine Chartrand - Michelle Leigh is really without question one of Canada's top coaches. A recipient of the Queen's Diamond Jubilee Medal in 2013, Michelle has worked with skaters from over twenty countries and is now the Director Of Competitive Skating at Ontario's Oakville Skating Club after focusing her coaching at the Mariposa Club for many years. As part of Skate Guard's Canada Month, I think it was only too important that I had chance to speak with one of Canada's greatest skating coaches and Michelle was an absolute pleasure to interview. We talked about what inspires her, her own skating career, coaching under the IJS judging system and much more in this interview I think you'll just love:

Q: You have thirty three years of coaching experience and in that time, you've worked out of the Mariposa School Of Skating and coached at three Olympic Games, fourteen World Championships and thirty Canadian Championships. I'm sorry... but that's incredible! Just saying. The list of students you've coached has been like a who's who of skating - Elvis Stojko, Yuna Kim, Takeshi Honda, Jennifer Robinson, Steven Cousins and even so many other great skaters who have gone to successful coaching careers of their own like Jeff Langdon, Ben Ferreira and Peter Johansson. I know this isn't an easy question, but if you look at of thirty years of coaching, what moments have stood out as just being the most magical - the moments you look back at and go "wow"?

A: Well, I think as a coach the most memorable moments are the tough times or when you see someone who hasn't had an easy go of things that finds a way to become successful achieve their goals because you know what has gone into all of it. I have a lot of admiration for a skater like Elvis Stojko who won two Olympic medals, three World titles and seven Canadian titles and did it against odds when there were so many people who said it couldn't be done. That impressed me a lot. Then I look at someone like Jennifer Robinson, who moved away from home and had such a hard time with being homesick. It was really difficult for her. She was crying every day but saying "I want to stay". It was so hard for her but she achieved her goals. When she finished seventh at the Olympics... wow! To me that was SO impressive. Then there's someone like Takeshi Honda. He was SO young when he came to North America and didn't speak any English. People really do this for their dreams. I have a lot of admiration for that.

Q: As a skater yourself, you won the bronze medal at the novice level at the 1977 Canadian Figure Skating Championships in Calgary. What are your memories of this competition and what can you share with us about your own skating career?

A: I would say that I loved to train, jump and show off but I had very little in the way of mental skills to compete. I think that's what I took from my own experience of not being able to put out what I could do practice. I had no mental strategy, no training, no help in that sense. I think because I was so lacking in that area, I was always very conscious of helping people in that sense so that they could really compete. My own competitive experience was just so helpful in that way. I ruptured my Achilles at sixteen and all of those Olympic dreams that I had in my head were devastated but it was a blessing in disguise that I injured myself. I feel I'm a better coach than competitor.

Q: Doug Leigh (who coached Brian Orser as well) has also really been your partner in coaching as in life over the years. How did you keep your home life and work life separate and not 'bring skating home with you'? Is that even possible for a coach?

A: Doug and I haven't been married for six years. We're great friends. Our son is twenty three; he was eighteen when we separated then divorced. There was never any issue at work, if anything things got better with the two of just having a working relationship. When we were married, I can't say skating didn't come home with us. I don't think you can't have it come home with you when you are coaching on an elite level. You kind of live it 24/7. We were lucky our son was involved in hockey and lacrosse and through road trips for sports, our son was really our social life. I still coach in Barrie but I'm actually the Director Of Competitive Skating in Oakville now. It's a really progressive club and it's a wonderful environment. It was a great opportunity to try something on my own. It's been awesome. I'm working seven days a week right now but that's by choice.

Q: How difficult was transitioning from coaching under the '6.0 system' to under the current IJS system - particularly in working with so many skaters that really learned to skate one under one system and had to reinvent themselves under another?

A: I think it's a lot better to coach under this system. It was really tough when we were coaching Elvis for example and he doesn't medal and you don't know... how do you help? How do you explain it to a skater? Now, you kind of know how to explain the results to the athletes and to families more easily with things on paper. You take the hints from the feedback from the judging system. I like it in a way, however I'm worried they're getting carried away with making spins harder and harder for example. It feels like you're always trying to figure out the system and you lose time and money instead of working on important things like quality and speed. You'll never get the quality of skating people want to watch under this system because it focuses on manipulating instead of developing. I'm a little afraid that they keep making it more complex. It's scary for the future. How much money and time is being spent on insignificant developments?

Q: Adelina Sotnikova, Yuna Kim, Carolina Kostner in Sochi... what do you think about all that jazz?

A: I don't know I have a good answer for that. I don't watch a lot of skating on TV and I already knew the results before I watched all three of them skate. I know most people were really upset about the results so I was actually I guess impressed that Adelina Sotnikova's skate wasn't as bad as people were saying. I think they're all fabulous and have different strengths. I'd really like for the athleticism to stay in the sport. The jumps should always be worth the most. If they are just spinning or skating an edge, how exciting is that going to be for people to watch? I sure have a lot of admiration for Yuna Kim though. She makes everything look SO easy.

Q: One of the perks of coaching so many international skaters is the travel! Of all of the places you've visited over the years, what was your favourite? What's one place you've never visited that you've love to?

A: I have been so lucky when it comes to travelling. I went to my first international competition in Sapporo when I was nineteen. My bucket list is probably just to stay home and spend some time because I've been so busy with work. I don't travel as much anymore, but I still do. I really enjoy capital cities - Ottawa, Paris, London, Washington, Prague - it's just beautiful! I think capital cities tend to have a focus on history which I really enjoy. There's no real place I'm really wanting to go aside from spending some time at home.

A: I think I'm going to have to go back to my first answer. The skaters who came to the rink side on crutches and came to rehabilitate themselves... You know, I'm more attached to the whole journey than the finished product because of living it with so many people. Skaters who come to a lesson everyday and can't wait for that lesson and give 100% every time... they're wonderful! It really is a gift to be a coach. I treasure those relationships, when they have respect for the relationship and skating.

A: Most people probably don't know I qualified for and ran the Boston Marathon five times. I also got academic scholarships from U Of T, Western University and Queens. I was a real brain in high school!

Q: What's the biggest lesson that your students have taught you?

A: I think I would have to say that everyone is different. There's no one way to teach everyone. You have to treat them the way they want to be treated - it's kind of the opposite of the Golden Rule in a way I guess. I think that's the main thing. You have to get to know a person to get the most out of them and how to push their buttons a little I guess.

Skate Guard is a blog dedicated to preserving the rich, colourful and fascinating history of figure skating. Over ten years, the blog has featured over a thousand free articles covering all aspects of the sport's history, as well as four compelling in-depth features. To read the latest articles, follow the blog on Facebook, Twitter, Pinterest and YouTube. If you enjoy Skate Guard, please show your support for this archive by ordering a copy of figure skating reference books "The Almanac of Canadian Figure Skating", "Technical Merit: A History of Figure Skating Jumps" and "A Bibliography of Figure Skating": https://skateguard1.blogspot.com/p/buy-book.html.
Posted by Skate Guard Blog at July 22, 2014
Email ThisBlogThis!Share to TwitterShare to FacebookShare to Pinterest
Newer Post Older Post Home