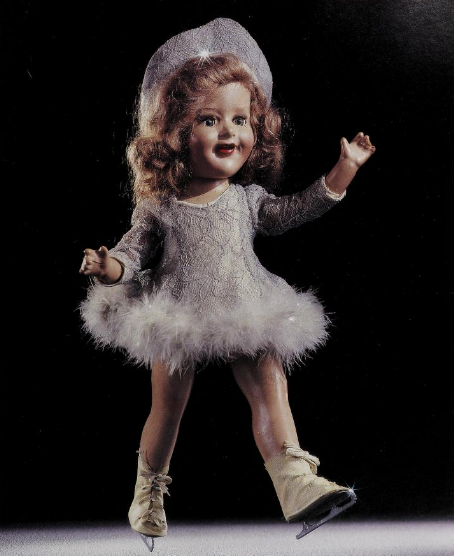 
Four time Canadian Champion, two time World Champion and 1948 Olympic Gold Medallist Barbara Ann Scott was honestly nothing short of a national treasure and was described by the newspapers of her day "a tiny exquisite doll". To this day, she is the only Canadian ladies skater to win Olympic gold and throughout her amateur and professional careers and later life she was a complete class act... someone I would have really loved to have met. That said... many young girls and fabulous boys who never met Scott in person got to welcome her company in their homes every day because in the late 1940's and 1950's, if you didn't have a Barbara Ann Scott doll you might as well just have thrown in the towel right there and then. 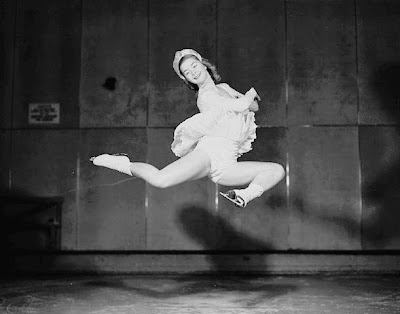 Back in a time where many young ones played with paper dolls, the U.S. based Madame Alexander doll company owned by Beatrice Alexander had marketed a very popular Sonja Henie doll in the late 1930's. Figure skating was immensely popular in North America at the time and it was no wonder a doll in the likeness of the three time Olympic Gold Medallist and skating diva caught on. After Barbara Ann Scott's win at the 1948 Winter Olympics in St. Moritz, Switzerland, Reliable Toy Company marketed a doll in Scott's likeness... and it caught on even more than Henie's!

The Toronto company that became the Reliable Toy Company was founded in 1920 and was originally named the Canadian Statuary and Novelty Company. By 1935, they were the largest toy company in the British Empire and they're even still in operation today. The composition Barbara Ann Scott doll was designed by popular doll maker Bernard Lipfert, was fifteen inches high and according to the Museum Of Vancouver was "made of a mixture of glue and sawdust, which created a more durable material than bisque (or porcelain). The doll has a moveable head, arms, and legs. She has sleeping blue eyes, an open smiling mouth. Her skates and headband are original; but her skating costume is not. The doll, which sold well until 1954, came with a hangtag shaped like an ice skate, a letter from Barbara Ann, a pair of shoes and a small book about the skater." The Canadian Museum Of History further explains that "in 1948, it wore a lace skating costume trimmed with marabou. A new costume was created each year and was always trimmed with marabou." According to Jim Trautman's article "The Barbara Ann Scott Skating Doll", "though the doll was always composition, her skating outfit did change. In 1948, the first doll wore a blue lace skating outfit trimmed with maribou feathers, a pearl coronet had and figure skating boots - the boot type which can be taken off, put back on, and laced up. The metal skate blades are attached to the bottom of the skate boots with little rivets. The other unique item is a small skate tag which hung from her hand. It reads 'Barbara Ann Scott' (printed in red), then 'Doll' (printed in blue) and then 'Barbara Ann Scott' again (again in red). On the skate blade, 'Reliable Toy company Limited, Toronto' is printed in red. The 1949 version wears a blue costume and a tiara. The 1950 version also had a hat and a velveteen skating costume. It should be noted that each of the costumes was nicely trimmed with marabou feathers. The 1951 Barbara Ann Scott wears a blue outfit with gold dots and the marabou trim. A second version is pink with gold dots. As befits an outfit for skating in the cold outdoors, all of her costumes are long-sleeved. The doll's box is not elaborate. On the side panel is printed 'Barbara Ann Scott Doll' with the Reliable Toy Company information. On the right side of the label panel is Barbara Ann Scott in a skating pose, looking up. The label also has the colour stamped on it."

During the period the doll was sold sales skyrocketed and it was on the top of many young people's Christmas lists but due to the delicate nature of the doll's 'ingredients' as it were, although many Barbara Ann Scott dolls survive in museums and private collections, a lot of the ones you'll find at antique shops will have deteriorated or cracked in time unless they were kept in mint condition, which is a real shame.

I absolutely love that Allison Manley was able to interview Barbara Ann for The Manleywoman SkateCast in 2010 and am completely jealous at the same time! It was most probably the last full length interview she gave before her death two years later. Laughingly, Barbara Ann said "when we were married, Tommy had never seen one, so I said, it’s a ratty-looking doll with marabou around the bottom. So yes, we have one. And several years later they made another edition." Barbara Ann wouldn't be the only Canadian ladies skater to have a doll made in her likeness - Regal Toys produced a plastic Karen Magnussen doll and Star Dolls and Distinctive Doll of Canada made a Liz Manley doll - but Scott's is without question the most popular doll made in a skaters likeness, certainly here in Canada at least. I think we should continue the tradition with a Joannie Rochette doll, don't you? It would really be rude not to.

Skate Guard is a blog dedicated to preserving the rich, colourful and fascinating history of figure skating. Over ten years, the blog has featured over a thousand free articles covering all aspects of the sport's history, as well as four compelling in-depth features. To read the latest articles, follow the blog on Facebook, Twitter, Pinterest and YouTube. If you enjoy Skate Guard, please show your support for this archive by ordering a copy of the figure skating reference books "The Almanac of Canadian Figure Skating", "Technical Merit: A History of Figure Skating Jumps" and "A Bibliography of Figure Skating": https://skateguard1.blogspot.com/p/buy-book.html.
Posted by Skate Guard Blog at December 27, 2014
Email ThisBlogThis!Share to TwitterShare to FacebookShare to Pinterest
Newer Post Older Post Home