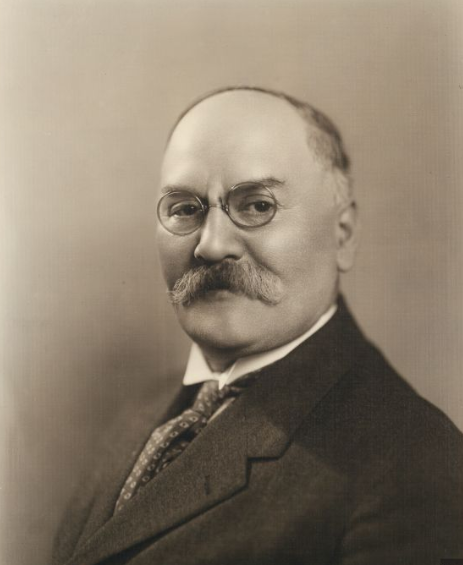 Born September 23, 1861 in Montreal, Québec, Louis Rubenstein went on to undoubtedly become one of the most influential and important figure skating pioneers. His parents, Max and Leah Rubenstein, had emigrated to Canada from Poland eleven years before his birth, and were one of only roughly two hundred Jewish families living in the city at the time. Louis' first introduction to the sport came in 1864, when Jackson Haines came to the city to give his final North American performance before heading to Europe to spread the gospel of skating there. He would have been only three years old at the time. Inspired by Haines' performance, Louis took to the ice and soon joined the highly esteemed Victoria Skating Club and skated alongside his brothers Abraham and Moses. You might say the success that was honed by Louis and his brothers was of biblical proportions. Sorry to be punny there, but I couldn't resist. As a teenager, he actually travelled to Vienna to train under Haines for a spell, and when returning took the lessons from one master and like Haines, spread the word to the masses in Montreal. 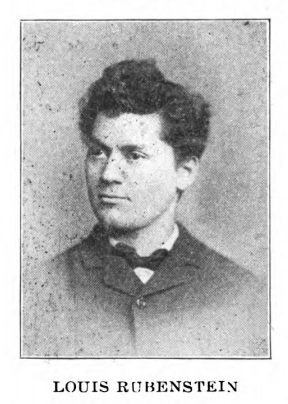 Although Louis was quite well respected by his peers for his excellence in school figures, he lost by exactly one hundred points in his first recorded competitive appearance in 1879 to older competitors Messrs. Periera and Barlow. He rebounded to win his city's championships and in 1883 won his first unofficial Canadian title (unofficial because there was no official national governing body of skating regulating competitions yet, but we'll get to that later) at his home rink. As early as the following year, Louis was invited to participate in a series exhibitions and competitions in Atlantic Canada including stops in Saint John, Bathurst, Chatham, Moncton and Halifax. A poster advertising his 1884 appearance in St. Stephen, New Brunswick described his appearance as "the event of the season". Louis held court at the national competition in Canada for seven consecutive years in the 1880's and also garnered considerable attention at the Montreal Winter Carnival, of which skating was an important component. He won five North American titles as well, starting in 1885 and two U.S. Championships in 1888 and 1889. His travels during that decade took him everywhere from New York to Detroit to Vermont to Picton, Ontario. How did he find the time to do it all? Although Louis was a partner in the family business, which was a silver, gold and nickel plating and manufacturing firm, it appears his role might have been more on paper than in getting hands-on as he would have required significant time to travel in the winters from event to event for weeks or months at a time. He was a bachelor though, very much married to his work on the ice... and he was lauded as North America's best skater in newspapers everywhere. 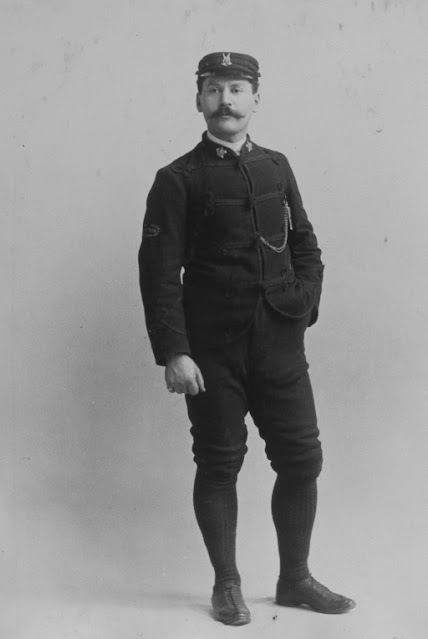 Photo courtesyMusée McCord Museum. Reproduced for educational purposes under license permission.
Why settle for the best in North America? By the end of the 1880's, Louis was eager to take on the rest of the world. Kevin B. Wamsley and Don Morrow's excellent book "Sport In Canada: A History" offers a great explanation of just how he came to compete against the world's best: "When news of the St. Petersburg (Russia) 'world' championship - staged to commemorate the twenty-fifth anniversary of the St. Petersburg Skating Club - reached Montreal in mid-December 1889, the choice of the most appropriate and deserving representative to be sent by the Amateur Skating Association of Canada was a foregone conclusion. Four hundred dollars was raised to defray Rubenstein's expenses. In early January 1890, he boarded the Cunard Royal Mail steamer Etruria in New York carrying letters of introduction from Canada's Governor-General, Lord Stanley, to the foreign office and the British ambassador in St. Petersburg". Knowing full well that under the czarist rule in Russia, anti-Semitism was alive and thriving, Louis wasn't exactly expecting to be welcomed with open arms when he arrived in Russia. Gay skaters in Sochi, anyone? I digress. What he was walking into was such a shitshow that even the December 30, 1889 edition of the Montreal Gazette wrote prior to his departure that "our skaters can now wait confidently for the cablegram that shall inform us the redoubtable Louis has either carried off the championship in triumph or is snugly incarcerated in the Trubetskoi Bastion." Oh good. 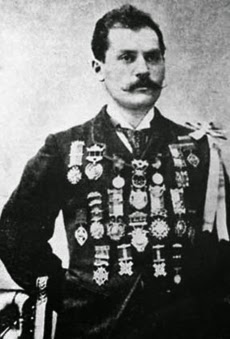 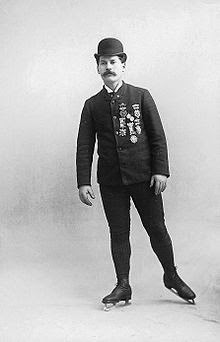 Although the voyage over the Atlantic was smooth sailing, what happened when Louis arrived wasn't. He checked into the Grand Hotel d'Europe and within a few days found himself summoned to the cop shop. He was interrogated and asked if he was Jewish. Responding yes, his passport was seized but he was released. Returning to practice, he was hauled back into another police station days later and told to leave the country within twenty four hours. The reason? "We cannot permit Jews to remain in St. Petersburg". Louis plead his case to the British Ambassador Sir Robert Morier, who returned his passport with the words "British Subject" crossed out and replaced with "L. Rubenstein, Jew". He was advised to compete in the World Championships but leave the country immediately thereafter. 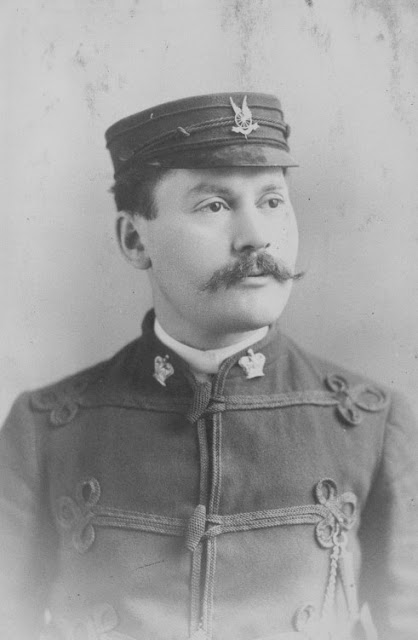 Skate Louis did... in front of members of the very Emperor who opposed him (Alexander III)'s court. Part of the competition, which included school figures, special figures and specialties was won by the outcast from Canada. In winning a gold medal, he defeated skaters from Austria, Sweden, Norway, Finland and Russia. He explained his experience in letters home that were published in Montreal newspapers: "Instead of what we call our list in Canada there are three separate competitions in Russia. The real figure skating or what we call list skating goes under the name diagram skating in Russia. There are two other departments - special figures and specialties - and in these there is a tendency to acrobatic work, which would not be recognized as fine skating in Canada." Safely returning home to Montreal by way of New York, Louis retired from the sport in 1892 after capping off his career with another U.S. title for good measure. 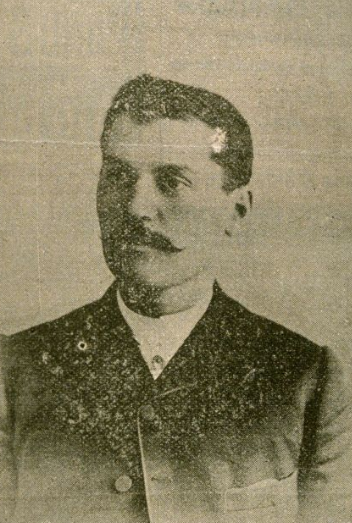 Photo courtesy Bibliothèque et Archives nationales du Québec
Every bit as important to his on ice contributions to skating were Louis' off-ice ones. He was made honorary secretary of the Amateur Skating Association of Canada and would later serve as its president. He was instrumental in forming the International Skating Union of America as well and also presided over that organization. Just incredible if you ask me. 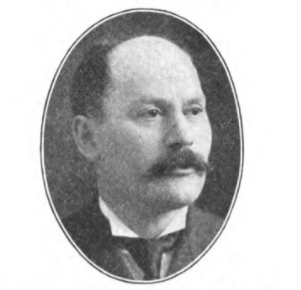 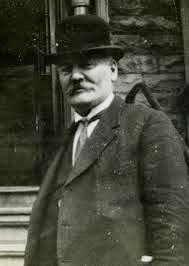 Think his story ends there? Guess again sweetie. During the summers Louis was competing as a skater, he was an avid and quite successful cyclist. He became the president of the Canadian Wheelman's Association for eighteen years and was the man behind the success of the 1899 World Bicycle Meet which was awarded to Montreal. He bowled, played billiards, curled and was president of the Canadian Bowling Association, Montreal Athletic Commission, the Montreal branch of the Royal Life Skating Society, Montreal Amateur Athletic Association and Young Men's Hebrew Association. He was even a city alderman for seventeen years. He undertook the sale of the family business in 1929 and it remains in operation today. How this man found time to sleep is beyond me. Posthumously, Louis was recognized by inductions into the Canadian Sports Hall Of Fame, Jewish Sports Hall Of Fame in Israel, World Figure Skating Hall Of Fame and Skate Canada Hall Of Fame.
A 2004 article from the "Canadian Jewish News" also noted, "He was a populist politician who took an interest in the welfare of the poor. His decision to establish the Rubenstein Bath was of no small importance to poverty stricken Montrealers who lacked something so basic as running water.
A keen politician, Rubenstein sometimes filled in as mayor... His funeral attracted thousand of mourners. Several years after Rubenstein's passing, a group of well-heeled Montrealers raised about $2,000, no insignificant sum during the Depression, for a fountain in his memory. It was finally erected in 1937... The fountain is the only public monument in Montreal, and perhaps in Quebec, honouring a Jew." 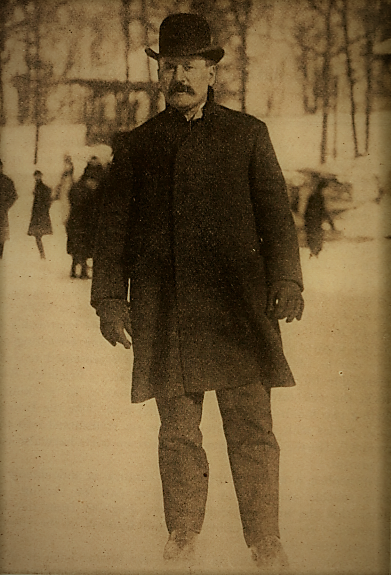 Louis' death on January 3, 1931 marked the end of an era and the beginning of another. Only two years later in August 1933, the Christie Pits Riot broke out in a Toronto playground after a baseball game six months after Adolf Hitler took power in Germany. An account in the Toronto Star described the event: While groups of Jewish and Gentile youths wielded fists and clubs in a series of violent scraps for possession of a white flag bearing a swastika symbol at Willowvale Park last night, a crowd of more than 10,000 citizens, excited by cries of 'Heil Hitler' became suddenly a disorderly mob and surged wildly about the park and surrounding streets, trying to gain a view of the actual combatants, which soon developed in violence and intensity of racial feeling into one of the worst free-for-alls ever seen in the city. Scores were injured, many requiring medical and hospital attention... Heads were opened, eyes blackened and bodies thumped and battered as literally dozens of persons, young or old, many of them non-combatant spectators, were injured more or less seriously by a variety of ugly weapons in the hands of wild-eyed and irresponsible young hoodlums, both Jewish and Gentile". Less than a decade later, young Jewish diarist and skater Anne Frank would face her end in the Bergen-Belsen concentration camp during The Holocaust. Louis' work in fostering a better sporting world would not be for nought though. At the fountain in his honor in Fletcher's Field in Montreal, the water still flows. The water reminds one of Louis' resolve in life to flow on and on despite the hate he himself experienced in his trip to Russia and in the winter it freezes into ice, the very surface he changed the skating world upon.

Skate Guard is a blog dedicated to preserving the rich, colourful and fascinating history of figure skating and archives hundreds of compelling features and interviews in a searchable format for readers worldwide. Though there never has been nor will there be a charge for access to these resources, you taking the time to 'like' on the blog's Facebook page at http://www.facebook.com/SkateGuard would be so very much appreciated. Already 'liking'? Consider sharing this feature for others via social media. It would make all the difference in the blog reaching a wider audience. Have a question or comment regarding anything you have read here or have a suggestion for a topic related figure skating history you would like to see covered? I'd love to hear from you! Learn the many ways you can reach out at http://skateguard1.blogspot.ca/p/contact.html.
Posted by Skate Guard Blog at January 04, 2016
Email ThisBlogThis!Share to TwitterShare to FacebookShare to Pinterest
Newer Post Older Post Home