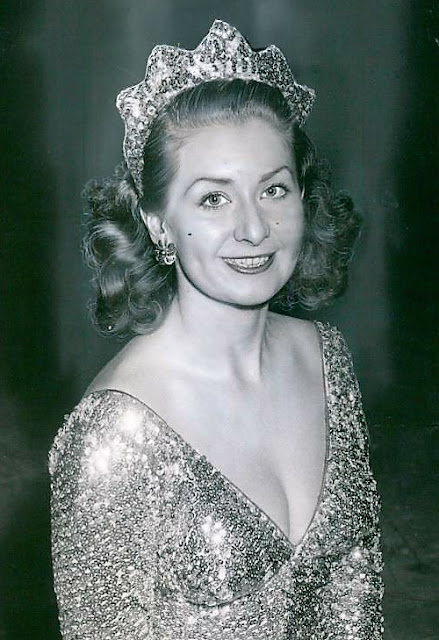 In the thirties, elephant charms were all the rage in England. A young Daphne Walker started collecting them and at age eight started wearing a small green elephant talisman for good luck. She collected over three hundred elephant ornaments over the years and the funny thing is, in learning about her story it was clearly talent and hard work - not luck - that brought her to the European and World figure skating podiums both before AND after World War II. 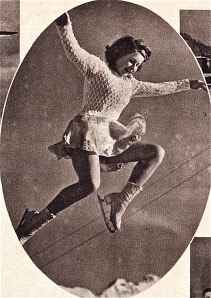 According to BIS historian Elaine Hooper, sport was in Daphne's blood: "Her grandfather was President of Britain's Amateur Boxing Association and her father an expert marksman."  At age ten, she competed at an international event for European junior skaters in St. Moritz, Switzerland and finished third. In 1936, a then eleven year old Daphne caused a stir in the media when her participation at the British Championships changed the event's schedule and caused London County Council lawmakers to ponder their laws. At the time, there was a section of law in England called the Young Children and Persons Act which forbade young people to give public exhibitions after 7 PM unless it was for charity. In order to circumvent the rule, organizers waited until midnight (which technically was considered the morning of the next day) to allow her to be seen by the judges. According to the May 7, 1936 edition of The Sydney Morning Herald, "The difficulty was surmounted by allowing Daphne to skate at midnight, when there were no general spectators. The orchestra, which had played for her rivals earlier in the evening, was silent, but someone was found to play the piano while the young champion performed for the judges." She finished seventh at the British Championships that year and gained a fan following in Sydney, Australia, when she travelled there on vacation and gave skating exhibitions with World Professional Champions Sadie Cambridge and Albert Embers. Daphne also travelled to South Africa, where she was the very first person to skate on the new ice rink in Johannesburg.

In 1938, Daphne made a statement at the Wembley Empire Pool and won the senior bronze medal behind Cecelia Colledge and Megan Taylor at the British Figure Skating Championships. According to an article in the January 6, 1938 edition of The Sydney Morning Herald, "The surprise of the evening was thirteen-year old Daphne Walker, who was third to Miss Colledge and Miss Megan Taylor. For free skating she obtained more marks than Miss Taylor. Following her brilliant display, Miss Walker - she was the only competitor to obtain double six (full marks) for both difficulty and execution - was chosen to represent Great Britain in the European championships at St. Moritz, in January and the world championships in February". At the time, Colledge and Taylor were 1-2 in the world, so a thirteen year old coming out of nowhere and giving them a run for their money was certainly a narrative that wasn't expected at the time. Although she wasn't able to duplicate her prodigal success at the 1938 European or World Championships (she placed tenth and seventh at those events), she did start a ball in motion that would set her up for better things the following season.

In 1939, Daphne again medalled at the British Championships. This time she was able to back up that success internationally. She won an international competition in Budapest, Hungary and  placed third behind Colledge and Taylor at the 1939 European Championships and at the 1939 World Championships (which for female skaters was held in Prague), she finished third to Taylor's first, defeating twelve other skaters from around the world in the process. In 1939 alone, she travelled to Oslo, Berlin, New York and Boston to participate in ice carnivals, an incredible feat considering the challenges in travel and the fact war broke out that year. 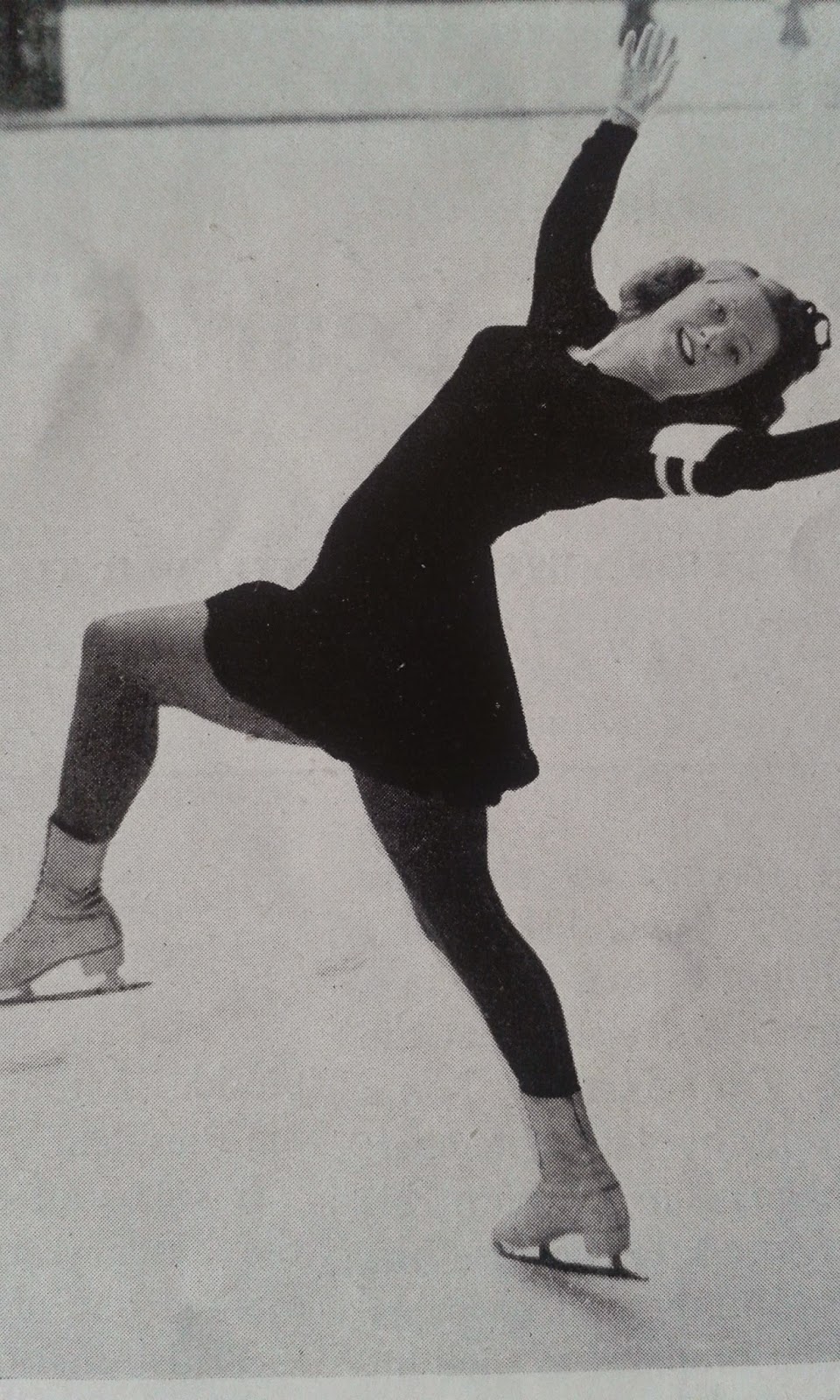 As expected, World War II put Daphne's skating career on hold. During the war she was a domestic science (cookery) student in Cheltenham which she followed up by taking a shorthand typing course in Kensington. For three years she worked in a clinic in Camden Town, London. We do know, however, that she did manage to get someskating in... literally while the bombs were dropping. In 1940, she participated in a charity skating gala in Scotland supporting the City Of Glasgow War Relief Fund. During this period, she trained at the Richmond Ice Rink and was a student of the late Arnold Gerschwiler. During World War II, Arnold Gerschwiler was called upon to serve in the Swiss  and he married fellow skater Violet Blundell. He undertook fire-watching duties during the war and was at the Richmond Ice Rink when a two thousand pound bomb landed in the rink's engine room. Fortunately for Gersch, Daphne and the rink, it did not explode.


After the war, Daphne returned to competitive skating with a big bang, winning her first and only British title at Wembley in 1947. Of particular note (considering the coverage that she got in Australian newspapers following her visit) is the fact by after the War Australian skaters such as her competitor Patricia Maloney were competing at the British Championships.

Daphne went on to win the bronze medal at the 1947 European Championships behind Canada's Barbara Ann Scott back when North Americans were allowed to participate and then finished second behind Scott at the 1947 World Championships in Stockholm, Sweden. She thought highly of her Canadian rival. In a 1948 edition of "World Sports", an official magazine of the British Olympic Association, she said "Personally, I rate Miss Scott's chances at St. Moritz highly. Last year, her closest competitors for the European and world titles were Gretchen Merrill of the United States and myself. Fine skater though Gretchen is, I do not expect her to reverse her position." 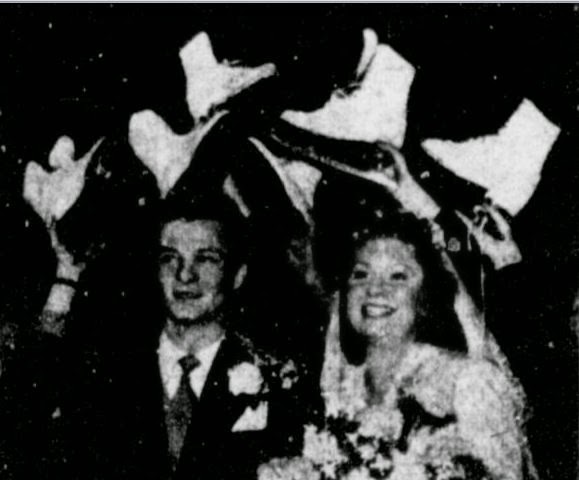 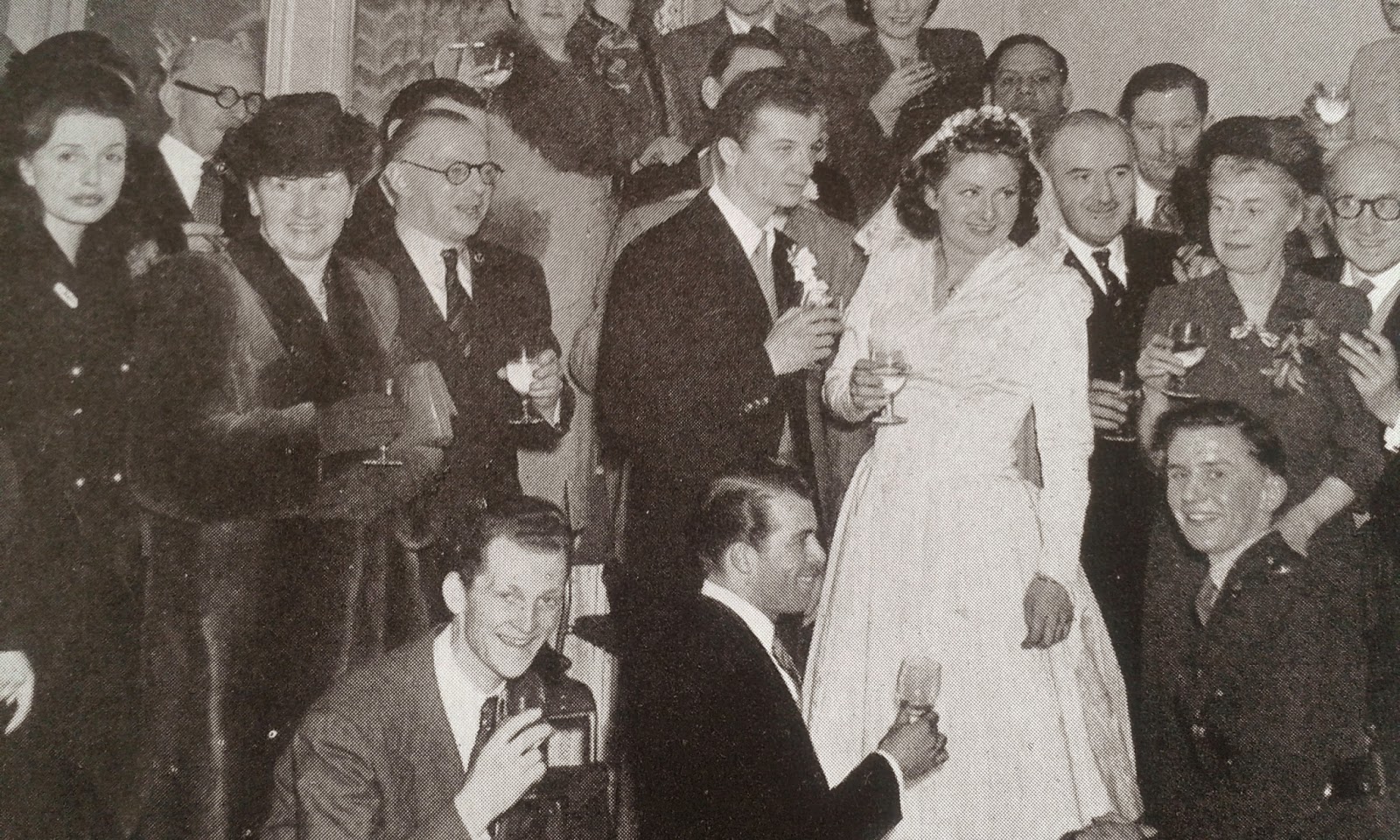 Walker and Keefe on their wedding day

After her dazzling comeback, Daphne retired from amateur competition and married Detroit ice comedian Bill Keefe (of the skating trio The Three Rookies) in London, England on January 17, 1948. They had met after she signed a contract and started skating professionally in Tom Arnold's "Hello, Ice" show at the Brighton Sports Stadium. She also starred in another one of Arnold's productions at the Stoll Theatre. 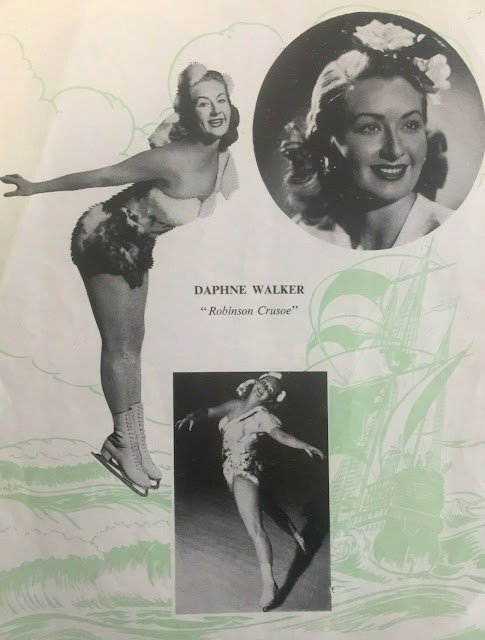 Daphne then came to America and toured in the road company of the Voorhees-Fleckles production of "Ice Varieties" which played at the 1950 Chicago Fair. She also skated alongside Heine Brock in Tom Arnold's production of "Dick Whittington On Ice" which toured England in the fifties.


Daphne was very popular and was always trying new sports. She even gave motorcycle speedway racing at Wembley a go, which was certainly not a sport women of that era generally competed in. She gave talks to children's groups and presented them with prizes for road safety. She even played tennis on ice!


Not much is known about Daphne's life following her amateur career aside from the fact she now lives in Switzerland and as recently as November lived in Durban, South Africa. We do also know that the impression that this precocious young skater made on Australian figure skating in particular after her visit at a time when skating in Australia was just growing is of particular interest, as is the story of her determination to get out there and skate in 1936, even if it was at midnight... and that her lucky elephant talisman may just have been the secret to her success.


Skate Guard is a blog dedicated to preserving the rich, colourful and fascinating history of figure skating and archives hundreds of compelling features and interviews in a searchable format for readers worldwide. Though there never has been nor will there be a charge for access to these resources, you taking the time to 'like' the blog's Facebook page at http://www.facebook.com/SkateGuard would be so very much appreciated. Already 'liking'? Consider sharing this feature for others via social media. It would make all the difference in the blog reaching a wider audience. Have a question or comment regarding anything you have read here? Have a suggestion for a topic related to figure skating history you would like to see covered? I'd love to hear from you! Learn the many ways you can reach out at http://skateguard1.blogspot.ca/p/contact.html.
Posted by Skate Guard Blog at March 04, 2015
Email ThisBlogThis!Share to TwitterShare to FacebookShare to Pinterest
Newer Post Older Post Home