He Had It Coming: Yvonne de Ligne, The Seventh Merry Murderess 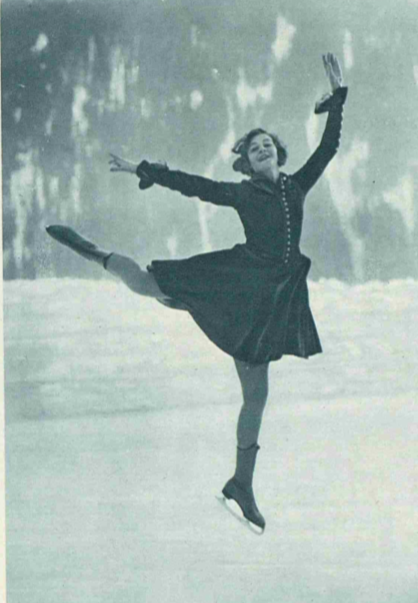 Liz's husband Bernie liked to pop - not chew - his gum and it irritated her so much that she took the shotgun off the wall and fired two warning shots... into his head. Annie was dating a man named Ezekiel Young from Salt Lake City and found out he actually had six wives so she poisoned him with arsenic. June's husband Wilbur accused her of screwing the milkman and met his demise by running into her knife ten times. Hunyak, a Hungarian ballerina, didn't speak a lick of English but one thing was for sure. She wasn't guilty. Velma caught her husband and sister sleeping together. That didn't go so well for either for them. Mona's boyfriend Alvin Lipschitz cheated on her with both men and women. In the end, he met his end as the result of artistic differences: he saw himself alive and she saw him dead. Those six merry murderesses of the Cook's County Jail could have easily been joined by another murderess who loved to perform - figure skater Yvonne de Ligne.


Before we talk about what she did, let's talk about who she was. Born September 19, 1907 in Brussels, Belgium as Yvonne Geurts, she grew up in an affluent Brussels family and made her international debut as a competitive figure skater in Budapest, Hungary when the 1929 World Figure Skating Championships for women were contested. The first ladies singles skater from Belgium ever to compete at the World Championships, she finished in last place almost seventy two points behind the winner who was of course Sonja Henie. Success was slow and fleeting for the Belgian skater. Her best results were sixth place finishes ahead of future World Champions Cecilia Colledge and Megan Taylor at both the 1932 Winter Olympics and World Championships and a fifth place at the 1933 European Championships. That same year, she slipped to eighth place in a field of nine at the World Championships. By her final competition, the 1936 World Championships, she was one of the older competitors in the field and had dropped to eleventh place. de Ligne was certainly a skater who had her up's and down's but not one who in hindsight is well remembered historically. 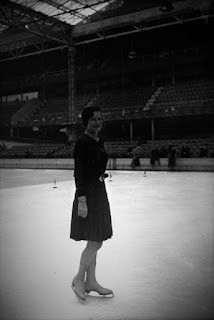 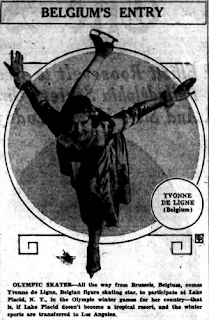 For her skating, that is. A teenage bride, Yvonne was the wife of Belgian speed skater Charles de Ligne, who was a decorated World War I cavalry officer and owner of a successful seed business. His sporting career wasn't exactly as impressive as his wife's though; his dismal times from the 1936 Olympics in Germany gave him the unique distinction of being the slowest speed skater in Olympic history. It's a shame too, because maybe if he was a little faster he might have had the sense to get away from his wife. During World War II, the married couple had been leaders of the Belgian underground during the Nazi occupation, helping smuggle hundreds of Allied fliers, downed over enemy territory, and Allied secret agents to getaway boats in the English Channel. Behind closed doors however, the marriage of the two skaters was turbulent at best.

Yvonne fell in love with a Dutch figure and speed skater coaching figure skating at a club in Antwerp, Belgium named Jacob Hartog. While her husband was away, de Ligne moved Hartog into the couple's second home... because that's a great idea, right? Charles returned from a dangerous underground mission to the couple's suburban 'getaway cottage', found Yvonne and Jacob living there, there was a scuffle and Charles kicked Jacob out. Shocker, right? Not so much. Yvonne, then forty two, had developed an obsession for Jacob (who was ten years her junior) and was furious that her older husband put a stop to her live-in affair. Much like the merry murderesses of the Cook County Jail, was out for blood. In November 1944 she decided to do something about her little problem. 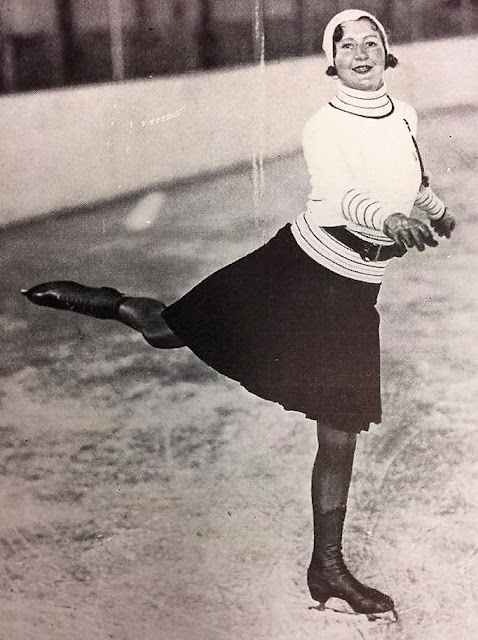 Ellery Queen's April 7, 1957 true crime article "Murder In The Underground" explained that "she knew that if passion stood out as the motive, she would be the obvious suspect. So she set about creating a false motive that would send the police off on a wild-goose chase. This woman built her false motive out of nothing less than a world war. In fact, out of the war Yvonne de Ligne manufactured two false motives, so that, if one failed, there would still be another between the police and the truth. The time was November, 1944... In this climate Yvonne de Ligne set her trap for the Belgian police. She was in a unique position to do so. She and her husband Charles were national heroes... One of the underground with whom the de Lignes had worked against the Germans was a chemist named Timmermans. Yvonne went to Timmermans and confided in him that Charles, her husband, was 'anti-Belgian' and was using his underground connections to betray honest patriots to the Gestapo. Timmermans was deeply disturbed. He could not believe that de Ligne was a traitor, but here was the man's own wife accusing him. The chemist decided to send her to see one of the most dreaded of Belgium's underground operatives, Armand Michiels, who specialized in executions of traitors. On the afternoon of November 14, 1944, Yvonne and Charles de Ligne cycled out of Brussels to their little love nest. Shortly after 7 pm Armand Michiels entered the cottage and pumped five bullets into de Ligne's heart -convinced that Charles had betrayed Belgium. It was not true. Convincing Michiels that it was, so that if the executioner were caught he might convince the authorities, had been merely one of Yvonne de Ligne's red herrings. The other Yvonne offered to the police in person, after the shooting - she suggested that her husband might have been slain by an agent of the Gestapo! It seemed plausible. During the occupation the Gestapo had suspected de Ligne's underground activities, but they had never been able to catch him at work. The fact that the killing had been done with a German Luger seemed a confirmation. What the police did not know at the time was that Yvonne had given Michiels 3,500 francs to purchase a German-made weapon. But the cleverest criminal plans have a way of collapsing under competent police investigation and the criminal's own carelessness. By the spring of 1945 Yvonne was openly and gaily consorting with Jacob Hartog. The police raided his rooms and found a bundle of love letters to Hartog from Yvonne, with damaging dates and other evidence of their illicit love affair. Timmermans was questioned and his testimony led to Michiels. And Michiels confessed to the killing." 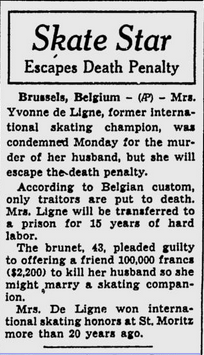 Michiels was sentenced to a fifteen year term in jail. As noted in the April 1, 1946 clipping from The Milwaukee Journal above, Yvonne, the real mastermind behind the cold-blooded murder, escaped the death penalty. She was instead sentenced to life in prison. For his knowledge of his lover's plot, Hartog was sentenced to a three year term but was released after a year because of advanced tuberculosis and died shortly thereafter. Six years into de Ligne's term, she too was released and died of tuberculosis in 1952. Three skaters, one murder and a plot every bit as bizarre (if not moreso) than the 'whack heard around the world' when Nancy Kerrigan was attacked in 1994, don't you think? One thing's for sure, unlike de Ligne and the six merry murderesses of the Cook's County Jail, if I'd been there, if I'd have seen it, I would NOT have done the same.

Skate Guard is a blog dedicated to preserving the rich, colourful and fascinating history of figure skating and archives hundreds of compelling features and interviews in a searchable format for readers worldwide. Though there never has been nor will there be a charge for access to these resources, you taking the time to 'like' on the blog's Facebook page at http://www.facebook.com/SkateGuard would be so very much appreciated. Already 'liking'? Consider sharing this feature for others via social media. It would make all the difference in the blog reaching a wider audience. Have a question or comment regarding anything you have read here or have a suggestion for a topic related figure skating history you would like to see covered? I'd love to hear from you! Learn the many ways you can reach out at http://skateguard1.blogspot.ca/p/contact.html.
Posted by Skate Guard Blog at June 27, 2015
Email ThisBlogThis!Share to TwitterShare to FacebookShare to Pinterest
Newer Post Older Post Home