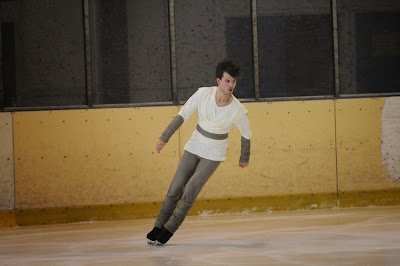 Back in April, it was my absolute pleasure to present an interview with two time Olympian Miriam Ziegler. I figured it would just be rude not to talk to the other half of this talented partnership, Ziegler's talented partner (both on and off the ice) Severin Kiefer. This twenty four year old skater, like his partner, got his start as a singles skater in Austria and actually won two Austrian junior men's titles and three senior medals without a partner before teaming up with Stina Martini and later with Miriam Ziegler. I think you're going to find Kiefer's inside view on the sport refreshing! We talked about transitioning to pairs skating, balancing an on and off partnership and updated us on the hard work he and Miriam have been doing during the off season. Enjoy!:

Q: One thing I think is so remarkable about your skating career (much like your partner Miriam) is that you have balanced both a highly successful singles and pairs career at the same time. As a singles skater, you've won eight medals at the Austrian Championships on the novice, junior and senior levels and a silver medal internationally at the Mladost Trophy in Croatia. What would you say have been the proudest and most challenging moments from your singles career?

A: First of all, thank you for doing the interview! Like you said, I had the chance to compete for Austria in many international competitions on almost every level more or less successfully. I wouldn't, however, compare my singles career to that of Miriam. My proudest moment was probably coming third at the 2008 Triglav Trophy and earning my first international senior medal just after competing in my first ISU Championships, the 2008 Junior World Championships. My most challenging time came the season after that when I couldn't seem to make any progress particularly in competition. That season had its climax in a disastrous free skate at Nationals in which I failed to land a single triple jump and was rightfully not chosen to go to Junior Worlds. I was lacking the necessary maturity to deal with the situation at the time and was seriously considering quitting figure skating until a new opportunity arose in pairs.

Q: Before teaming up with Miriam, you had an accomplished career with Stina Martini. You were three time Austrian Champions and of course competed for two seasons at both Europeans and Worlds together. What do you look back at most fondly about that time?


A: Neither Stina nor I had any prior experience in pairs skating before our coach at the time, Eva Sonnleitner, had the idea for us to try skating together. We had a massive task ahead of us, which I think we mastered fairly well, considering we were the first Austrian pairs team in over a decade and the circumstance of there not being pairs coaches in Austria. What was really helpful starting out was being able to participate in the ISU Pairs Development Camp in the spring of 2009 in Berlin where both our coach and ourselves could learn the basics of pairs skating. We ended up coming back to Berlin several times over the following seasons to get help from Rico Rex and now a full time coach of Miriam and I, Knut Schubert. We were sort of thrown into the deep end by entering the Junior Grand Prix scene right off the bat in 2009. Our first ever pairs competition was the Junior Grand Prix in Dresden in early October which was absolutely nerve wracking. Having the responsibility of another person was overwhelming for me but competing in a big event like this certainly made me stronger for challenges ahead. In the following seasons, we competed at multiple ISU Championships which was an absolute dream come true for me but at some point I realized that with double jumps, our potential was very limited. We failed to get the required technical score to qualify for the 2013 World Championships in both programs and considering the stagnation in our development, I felt that it was time to make a change.

Q: Since teaming up with Miriam, you have won another two Austrian pairs titles and had some wonderful successes internationally. What are your goals looking forward to next season and how has training been going lately?

A: We have quite a bit more time to work on new elements this off season, which we are really excited about. Last year, we had to take some time off in spring to recover from a very demanding season starting with the Olympic qualifier in September through competing and experiencing the Sochi 2014 Games and after that getting our energy back up for the 2014 World Championships in Saitama. Our goals for next season are first and foremost getting the triple twist into both programs and adding a second consistent throw triple jump to our repertoire. Training has been really exciting, as we are working on a lot of new take-offs and variations in lifts and intricate transitions between elements.

Q: How do you and Miriam balance a relationship both on and off the ice and make that work?

A: Miriam and I spend close to twenty four hours a day together and quite honestly, I wouldn't have it any other way. Our on ice relationship is very professional. We have a pretty good way of separating our on ice partnership with what we have away from skating and don't let problems that occur on the ice interfere with our relationship off the ice. We have very similar taste in music and movies, we both love to cook and just have very similar interests which is certainly a plus. 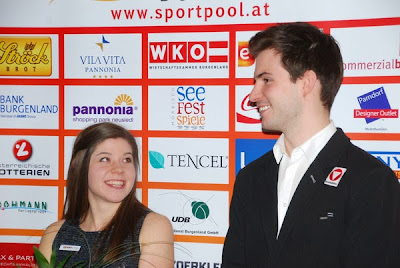 Q: The 2015/2016 season is going to be a fierce one in terms of competition. You're going to be up against of course the reigning World Champions Meagan Duhamel and Eric Radford and the Olympic Gold Medallists Tatiana Volosozhar and Maxim Trankov will be making a comeback. Throw in three very strong Chinese pairs and Stolbova and Klimov and it's shaping up to be quite a season already. How do you plan on making your mark ?

A: It's going to be absolutely fascinating how next season turns out at the top! It seems like our discipline is heading towards more and more quad throws and twists as well as more difficult side by side jumps. Like I said before, our primary goal is getting the triple twist in our programs as well as making the programs more sophisticated and interesting. We are working on a few other technical things too but I don't want to give everything away right now. Next season is probably a little early for us to be competing with the top teams you have mentioned but we are working towards being in that discussion. We're both still young, especially in terms of pairs skaters, and we know that we have potential to improve every aspect of our skating and will try and maximize that.

Q: If you could be a superhero, what would your super power be?

A: It probably would be the power of persuasion.

A: Steven Cousins is one of the most entertaining skaters I've ever seen. Growing up, I loved watching him on TV and I actually got to know him as a person when I was training in Barrie, Ontario in 2007. With there only being very few Europeans there at the time that shared a passion for soccer, we would play together on the weekends. Javier Fernandez is a phenomenon to me. I've known him since we were about twelve years old spending summer training camps together and competing against each other. Watching him develop in the way he did over the last eight years was just astounding. I was so happy to see him win the world title this year especially after missing out on an Olympic medal in Sochi. Cheng Peng and Hao Zhang have also just blown my mind this past season as both their programs were up there with my favourites alongside the short program of Sui and Han and Jason Brown's free skate. The way Cheng has developed as a skater has given that team a whole new dimension and Hao is just such a nice skater to watch and cool guy to see at competitions.

A: One thing people may not know is that I am very politically interested and currently pursuing a bachelor's degree in political science. 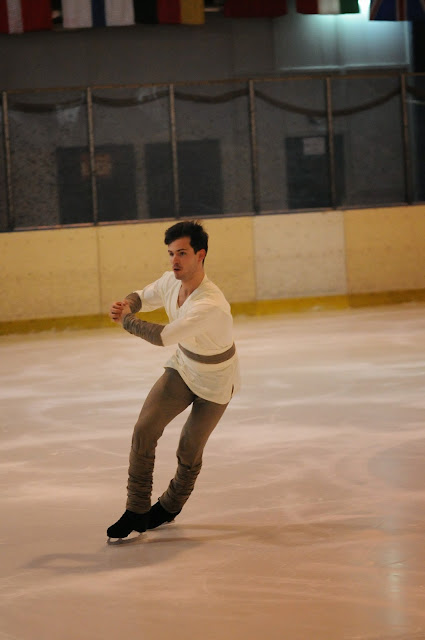 Q: What is the biggest lesson that skating has taught you about life?

A: It's so true that you learn a lot more from failures than you do from successes in that I've learned to put things into perspective and take positives out of almost every situation... however dire they may seem. Pairs has really taught me a lot about relationships and psychology. As a singles skater, I only had to worry about myself (and to a lesser extent about my coaches) but in a pairs team so much depends on how you interact and react to each other. I am quite an analytical person which has helped me immensely in dealing with difficult situations on the ice. I believe that skill, which I have developed over the past couple of years, will be very helpful later on in my personal as well as professional life.

Enjoy this interview with Severin? Why don't you take a moment and "like" this blog on Facebook at http://www.facebook.com/SkateGuard. You'll get all of the new interviews and blogs as they get posted, pictures and news from the skating world and lots of great videos! You can also give me a follow on the Twitter at http://twitter.com/SkateGuardBlog. I love talking skating and would love to talk skating with you!
Posted by Skate Guard Blog at June 11, 2015
Email ThisBlogThis!Share to TwitterShare to FacebookShare to Pinterest
Newer Post Older Post Home