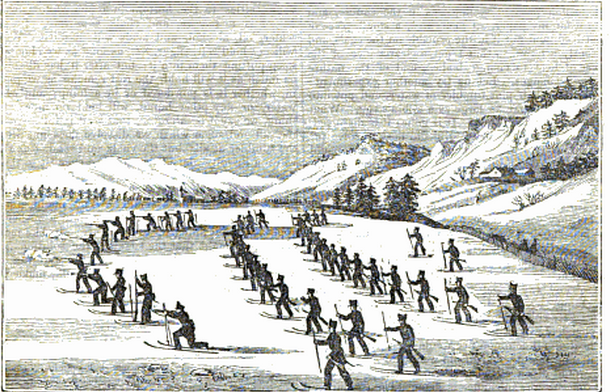 As we learned in "The Qianlong Emperor And Wu Tongxuan: Chinese Skating's Royal Connection" and the most recent Skate Guard blog "Don Frederic And The Dutch Musketeers: A Battle On The Ice", skating and the military haven't exactly been strangers over the years. Considering the climate and the country's important role in the historical development of the sport, it can hardly come to anyone's surprise that the Norwegians too have a military skating tale in their dusty history books.

Edward L. Gill's 1862 book "The skater's manual, a complete guide to the art of skating; with rules for plain and fancy skating; hints to beginners; sketches of the skating clubs and ice-ponds of New-York, Brooklyn and Jersey City; rules and regulations of the Central park skating-pond; fashions for ladies' skating costumes; together with four interesting matter" (how's that for a title?) tells the story of a regiment of soldiers called The Skate Runners who were stationed in Drontheim, Norway in the early eighteenth century who used both skis and skates to do their dirty work.

Gill explained that The Skate Runners "wore long gaiters, for travelling in deep snow, and a green uniform. They carried a short sword, a rifle fastened by a broad strap passing over the shoulder, and a climbing staff seven feet long, with an iron pike at the end. They moved so fast in the snow that no cavalry or infantry could overtake them, and it did no good to fire cannon balls at them, as they went two or three hundred paces apart. They were very useful soldiers in following an enemy on a march. They could go over marshes, rivers and lakes, at a great rate."

The Skate Runners had a significant connection to the aftermath of a regicide. When King Charles XII Of Sweden was shot and killed in 1718 (some believe by his own men in a coup) "one of The 'Skate Runners' carried the news four hundred miles twelve hours sooner than a mail messenger, who went at the same time. There were then seven thousand Swedes laying siege to Drontheim. When the news came, they broke up their quarters and retreated as fast as possible. They were obliged to go over the mountains, and the snow was deep and the weather exceedingly cold. Two hundred 'Skate Runners' followed hard after them, and came up with them one very cold morning. But all the troops were dead, having been frozen in their tents, among the mountain snow drifts. They had burnt every morsel of wood - even the stocks of their muskets - to warm themselves."

"The Saturday Magazine, Volume 8" published in 1836 confirmed that the troops in fact did use crude skates for a good part of their journey when crossing ice. This article added that "it was natural to think of forming a military corps of skaters... During the former wars with Sweden, all the Norwegian light troops... have been particularly trained to the use of these kind of skates... Previous to the union between Norway and Sweden, there existed in Norway two regiments of skaters - one in the district of Drontheim, and in the other in that of Aggerhuus" but explained that military losses by the Norwegians drastically reduced the number of skating soldiers. How and when The Skate Runners finally dissolved is a puzzle I couldn't quite solve but nevertheless one has to admire the daring and perseverance of the great outdoors for a cause they believed to be important. Another one for the skating history books!

Did you enjoy reading about The Skate Runners? In order for this blog to reach a wider audience, I could sure use a little help. All you have to do is "LIKE" the blog's Facebook page at http://www.facebook.com/SkateGuard for instant access to all of the new blog articles, features and interviews as they are made available. I also share daily updates and headlines from the skating world, videos and much more that's not here on the blog, so if you love figure skating as much I do, it would really be rude not to get on that inside edge! You can also follow all of the fun along on Twitter at http://twitter.com/SkateGuardBlog. If you know someone who loves skating, tell them! It's all about getting a dialogue going on! Fabulous skating is too fabulous to keep secret.
Posted by Skate Guard Blog at June 14, 2015
Email ThisBlogThis!Share to TwitterShare to FacebookShare to Pinterest
Newer Post Older Post Home